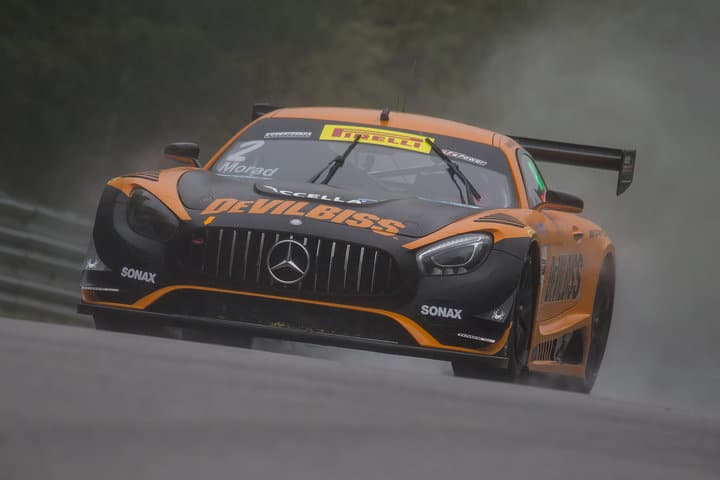 CRP Racing’s Daniel Morad led flag-to-flag Saturday in adverse conditions in order to claim his first Pirelli World Challenge GT Sprint victory Saturday at Canadian Tire Motorsports Park.  For Morad, who lives in Toronto, it is a victory at home.

“I was surprised at how well the Pirelli tires were staying together considering the track was nearly bone-dry at the end of the race,” Morad said after the race.  “It was the grace of tire management that helped.  It seemed like a little bit of deja vu between Scott [Hargrove] and I because in [IMSA Porsche GT3 Challenge Cup] we used to run here, and we used to be first and second and go down in the first turn.  But it never ended like it did here today.  It used to end in tears and today, it didn’t.  It’s nice to be here.  I’m local, and I have all my friends and family and sponsors here to see it.”

The start of the race was delayed for over two hours due to heavy fog.  When the race finally started, it was still fairly foggy, but it was not raining.  Regardless, the field started on rain tires.  From the drop of the green flag, Morad was able to pull away from the pack.  Even without rain falling, there was still a decent amount of spray (as seen above).  Slowly but surely, Morad pulled away from a battle for second between Scott Hargrove and Michael Christensen.  The two Porsche drivers dueled for the vast majority of the race.

Morad’s lead peaked at 25 seconds over the Porsche duo, but a drying track meant that Morad’s Pirellis started to chunk and lose their usefulness.  As a result, he had to back off in order to make it to the finish.

Meanwhile, TR3 Racing’s Daniel Mancinelli ran down the aforementioned Porsches late in the race.  Christensen was able to get by Hargrove for second as the points leader faded.  Mancinelli was also able to get past late.

Up front, Morad was able to hold for the win.  His margin of victory was 4.576 seconds over Christensen.  Mancinelli was another 12.5 seconds back in third.  Hargrove was fourth, followed by R. Ferri Motorsport’s Toni Vilander.

In GTA, TruSpeed AutoSport’s Parker Chase started from fourth overall and maintained the class lead early on.  While he dropped back to fifth overall, he was able to keep Yuki Harata at bay.  As the track dried out, Harata dropped like a stone after having struggled for pace on Friday.  That allowed Chase to pull out to a big lead.

Squadra Corse Garage Italia’s Martin Fuentes was much better once the track dried and quickly dispatched of Harata.  In the closing laps, he ran down Chase for the lead, but ran out of time as the 17-year old Texan held on for the win.

Fuentes was just over a half-second behind at the finish.  Harata finished third, but he was a full 25.5 seconds behind Fuentes.

K-PAX Racing was caught out by the weather.  Saturday was literally the first time that the team had run the Bentley Continental GT3 in the wet, so the team didn’t really have a good setup.  As a result, they didn’t really race competitively.  They just waited for the track to dry out.

Sure enough, a dry line started to develop in the second half of the race.  With 17 minutes remaining, Àlvaro Parente pitted from eighth to switch to slicks right around the time that times were dropping into the 85-second bracket.  On the slick tires, Parente was able to turn in much faster times than the rest of the field.  He only managed to make it to sixth by the finish, but he turned in a lap of 78.900 seconds (112.198 mph).  That lap was more than five seconds quicker than anyone else in the class and gives Parente the overall pole for Race No. 2 on Sunday.  He’ll be joined on the front row by teammate Rodrigo Baptista, who used a similar strategy as Parente to claim the GTA pole.  None of the other teams decided to change to slicks during the race.

GT/GTA Race No. 2 is scheduled to go green at 4:05 p.m. on Sunday.  The weather is forecast to be much warmer with highs around 70 degrees and sunny skies.  More important, there will be no rain.  Given Friday’s practice sessions, it should be a very competitive race.  The race will be streamed live at World-Challenge.com.