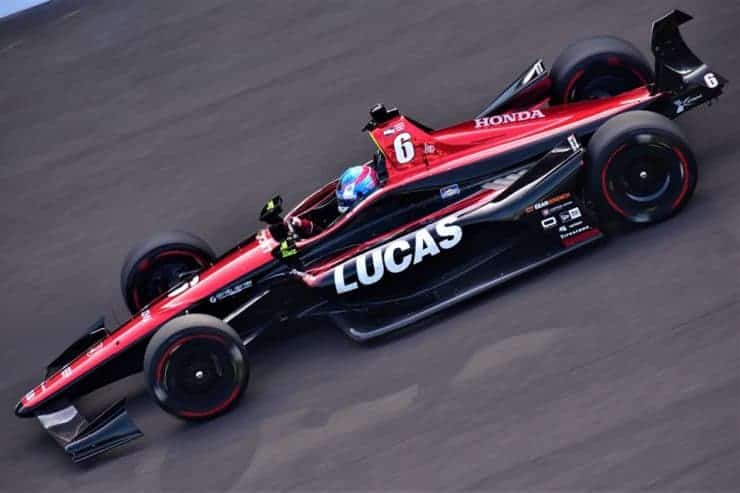 Following Saturday’s opening qualifying session for next Sunday’s Indianapolis 500, four rookie drivers will officially make their first attempt at winning the Indy 500. The dreams of Matheus Leist, Robert Wickens, Kyle Kaiser, and Zachary Claman De Melo will come true, at least part of it will.

The rest of that dream, of course, is to win the race itself. That’s something only nine other rookie drivers have done. The aforementioned four drivers will have to do everything right in order to drink the milk at the conclusion of next Sunday’s event.

Matheus Leist is making his first Indy 500 start with legendary team owner A.J. Foyt. Foyt has four Borg-Warner Trophies in his trophy case as a driver and three as an owner. Leist has five starts in the Verizon IndyCar Series with a best finish of 12th at Barber Motorsports Park earlier this season. He was 12th fastest during Saturday’s qualifying session and is looking to better that position on Sunday.

“Qualifying was pretty good I think, I was pretty comfortable in the car and I’m happy with the performance and happy with the effort of all the ABC crew, I think they did a great job today,” said Leist. “We’ll see how it goes tomorrow. It was a tough run because the conditions changed so much from yesterday. Yesterday I had one car and today I had a different car but the good thing is that we were still fast. We had a little bit of understeer in Turn 1 and 2 and we were a little bit edgy in (Turn) 3 and 4, but I had my tools so I could control the car. I think I and the team did a great job together.”

The hottest rookie right now has to be Robert Wickens. Wickens has already blasted onto the scene with Schmidt Peterson Motorsports and is looking to continue that run next Sunday. Already in five starts, Wickens has tallied two podium finishes and one pole. The statistics make him a sure favorite to earn Schmidt Peterson their first Indianapolis 500 win as an organization. Even though Wickens and his team have shown strong speed all season long, Wickens was 20th fastest of the 35 cars and will also look for improvement during Sunday’s qualifying session.

“I think we lost some speed overnight, which is always frustrating,” said Wickens. “On Fast Friday, we were right in the mid-227s or low-227s and now we can’t even make it there, so we have some work to do. I don’t think that rain delay could have come at a worse time. We got the Lucas Oil car all hot and ready, did one timed lap and had to stop [for moisture on track]. It rained but it’s not cold outside, so everything is hot and the engine’s not making great power because it’s just hot. We did what we could, but I feel like I didn’t get a fair chance. I know there’s more speed – it’s frustrating because I honestly think we had a shot at the Fast Nine today.”

Kyle Kaiser, the 2017 Indy Lights Series champion, will make his first Indianapolis 500 start next weekend with Juncos Racing. Kaiser has made three starts so far in the Verizon IndyCar Series with his best finish coming at Long Beach where he finished 16th. Kaiser wasn’t far off of Wickens speed as he was 21st in his Juncos Racing Chevrolet.

“Overall, I am ecstatic right now,” said Kaiser. “We had such a great day. Rolling in, the guys made a few changes to the car from yesterday and we only had to qualify one time and the NFP Chevy car had the pace. I am just so happy with the team and the all the hard work they’ve done and put in. I am very excited to say that I will be in the Indianapolis 500 this year.”

Zachary Claman De Melo wasn’t even slated to run the Indianapolis 500 this season as Pietro Fittipaldi was expected to pilot the No. 19 entry. Fittipaldi suffered fractures to both legs as a result of a crash while qualifying for the 6 Hours of Spa Francorchamps in Belgium. As a result of Fittipaldi having to sit out, De Melo got the call to fill-in for him in the biggest race of the season. It will be his sixth career race in IndyCar and fourth of the season. His best finish so far came in the Indianapolis G.P. last weekend where he finished 12th. He was 26th fastest and as the others will look to better that Sunday during qualifying.

“I definitely would have liked to go later in line,” said De Melo. “It’s difficult to go first having never qualified here before in an Indy car. There were a lot of unknowns going into qualifying for me, I kind of figured them out now. It wasn’t really the qualifying we wanted. I wasn’t too pleased with the car. It was easy to drive but we didn’t have the speed. That said, we have a good race car so we should be fine and we have another chance tomorrow to improve our starting position.”

Once each of these drivers takes the green flag tomorrow to begin their qualifying lap, it begins a road that could lead to victory lane and their name in the history books forever. Afterall, the hardest part of the road is behind them.