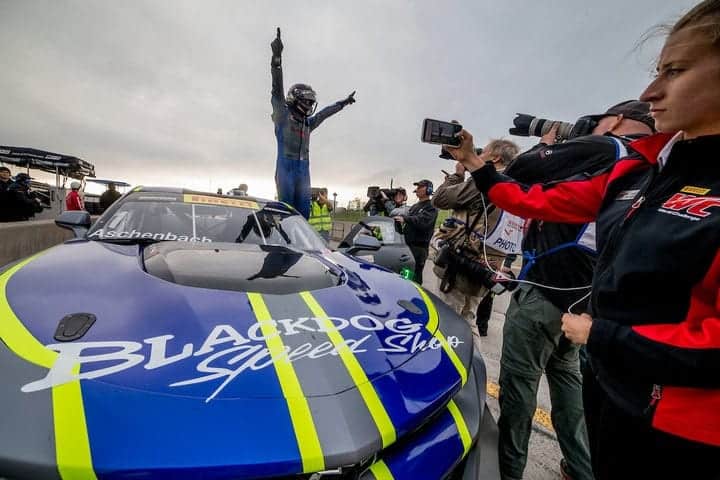 Blackdog Speed Shop’s Lawson Aschenbach remained perfect for the season in GTS Sprint races on Sunday morning (May 20), holding on to take his fourth consecutive victory at Canadian Tire Motorsports Park.  Unlike race No. 1 on Friday, Aschenbach had to work hard to claim his trophy in his Chevrolet Camaro GT4.R.

“First off, we’ve got a Chevrolet Camaro [GT4,R].  That’s why we won today,” Aschenbach told CBS Sports Network’s Pilar Lastra after the race.  “Ian [James], he was running me hard.  He jumped me on the start, pulled in front of me and took off.  I don’t know what was going on there.  Luckily, I was able to get him back and hold him off.”

Aschenbach claimed after the race that James had the quicker car.  Lap times seemed to indicate that it wasn’t the case.  In fact, the two drivers were a perfect match for each other.  James snagged the lead on the start from Aschenbach.  The two drivers then drove away from the field.  Their lead over third-place was as much as 16 seconds before a caution brought the field back together.

Once the race resumed, Aschenbach and James ran away from the field once again to settle things among themselves.  On the final lap, James made a move to the inside of Aschenbach, but could not prevent the veteran from taking his fourth straight win.

Unfortunately for James, his No. 50 Panoz Avezzano GT4 flunked post-race technical inspection due to an issue with the catalytic converter.  As a result, James was excluded from the race.

In GTSA, the race seemed to be a benefit early on for JCR Motorsports.  Fred Roberts led from the pole early on before teammate/car owner Jeff Courtney was able to take the advantage.

Meanwhile, Ian Lacy Racing’s Drew Staveley came from 17th overall on the grid (ninth in GTSA) to charge up towards the front.  By half-distance, Staveley had already moved his Ginetta G55 GT4 up to third.

Saturday’s winner Mark Klenin was running fourth in class when he spun exiting turn 3 and hit the wall to bring out the only full course caution of the race.  Klenin was able to walk away from his McLaren, but the No. 62 was heavily damaged.  Getting the car repaired in time for Lime Rock may be quite tricky.

GTS and GTSA teams don’t get much time to rest.  In fact, most of the teams will not return to their shops.  They’ll go straight from CTMP to Lime Rock Park in Connecticut for the third SprintX weekend of the season.  Frontstretch will be on-site at Lime Rock all Memorial Day weekend (except for Sunday, since there is no racing on Sundays at Lime Rock) to cover the action from the 1.5-mile road course.