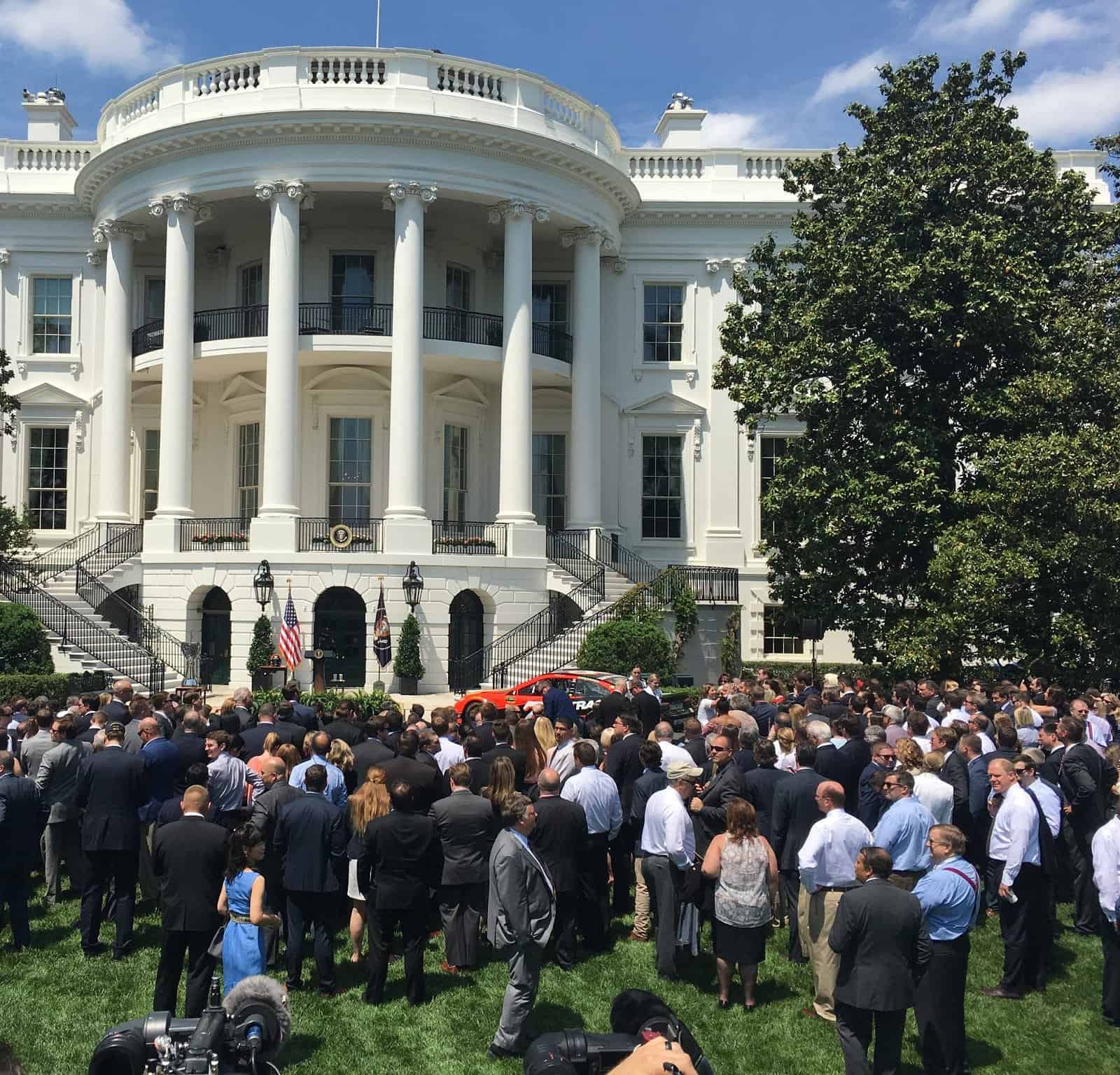 Martin Truex Jr. and the No. 78 Furniture Row Racing team are honored at the White House in Washington, D.C. on Monday May 21, 2018. (Photo by Davey Segal, Frontstretch)

The ceremony began just before 2:30 p.m. ET and included remarks from President Trump and Truex Jr.

“Mr. President treated us like family,” Truex said of the visit. “Showed us around, showed us things that most people don’t get to see, just what an honor to be here to represent NASCAR, the entire industry and our sport. Our race team […] really just an unbelievable day. Can’t say how honored we all are to be here for this and thankful for Mr. President recognizing our accomplishment from last season.”

"Mr. President treated us like family. Showed us around, showed us things that most people don't get to see, just what an honor to be here to represent @NASCAR, the entire industry and our sport."@MartinTruex_Jr | @WhiteHouse pic.twitter.com/Na15upbLq8

Truex said he got a tour of the entire White House, including the Oval Office and the location where the Gettysburg Address was written by Abraham Lincoln.

“Seriously to think about how long ago that was written and what it meant, oh my god it was amazing to see,” he said. “Seeing it all, seeing the whole White House, the whole behind the scenes tour from the POTUS, I mean what an honor. It was unbelievable.”

“The world has changed because of decisions made here, it’s crazy. It gives you goosebumps.”

.@realDonaldTrump, @MartinTruex_Jr and @SherryPollex walk to the South Lawn at the @WhiteHouse to celebrate the 2017 #NASCAR Cup championship. pic.twitter.com/bGd9uOJPLJ

President Trump, who has had support from some major players in the NASCAR garage such as Ryan Newman, Chase Elliott, David Ragan, Bill Elliott, Mark Martin and others, made sure to thank NASCAR Chairman and CEO Brian France for his undying support.

“Martin, I have to say your car looks truly amazing,” Trump said. “In fact, I want to get in that thing and just drive it right away. Do you mind? But it’s just beautiful. It’s incredible.”

He also made sure to address Furniture Row Racing team president Joe Garrone and crew chief Cole Pearn. Even though Pearn does not change tires, Trump may or may not have thought he did.

“Chief, pretty tough job, right?” he jokingly asked Pearn. “How do you change those tires so fast chief, huh? Are you born with that talent, or can you learn it, or sort of both?”

Regardless, it got a chuckle out of the crowd on hand on the South Lawn.

“Your determination in the face of adversity has been an inspiration to millions of Americans who know what you’re going through,” Trump told Pollex. “You are Sherry Strong. We’re praying for you and we’re deeply honored to have you here today, and Martin, I can tell you, is so proud of you.”

NASCAR made headlines last season when Richard Petty spoke out against kneeling during the playing of the National Anthem. Trump made sure to address that issue, possibly taking a dig at the NFL, who has seen multiple players kneel in the past two seasons.

.@POTUS: "I will tell you one thing I know about @NASCAR, they do indeed Brian, stand for the playing of the National Anthem." pic.twitter.com/dGK6jJflzz

“I love it. People love that sport. this lively sport reflects our national spirit and can-do attitude,” Trump said. “Never give up is the story of the No. 78 team. It’s the story that’ll be told in NASCAR’s incredible history with this team.”

.@NASCAR Series Champion @MartinTruex_Jr presents @POTUS with a replica of the helmet he wore. pic.twitter.com/trpE6X5qpv

“I was within fingers reach of a red button,” Truex joked about the visit. “The way he welcomed us in today, and he went above and beyond, to take us around and show us things he didn’t have to, take pictures with the team, it’s way more than you’d expect by someone at that level in that position, its amazing.”

After his visit to the nation’s capitol, Truex will look to earn his second career Coca-Cola 600 victory at Charlotte Motor Speedway. And after a start to the 2018 season that has left a bit to be desired, the Mayetta, NJ native may have found some extra motivation.

“People have asked me ‘now that you’ve won one championship, is the desire the same, do you want it as bad, and I’ll tell you especially after things like today, you want it more,” Truex said. “You want it worse. That fire burns more than it did before because you know what it’s like, you know what it means. I’m fired up. Ready to go to the 600 this weekend.”

Maybe a lot of people don’t watch nascar races but what you see with Truex and his team shows more class than all the other pro sports combined. And yes, we do stand when the national anthem is being played!