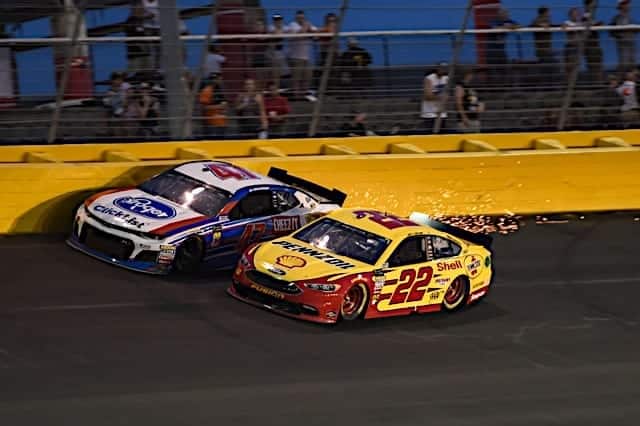 For the Open, it’s the best opportunity for underdog teams to win an event all season. Most of the top winners in the sport are already locked into the All-Star Race, so they don’t compete. And with three stages lined up for this year’s Open, two more top teams (Alex Bowman and Hendrick Motorsports, Daniel Suarez and Joe Gibbs Racing) would be taken out of contention, opening the opportunity even further for the final stage winner.

And after the Open wrapped up, one underdog in Matt DiBenedetto would find out if his weeks of effort would pay off with the Fan Vote into the All-Star Race.

These two paths gave positive and negative results. The first was a positive with AJ Allmendinger, who won the final stage of the Open to advance into his fifth All-Star event. The second was a bitter negative with DiBenedetto missing out on the Fan Vote by Chase Elliott.

But there were plenty of middlemen who exit the weekend similar to how they entered it. The restrictor plate package won’t be in effect for next weekend’s Coca-Cola 600, so there’s very little to transfer from this weekend to that. But it doesn’t lessen the momentum or the gut punch for any underdog team moving forward.

Allmendinger’s drastic last-lap pass led him to the win in the Monster Energy Open. Starting mid-pack in ninth, the No. 47 JTG Daugherty Racing driver almost immediately sprung forward, gelling with the new package seemingly more than most on the track.

He was a regular among the top four throughout the first two stages, and when Bowman and Suarez dropped out after their wins, Stage 3 had his name on it.

But it didn’t come easy with Hendrick and JGR chassis’ yet to pass in Turn 1.

“[crew chief] Ernie Cope told me to bring it back with the steering wheel or we’re winning this thing,” Allmendinger said. “I made a conscious decision right there; we were crashing or I was going to win the thing.”

The win was his first of the event in 10 years, last winning in 2008 with Red Bull Racing.

“I don’t care how many cars are in the field, to win get in the All-Star Race, [it’s] more important for our guys,” he said.

Mentioned earlier, a non-point, one-off packaged event can still lead to much momentum moving forward to the 600. Allmendinger and JTG have led the underdog teams a few weekends this year, however, haven’t made as many gains as predicted preseason. For AJ, only two top 10s in 12 races place him just 23rd in driver points.

The tough results were expected to continue this weekend, especially given the unknown of the plates for the Open. But that was far from reality. Allmendinger not only won the Open but brought the speed to the main event, jumping from the rear of the 21-car field to the top five by the end of Stage 1 of the All-Star Race.

And on lap 21, Allmendinger pulled off one of the more daring passes of the night when he squeezed through the outside of Joey Logano for fourth spot (pictured above).

The aggressive rim-riding bit the No. 47, however, as he slapped the wall on lap 13 of Stage 2, falling from fourth to 13th. And two laps later, he pitted under green, falling a lap down.

That lap was given back shortly after at the stage break, but Allmendinger never returned to the front, finishing eighth on the night for his best All-Star Race finish.

“I can’t thank everyone on a race team for working so hard,” he said. “We’re not where we want to be but we’re getting better.”

Of the 21 cars in the race, only two were underdogs. The other was Kasey Kahne and Leavine Family Racing, who finished 10th. Kahne had a battle of a night after hitting the wall hard on lap 57 of 93, falling four laps off the pace.

But they all came back eventually, as the No. 95 won the free pass four times through a rash of late cautions and ended up back on the lead lap for the final restart. Quite the comeback for the 2008 winner.

To kick it off, Matt DiBenedetto was among the top guys hoping Chase Elliott would win one of the Open stages Saturday evening… if it wasn’t himself that is.

But the Open has proven to be a tough one to conquer in Elliott’s past and it continued this year, finishing third overall. But for the third straight year, the fans were on his side and voted him a spot into the All-Star Race, leaving DiBenedetto, who finished the Open 12th, without a spot.

The Go Fas Racing driver put it all on black in the weeks leading up to the Open, once again using social media to his advantage like he was running for office. But it just didn’t work out this year, as Elliott has seemed to secure himself as the sport’s next most popular driver after Dale Earnhardt Jr.

Chris Buescher joined his JTG teammate Allmendinger near the front of the Open, finishing fifth in his No. 37 Chevrolet. A good run, but not enough.

The Camping World Truck Series had the first run on the track this weekend, running their North Carolina Education Lottery 200 Friday night. Stewart Friesen again showed some top speed, finishing sixth in his No. 52 Chevrolet.

Disappointed in the result but thankful for everyone’s support. Big thanks to @zyngapoker as well! pic.twitter.com/nKsrVKtAcD

Surveying the damage after the race pic.twitter.com/siYogYFPHe

Why should Matt DiBenedetto be awarded a free pass to the All-Star race? He is an underdog because he is a mediocre driver at best. He is “popular” only because he uses the entire Reddit community to cheat for him, as Josh Wise did a few years ago. If Chase had won his way into the Big Event, isn’t it just as likely that Bubba Wallace would have polled his way in? In fact, Wallace made a tactical error in racing side by side with his pal in Segment 3, opening the door for the incompetent Allmendinger to force his way in. An Elliott win would have gotten them both in, leaving AJ and Matt on the outside where they belonged.

And of course, AJ did himself proud in the Main Event by wrecking. But that’s the only contribution any member of your Underdog House ever makes to a race!