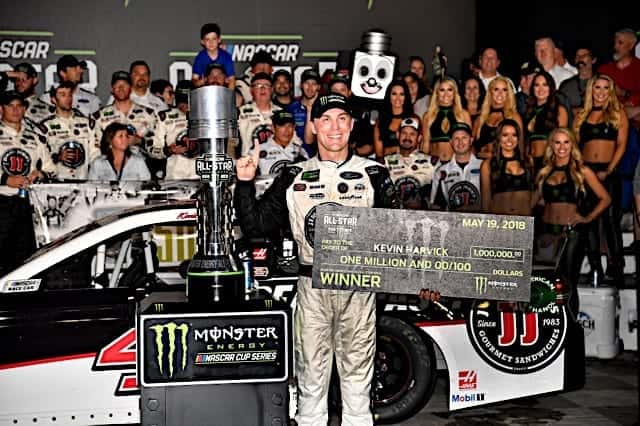 Kevin Harvick continues to flex his muscle as the best in the sport in 2018. Harvick won the second All-Star Race of his career Saturday night, with his other win coming over a decade ago in 2007. And in about as dominating a fashion as anyone could in a race where cars could not get away from each other. Harvick won by more than a handful of car lengths when it was all said and done.

Harvick won the first stage, Kyle Busch took the green/white checkered flag first in stage two. In the Open, it was Alex Bowman snagging the first stage and advancing to the All-Star Race. Daniel Suarez took stage two and AJ Allmendinger was the ultimate winner of the Open.

Matt Kenseth and Ricky Stenhouse Jr. swept the front row for Roush Fenway Racing but were all but irrelevant shortly after the drop of the green flag. Kurt Busch spun out in the middle of three-wide going into Turn 3 on lap one to bring out the only caution of the stage. Harvick led the final 25 laps of the stage before the No. 4 team stumbled on the pit stop after the stage. That opened the door for Kyle Busch to lead all of the laps of the second stage after Martin Truex Jr. led the first one after the restart.

In the third stage, Kasey Kahne got loose coming through the quad-oval after a nudge from Bowman. Kahne’s hopes for a surprise victory were out the door after the contact. Bowman’s night ended shortly later when he lost control off of Turn 2, putting the right rear into the fence and ultimately the No. 88 to the garage. Brad Keselowski and Truex traded the lead at the beginning of the stage before Kyle Larson took over the top spot on lap 70 by staying out on Bowman’s caution flag.

Denny Hamlin went to the point when the race went back to green and was there when Ricky Stenhouse Jr. got into Truex and triggered an eight-car pile-up in Turns 3 and 4, taking away potential wins for several contenders. When the race went back to green again Larson retook the lead before Harvick wrestled the top spot away coming back to the checkered flag to finally end the stage 13 laps longer than it was scheduled.

In the final stage Harvick held onto the lead during the initial restart and fended off all attackers for his lead over the final laps. During the stage Joey Logano and Larson made contact. Logano bounced off of the wall and then turned Larson, spinning him through the infield. When the race went back green the final time, Harvick dominated and pulled away from his challengers.

The aero/engine package for the All-Star race created intense, close quarters racing all night long and had the fans on the edge of their seats. For the short term it looks like it could be a great option for intermediate tracks, although once the teams get to work with it the results might not be as spectacular. Restrictor plates aren’t the answer for everything but they most definitely were a help Saturday.

The talk about the excitement of the racing from the All-Star race was predominantly about the racing that took place all night long. Three and four-wide racing throughout the event kept all of the fans on the edge of their seats. This was obviously a trial balloon by NASCAR to see if this package would spice racing up on intermediate tracks. Plates on all tracks is not a good idea from a damage perspective for race team owners, but it absolutely put on a heck of a show.

NASCAR issued a new rule this week that teams do not have to start the races on the same tires they qualify on. Teams will have an allotment of tires for practice and qualifying and will be allowed to carry one set over to the race. If a team does not put laps on their qualifying tires, they will be required to carry a scuff set of tires over to the race.

We hear a lot about the foundations that drivers start for various reasons and to help an assortment of causes. The Martin Truex Jr. Foundation does a lot for children and ovarian cancer. He and Sherry Pollex, his longtime girlfriend who has battled ovarian cancer more than once, put on their Catwalk for a Cause event again this weekend. They do not have the final numbers of the funds raised, but an example of what they do took place at the end of the night. Sherry and Martin made a donation of $1.2 million to Novant Health to help open the Martin Truex Jr. Foundation Children’s Emergency Department in Huntersville and the SherryStrong Integrative Medicine Oncology Clinic in Charlotte.

Larson had a car that appeared capable of winning on Saturday night. He was at the front at the end of stage three and was trying to get everything he could going for the million dollars at the end, but he drove Logano into the fence off of Turn 4. Logano retaliated and spun Larson through the infield, essentially taking him out of contention. Larson said post-race that he’d like to be mad about being spun but he admitted he put Logano in the fence so it was understandable.

Kurt Busch didn’t even get going on Saturday night before his team was making repairs. Busch went into Turn 3 on the first lap and spun, backing into the fence. Busch ultimately was swept up in the Big One as well. The former All-Star winner continues to be bitten by bad luck ever since winning the Daytona 500 last season.

Suarez showed again why people believe he is going to be a star in this sport in the future. He raced his way into the All-Star race and then put himself firmly in the mix for the win all night long. After a few struggles to start the year, the former XFINITY champion is looking like he has the potential to win before the year is out.

Chase Elliott not only won the fan vote to move into the All-Star Race, something almost everyone assumed would happen if he didn’t race his way in, but then had a solid effort resulting in a fifth-place finish. Chevrolet still has work to do this season but Elliott has been the best in the Hendrick stable for much of the last year and he just might be headed to that spot again.

Kevin Harvick won the All-Star race for the second time in his career.

Harvick is the seventh driver to win the event more than once.

Daniel Suarez came home in second in his first start in the exhibition race.

This is the third time Logano has come home in the top three in the All-Star race.

The NASCAR experiment that was the restrictor plate/high drag package certainly seemed to be a success. Cars were able to draft and pass. The excitement level was at a fever pitch, until the very end when Harvick ran away and hid. That said, this was one of the best All-Star races in a decade at least. We’ll give this one five cold Lazy Bird Brown Ales from Bird Song Brewing Company.

The longest race of the year is on tap next weekend at Charlotte Motor Speedway. Racing coverage is on FOX starting at 6 p.m. ET Sunday, May 27. It can also be streamed on the Fox Sports Go app. If you like to listen to the race or you aren’t near a television, you may listen on your local PRN affiliate, www.goprn.com or SiriusXM NASCAR Channel 90.

Not a bad race… Kevin Harvick kept it from being as exciting as it could have been, but you can’t blame his team for being so dominant. As for the restrictor plates, yeah, it helped the racing, but I still don’t like them. Move the race to Darlington and scrap the plates.

As a temporary fix, I’ll give the package a thumbs up. This was the best All-Star Race/Open in years. I wish they would try it out at Indy this year, since the longer straights should make drafting/slingshoting easier. Still the long term goal should be new car designed for low-down/sideforce from the ground up, so you can get competitive racing without the need for plates. This package is a band-aid not a cure.

LOL good one Upstate9fan!!!
Sort of like they were band-aids to keep speeds down and cars on the ground for Talladega and Daytona.
Now, many, many lifetimes later, they are still here.

Nascar’s problem : the guys who break the rules are smarter than the guys who make the rules.
This leads to dominant teams that take away the hope of more winners. Ford was supposed to be the hopeless also ran this year but that is a joke. Maybe the sand bagging was responsible for rules changes that
were supposed to “level the playing field” Ask Chevy how well that worked
Look harder, Nascar look harder you have enough problems without creating domination on the part of one or two teams

Stenhouse didn’t get into Truex. Truex ran Stenhouse down onto the apron and then moved back up a bit. Truex and Stenhouse never hit. Truex got loose and the rear started to go around. Truex caught it and went up into Bowyer’s left rear with the right front. Bowyer spun and Truex spun and went up the track and said Hello to Kurt.