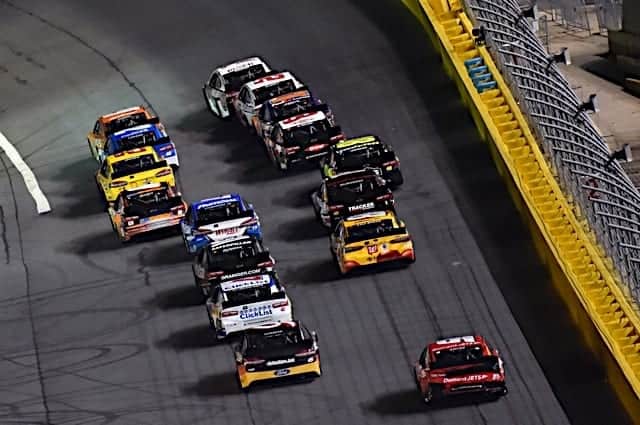 For the better part of the last decade, a lack of excitement plagued NASCAR’s All-Star Race.  The event for recent Cup Series winners rose to fame as a no-holds-barred showdown in which drivers would throw caution to the wind racing for big money and bragging rights.  However, the lasting memories of recent All-Star Races are mostly runaway winners and convoluted formats that NASCAR itself could not seem to keep straight.

Saturday night’s race was, if nothing else, a welcome break from the strung-out fields that are typical of NASCAR’s intermediate track races.  The sanctioning body tested a new variant of its high-drag aero package in an attempt to bring closer competition to the racing at Charlotte Motor Speedway.  This aero package included the use of restrictor plates.  As a result, fans received a style of racing that incorporated elements of pack racing, with drafting having a major influence.  Passing the leader was still difficult at times, but drivers had a greater ability to move through the pack than what we will probably see at the Coca-Cola 600 next week.  While the high-drag aero package needs more work, Saturday’s race was a step in the right direction.

Although Saturday’s event was a race for Monster Energy NASCAR Cup Series drivers, it was easy to feel the influence of NASCAR’s other national divisions on the type of racing we saw at Charlotte.  The All-Star aero package is based on a similar concept that NASCAR used for the XFINITY Series race at Indianapolis Motor Speedway last year.  The goals for the Indy XFINITY race were the same: increase the effects of the draft in order to keep the field bunched up and improve passing opportunities.  Just like the All-Star Race, last year’s XFINITY contest at the Brickyard produced better racing than its predecessors.

It also felt as if NASCAR was taking cues from the Camping World Truck Series in developing this aero package.  Often times, the trucks put on the best racing of the three series on the intermediate tracks.  Since the trucks are boxier and have the lowest unrestricted top speed, they tend to naturally mitigate a lot of the aero sensitivity that NASCAR’s cars experience.  The All-Star Race may well have been an experiment to make MENCS racing more like Truck racing, at least on the intermediate tracks.

This past weekend revealed one of NASCAR’s strengths: the ability to test concepts from one or more national series and implement them in another.  There is no better laboratory than the race track to experiment with new aero packages, especially in a non-points event.  Having three divisions with a lot of the same competitors and venues gives NASCAR three times the opportunity to try new things on a public stage and gauge feedback from fans and teams.  If the sanctioning body is able to find something that works for one division, it is less of a challenge to implement it in the other two.  Had NASCAR only looked to the Cup Series for ideas about how to improve the All-Star Race, the high-drag aero package experiment would not have happened.

However, managing three nationally-recognized divisions comes with a challenge.  If NASCAR were to make its top three series too similar to each other, the value of all three would decrease.  While the sanctioning body should continue its cross-divisional experimentation, it should not compromise the individual uniqueness of each series.

The Truck Series, in particular, has turned into something far different than what NASCAR originally intended it to be.  Once a quasi-regional division based on visiting Western short tracks and road courses, these days truck teams spend most of the season tagging along with the Cup Series to companion events at bigger tracks.  That made sense back in the mid-2000s when 20-25 trucks with a reasonable amount of financial backing would show up to each race.  But as sponsors and budgets have declined, the Truck Series is more focused than ever on aero-dependent tracks.

Just because the Trucks have put on good races at intermediate tracks does not mean that the series needs to visit Las Vegas Motor Speedway or Texas Motor Speedway twice a year.  Future experimentation with the Truck Series should focus on promoting more events like the ones at Eldora Speedway and Canadian Tire Motorsports Park.  Short tracks and road courses are the best matches for the kind of racing that NASCAR hopes to promote with the Truck Series – tough competitors racing tough vehicles.  Bringing back the short tracks will bring back that identity as well.

As for the XFINITY Series, its identity problems and reputation as “Cup lite” has been well documented over the years.  NASCAR’s policy requiring competitors to pick one series in which to earn points has curbed the practice of Cup drivers moonlighting in XFINITY races.  More recently, participation guidelines have turned the focus of the second-tier division back to regulars.  With 10 different winners in 10 races, the 2018 XFINITY season has built up some good momentum, but there is still work to be done in terms of separating the XFINITY Series from the Cup Series.

One change that could help differentiate the XFINITY Series would be using a different points system than the Cup Series.  Ideally, NASCAR could experiment with a system that offered bigger rewards for winning or take a page out of the Formula One book and award points only to the top finishers.  The sanctioning body could even try a system in which the highest-finishing XFINITY regular gets the winner’s share of points, regardless of where that driver finishes.  While that may sound like a crazy proposition to some fans, it is not any less crazy than awarding points to drivers running in the top 10 at predetermined but otherwise inconsequential periods during a race.

In short, having three national divisions is an important part of NASCAR’s branding, and the divisions give its leaders a better ability to experiment.  But if NASCAR’s national series lose their identities and become too similar, then what is the point of having three of them from a fan perspective?  The future leaders of NASCAR, whether they are the France family and the present executives or someone else, will have to find a balance between concepts that work for one series and ideas that all three should incorporate.

Like I’ve said before, let them race 1979 Monte Carlos and T-Birds.

“Since the trucks are boxier and have the lowest unrestricted top speed, they tend to naturally mitigate a lot of the aero sensitivity that NASCAR’s cars experience.”