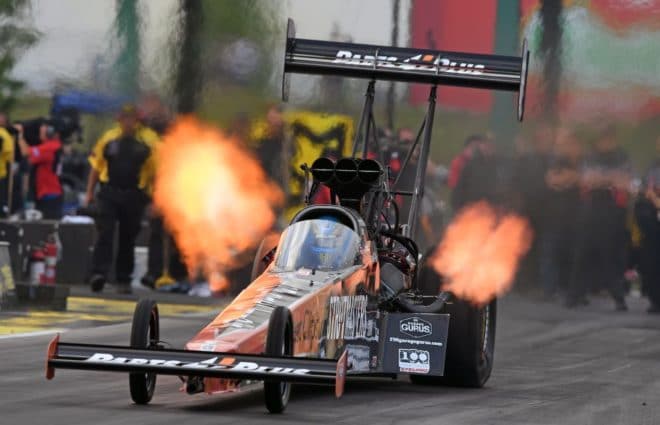 First things first, since the Menards NHRA Heartland Nationals from Topeka were interrupted by rain on Sunday, we did not get to give you the traditional recap in our Pace Laps column this week, so we’ll take care of that here.

By the time the action wrapped up on Monday, Clay Millican was holding his second Top Fuel Wally, Courtney Force had her third of the season and Deric Kramer was a first-time winner in Pro Stock.

Millican faced off in the finals against Terry McMillen, who was also looking for his second win. Millican ran a 3.727 second, 332.59 mph to best McMillen’s 6.169 seconds at 104.47 mph. Millican, who was the number one qualifier for the event, also got by Terry Totten, Doug Kalitta and Tony Schumacher en route to the matchup with McMillen.

Force, meanwhile, continues to dominate the Funny Car class. She faced off against her John Force Racing teammate Robert Hight in the finals and put down a run of 3.928 seconds at 329.83 mph to defeat her stablemate’s 4.087 seconds at 265.90 mph. Force beat Richard Townsent, Matt Hagan and J.R. Todd in earlier rounds and was also the number one qualifier.

Rounding out the slate of victorious number one qualifiers was Kramer in Pro Stock, who scored his first career Pro Stock victory. Kramer faced off against Erica Enders and put down a pass at 6.615 seconds, 209.36 mph to best Enders.

“I’ve been working a long time for this,” Kramer said. “The first win leaves me a little speechless, but I’m already looking for the next one. Always great as a driver to do your part, and I’ve certainly been doing that all weekend.”

Kramer got by Will Hatcher, Matt Hartford and Jason Line in earlier rounds of competition.

Kramer, and to some extent, McMillen and Millican, are the perfect representations of teams and drivers that are getting a chance to not just make races, but to win them — something that wasn’t a guarantee for them just a couple years ago. The same goes for Matt Hartford, another first time Pro Stock winner from this season.

As Steve Torrence demonstrated last season, you really can’t make a case for anyone’s chances at winning a championship before the Countdown starts, but Force is doing her best to stake her claim toward being the first female driver to win the Funny Car title. Incidentally, Funny Car is the only Mello Yello class remaining not to have had a female champion.

Let’s not leave Millican out of these musings. In his case, it just goes to show the value of having a crew chief who also has experience behind the wheel. Millican has said in the past that, from his perspective, it makes it easier to communicate with his crew chief, David Grubnic. It also makes it easier for Grubnic to understand what happens to Millican on the track, having experienced much of it himself.

“The car has been really good,” Millican said after Monday’s win. “Pretty much didn’t matter what I did because that car was going to win today. It’s just awesome with all of the work David Grubnic has put in. He found some consistency, which is what I’ve been saying all along.”

While IndyCar is having its big weekend and NASCAR has its longest race of the year, NHRA takes a pause over this Memorial Day weekend and returns to action the following week. That sounds like a perfect opportunity to revisit our ongoing history series next week here in Nitro Shots.

A writer for Frontstretch since 2002, and editor since 2006, Toni heads up the NHRA coverage for the site. She’s responsible for post-race coverage in the weekly Pace Laps multi-series round-up along with the weekly Nitro Shots column featuring news and features from the NHRA Mello Yello Drag Racing Series. An award-winning former writer for the Presbyterian Church, Toni works in web design and freelances with writing in North Carolina.
Previous Happiness Is: Packages, Miles & A Finale
Next Kaulig Racing Acquires 6-Race Sponsorship from Phantom Fireworks

Nitro Shots: How Do You Make Championships Exciting? 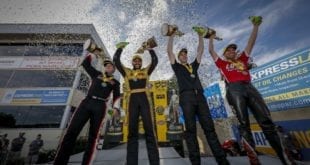