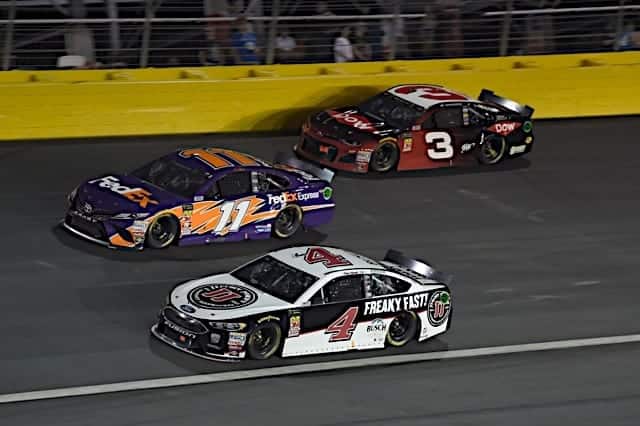 What is the future of the All-Star Race rules package?

As expected either way, there has been a lot of chatter this week about the experimental restrictor plate package used in last weekend’s All-Star Race.

The results have largely been positive among fans. It was generally regarded as the most exciting All-Star Race in years, with a mind-blowing 39 green flag lead changes. The Coca-Cola 600 is over four times the length of the All-Star, and it’s still incredibly improbable that it’ll come anywhere close to that number.

Marcus Smith, president of SMI and the son of Bruton “TV Blackouts Are Good” Smith, pushed hard this past week to use the package in the 600 this Sunday, to no avail. NASCAR was really only making the logical decision. How would it be able to go to teams just a few days before a race and inform them the rules package would be totally different than what they had planned for? And yes, that sounds like something NASCAR would do, but not in recent years.

As far as the future of this package past this week, it’s fair to assume NASCAR will be doing some test races before the playoffs. It did that in 2015 between both what was then known as the high-drag package and the low-drag package, going back to its standard 2015 rules package for the entire playoffs before going the low-drag/low-downforce route in 2016 and beyond.

If the tests are successful (and some prime candidates will probably be Chicagoland Speedway in July and Indianapolis Motor Speedway in September), restrictor plate racing at most big tracks might be here to stay in 2019 and beyond.

Who will qualify first at Monaco?

Formula 1 will begin the best day in racing on Sunday morning with the most prestigous grand prix of the year, Monaco.

As glamorous as Monaco is, it might just be the hardest track in all of racing at which to pass. That puts a major emphasis on qualifying; it’s rare for any passing to happen unless a team fails at pit strategy or if a car has a mechanical problem.

It seemed like Ferrari had the initial leg up on the season. But as of late, Lewis Hamilton has come on strong, winning the last two races at Baku and Catalyna.

As far as Monaco goes, Hamilton and Sebastian Vettel will both be the clear favorites going in. Both have won two Monaco GPs, with them both having wins in the last two iterations of this race. Hamliton has been better this season overall, but Vettel has been a better qualifier, which is the most important factor in winning at Monaco.

It’s rare to see a surprise winner here; this year should be no exception.

How will the Indianapolis 500 go?

The IndyCar Series will take the baton and run 500 miles with it in the biggest open wheel race in America all year long, the Indianapolis 500. This has been one of the more interesting build-ups to a 500 in recent years, with James Hinchcliffe going from a sleeper pick to win to having to watch from atop the pit box. It’s also the final auto race in the career of Danica Patrick.

Even without Hinchcliffe, this is a deep field, with a lot of really competitive drivers and teams.

Hometown hero Ed Carpenter is on a quest to get his first 500 trophy, and he’ll begin the race on the pole. Points leader Josef Newgarden will start right behind Carpenter. Helio Castroneves, the only former champion with multiple Indy wins in the field, will start from the third row with Patrick and Scott Dixon.

Defending champion Takuma Sato will be looking to defend his title and turn the tides of a slow start to his season. Sage Karam has shown speed in practice this week, but he’ll be starting all the way down in row eight.

Patrick is the only big-name guest driver competing in the race this weekend. She hasn’t raced in IndyCar since 2011, and although she has raced exclusively NASCAR the past seven years, her two biggest career highlights came in open wheel. In 2005, Patrick finished fourth in the Indianapolis 500 and put her name on the mainstream map as the highest-finishing woman in Indianapolis history. In 2008, she won a fuel mileage race at Twin Ring Motegi.

She will be ending her career as, currently, the most accomplished woman driver in the history of North America outside of drag racing.

Who will end the day on top in Charlotte?

Sunday night will be the site of the main event of the day, 600 miles at Charlotte. Kyle Busch, somehow, still has not won a points race at Charlotte. He’ll be starting from the pole but will not be the favorite for the week.

No, the best statistical driver the past three years at Charlotte has been the king of the mile-and-a-half, Martin Truex Jr. He has two wins in the past four races at Charlotte, including the most dominating performance in NASCAR history when he led 392 of 400 laps in 2016.

A challenger to Truex’s throne, Kevin Harvick, enters Charlotte white-hot, coming off a win in the All-Star Race and having already won three mile-and-a-half races this year. But due to inspection issues, Harvick will have to start at the rear of the field and more importantly will have to pick his pit stall last.

Austin Dillon is the defending race winner, but with how off the Chevrolets have been this season, he’s probably going to need another big strategy call to have a shot at competing for a win.

Denny Hamlin has had a quiet year so far, but he is currently seventh in points and has posted a career-high in average finish this season. He’s also been successful at Charlotte, with four top-five finishes in the past five races.

Chase Elliott should be Chevrolet’s best hope at winning. He dominated the 2016 fall race at Charlotte before being caught up in a crash, and he just finished second in the 2017 fall race.

Finally, Kurt Busch has shown a lot of consistency here in the past few years and is the 2010 winner of the Coke 600.