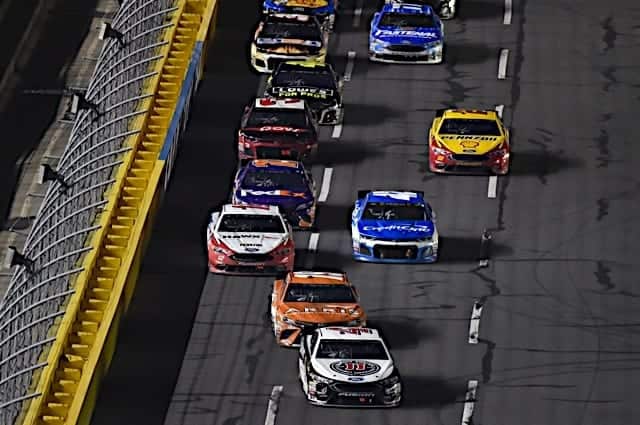 This past weekend’s tweaked aerodynamic package at Charlotte Motor Speedway for the All-Star Race produced some of the best racing we’ve seen this season. Do you think this package should be used again, and if so, when and how often?

Vito Pugliese: The package should be used again, but not until there have been some changes made. Using it at Pocono Raceway in June seems like it would make sense, seeing as it was the result of the XFINITY experiment at Indianapolis a year ago. Given Pocono’s ludicrously long straights, it stands to reason that there should be a larger plate to address the power output. Part of the problem with the package I feel is that fans hear “restrictor plate” and they automatically assume that every event is going to turn into a Talladega or Daytona redux – which is not the case. Michigan makes sense as well, but not until there’s a tire test to get something that wears out quicker and still puts handling at a premium.

Mark Howell: I’m not sure fan enthusiasm should overshadow the NASCAR rule book, but it seems feasible that the XFINITY package from Indianapolis would become standard for tracks between 1.5 and 2.5 miles. We’ve been hearing more yays than nays about the low aero configuration, so it might become the new normal, but not without more attention to whether or not restrictor plates are part of the deal.

Bryan Gable: I would like to see NASCAR test a similar concept again, but I would be hesitant to do it in a points-paying Cup Series race in 2018.  The All-Star race is a great occasion for experimentation, but forcing teams to work with an experimental aero package as we get closer to the postseason is problematic.  A better goal would be to keep refining the aero package from last week and determining races for which it could be used in 2019, possibly without the restrictor plates.  I would love to see how this package works at Michigan, and a variant without the plates would be an interesting test at Indianapolis or Pocono, but not without the proper planning.

Amy Henderson: Yes, absolutely, but not everywhere, at least not right away. Pocono, Michigan and Indianapolis come to mind, but it did work at Charlotte and was interesting in the smaller confines, so maybe a couple of 1.5 milers as well–perhaps five or six races total, and then get feedback from teams and fans before making more changes.  It produced good racing, and I wonder if the naysayers didn’t know it was produced with plates if they’d have the same response.

Despite the package change, Kevin Harvick still won another race, his third in a row and sixth race (five points paying) this season. Will we see a dominant performance from the No. 4 team in Sunday’s Coca-Cola 600 from Charlotte?

Pugliese: I could take the easy way out and say “yes” as that would be the most obvious answer. However, playing the odds along, I’ll stick with the guy who probably should have won Kansas, and damn near lead every lap in the Coke 600 two years ago, Martin Truex Jr. It’s natural to assume that MTJ meeting with DJT this week infused the 78 with some of Kayne West’s Dragon Energy, which may or may not be on NASCAR’s list of banned substances.

Howell: I’m thinking Kevin Harvick and the No. 4 team will be a serious threat to win this year whenever they crank the motor. That said, they have a very legitimate shot at winning the 600 on Sunday. They may not dominate, but they will most likely be the best of the rest.

Gable: There’s no doubt that Harvick is the favorite, and he will likely have one of the fastest cars this weekend.  However, winning the Coca-Cola 600 often comes down to having a fast car and minimizing mistakes.  The speed and accuracy of the No. 4 team’s pit crew has been spotty this year.  If Harvick has a slow stop or a pit penalty at the wrong time, he might not be able to race his way back to the front in the remaining laps.  Whether or not the No. 4 team is its own worst enemy, anyone who hopes to win on Sunday night will have to go through Harvick.

Henderson: Certainly nobody should be surprised if he does. The No. 4 team has done their homework this season and are whipping the competition right now.  Next week someone else could find that edge, but for now Harvick’s a safe bet for a Charlotte celebration.

Speaking of the Coca-Cola 600, being the longest race of the year, there’s no doubt its one of the crown jewels of NASCAR. Rank the top four races in NASCAR.

Pugliese: This one’s a lay-up: Daytona 500, Southern 500, Coca-Cola 600, Brickya…hmm. Talladega? It used to be a Winston Million/No Bull 5 race before. Okay, maybe this is a bit more difficult. Let’s go with the fall race at Martinsville. Need a short track on the list, so why not also the oldest track replete with shrubs, pink hot dogs, trains, grandfather clocks, retaliation wrecks, glowing rotors…you can’t fit all that fun under a pagoda, no matter how tall it is.

Howell: History not withstanding, my Fantastic Four of the Cup schedule are the following:  The Daytona 500, The World 600 at Charlotte, The Southern 500 at Darlington, and the race at Watkins Glen (as sponsors dictate naming rights). The Glen has proven to be some of the best racing we see each year, and the historic layout is worthy of “Crown Jewel” status.

Gable: Number one is the Daytona 500.  The next three are some combination of the Brickyard 400, Coca-Cola 600, and Southern 500.  I probably would have rated the Brickyard as number two a few years ago, but the Southern 500 has experienced a renaissance since NASCAR moved it back to Labor Day weekend in 2015.  To be sure, winning at Darlington Raceway and Indianapolis Motor Speedway is a huge accomplishment for any driver.  But in recent years, the Southern 500 has clawed its way back into the consciousness of NASCAR as a signature event.  This came after a dozen or so years when the folks who ran NASCAR seemed rather indifferent to the Lady in Black.  Meanwhile, racing at Indy was a bigger deal in the late 1990s and 2000s when NASCAR was growing, but the sport has not enjoyed growth like that in 10 years, and the dwindling crowds at the Brickyard have been a prime example of NASCAR’s attendance issues.  I would even say that the Coke 600 has surpassed the Brickyard 400, because the prestige of NASCAR’s marathon race at least relies on stock car racing’s history and associations with Charlotte.  So for me, it is the Daytona 500, Southern 500, Coca-Cola 600, and Brickyard 400 in that order.

Henderson: To me, it’s Daytona 500 (though personally I don’t love superspeedway racing, it is the Great American Race), Southern 500, Coca-Cola 600, Brickyard 400. Those are the races that, as a driver, everyone wants to win.  Those Martinsville clocks are a trophy everyone wants (and I’d take a race at Martinsville over NASCAR at Indy any day), but the Martinsville races themselves aren’t the spectacle of the other four.

The newest NASCAR Hall of Fame class was announced this week. Who’s the one person not in the HOF that you think should be right now?

Pugliese: For a driver, Buddy Baker. First guy to crack off a 200 mph lap (though Bobby Allison maintains otherwise), Daytona 500 winner, fastest Daytona 500 in history (and with the advent of stage racing, that record likely will stand forever), and contributions on the broadcasting end that rival his accomplishments as a driver. On the crew member side of things, Kirk Shelmerdine. Dale Earnhardt won six titles while with RCR, and four of them were with Shelmerdine calling the shots. I know many scream Smokey Yunick from the mountain tops, but as much equity as there is in The Intimidator and his accomplishments, let’s honor the guy who helped get the No. 3 ready to race during the NASCAR’s momentum years of the late 80s and early 90s.

Howell: Buddy Baker. Why he’s not in the Hall of Fame amazes me. His Daytona 500 win in 1980 is still the fastest on record, and he transitioned smoothly from driving into a media role. His talent and personality were larger than life. He should be in the Hall already.

Gable: I hope that some of NASCAR’s early innovators will have their rightful place in the Hall of Fame soon.  Smokey Yunick may have had a rocky relationship with the France family, but Yunick was one of the real giants of his era and it is a shame that he is still absent from the nominee list.  John Holman and Ralph Moody appeared on the ballot for the first time this year.  Considering how the Holman-Moody race team revolutionized NASCAR and launched the careers of several legends, I am surprised it took them so long to get on the list.  Both men would be great additions to the Hall of Fame.  Let’s not forget Ray Fox either.  Given Fox’s lifetime of work as an engine builder, team owner, and NASCAR inspector, it is important that he joins the Hall soon.

Henderson: I think the one on this year’s nomination list who should have gone in was Mike Stefanik.  It’s hard to argue his wins and titles in NASCAR competition–more than Jeff Gordon, actually (though I certainly would not have left Gordon off!).  But I’m more numbers-oriented than many people–I think results speak for themselves and louder than storylines.

The 102nd running of the Indianapolis 500 is this weekend. What are you expecting from the event?

Pugliese: I expect Roger Penske will walk away with his 17th Indianapolis 500 win to bookend his NASCAR Hall of Fame election this week. Who will deliver it? Josef Newgarden.

Howell: I’m expecting good things out of Alexander Rossi. He’s been having a decent 2018 campaign and he knows how to win at The Brickyard. I think it’ll be a fast and memorable race, so long as Danica’s farewell doesn’t steal the show.

Gable: The last two Indianapolis 500s have produced surprising winners.  I don’t remember Alexander Rossi being on anyone’s radar in 2016, and who would have thought that Takuma Sato would snap a four-year winless streak in the biggest race of them all?  I’ll be watching to see if a someone can emerge from the pack to win for a third time in as many years

Henderson:  I expect a much better race than we’ll ever see from NASCAR at Indy.  I’d love to see another surprise winner, but if that’s not in the cards, I still expect to see some fantastic racing.