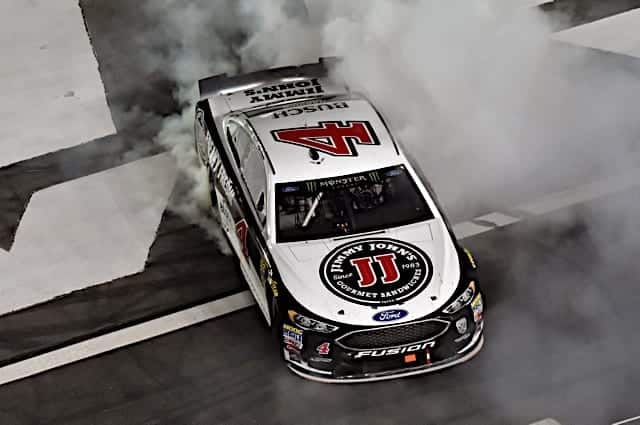 The veteran’s Monster Energy NASCAR Cup Series season pre-All-Star break has been nothing short of spellbinding. Entering this weekend’s Coca-Cola 600 at Charlotte Motor Speedway, he’s won two straight races — three if you count his All-Star Race triumph — and has five wins total in 12 races. The only reason he’s not thought of as the surefire frontrunner for this year’s championship is because Kyle Busch has added three wins of his own. Otherwise, there’d be no contest.

Not only does Harvick’s five wins equal his career best in an entire season (achieved twice before, in 2006 and his championship-winning 2014), it also puts him on pace to join some of the best of the best in NASCAR’s modern era, which began in 1972. That year, the Cup Series schedule was cut significantly to 31 races, and it’s never risen above 36 events since.

Since that year, a total of nine drivers — Harvick now included — have won at least five of the series’ 12 races. Their overall win totals range fairly substantially, topped by the 13-win season Richard Petty rattled off in 1975.

That’s to say that Harvick’s hot start could very well continue, but it does indicate he’s likely to have a heft sum of victories by season’s end.

Why’s this important? Get this: in the last 20 years, only two drivers have scored double-digit win counts in the Cup Series. One of those happened exactly two decades ago: Jeff Gordon’s 13 races in 1998. Then came Jimmie Johnson‘s 10 wins in 2007. Since? Nothing.

That’s kind of crazy, and it may to an extent be a byproduct of the playoffs’ emphasis on winning during both the regular season and the final 10 races, diversifying overall winners lists. Regardless, as viewers of the sport, we should be sort of stoked — this kind of dominance isn’t something that comes along very often, after all!

In all, 16 drivers have won at least 10 races in a season in NASCAR’s modern era. Some of them did so more than once, like Gordon (three), Petty (two), Darrell Waltrip (two), David Pearson (two) and Cale Yarborough (two).

Of those, nine hadn’t even won five races by the 12-race mark of the season, like Harvick has. Shoot, Yarborough’s 1978 season, which saw him score 10 victories, began with just (just!) two wins in the first 12 races. Gordon’s 13-win 1998? Three wins in the first 12. That’s how incredible his summer that year was.

Disclaimer: by all accounts, this was still a very good year for Yarborough. He, uh, won the championship, after all. No one in their right mind is going to sit here and claim it was a bust of a season.

However, for the sake of this column’s hyper-specific argument, he is not part of the mentioned list of 16 drivers. Despite winning six of the first 12 races, Yarborough only visited Victory Lane three more times that 30-race season, ending the year at nine.

Which is still good. Again, not trying to present this almighty hot take that a driver’s championship season in the Cup Series was just ho-hum.

It simply means that Harvick, despite the breakneck pace at which he and the No. 4 team are rattling off victories in 2018, might not actually get to that elusive 10 — or beyond. Everyone might catch up, Harvick himself might fall off in order to test for the playoffs. Who knows? We’re only a third of the way through the season; it’s still early, and plenty of things could happen before November.

But a betting man might be wise to put something on the Cup Series having its first driver with double-digit wins in over a decade. And that’s kind of cool, no matter what.

Who writes the headlines for these articles? An ESL student? Presumably the article was about Harvick’s “quest” for 10 wins. Or did you literally mean Happy is “requesting” that he be allowed to win 10?

When you screw up the headline, the rest of the article is not worth reading.