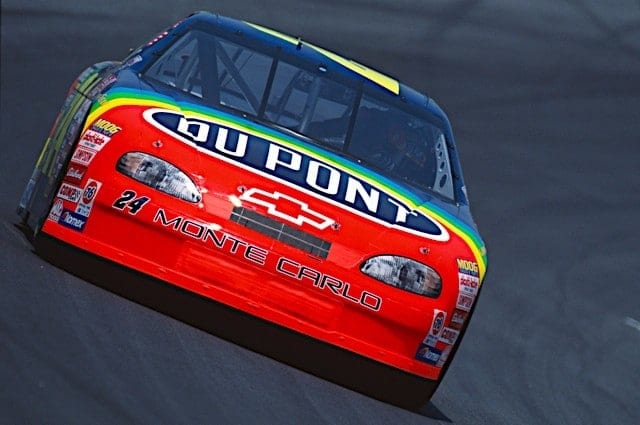 Not all NASCAR Hall of Fame class selections are easy ones. A fan favorite or forgotten pioneer always gets left off, and feelings of resentment result. Many take it as a personal insult and affront if their favorite driver, crew chief or commentator isn’t enshrined in a timely manner.

And to think some say nobody cares about the sport anymore.

For those of us who were around during the meteoric rise of the sport in the late 1980s and early 1990s, this year’s class is unanimous and united in ways that no other group before or since will be. Alan Kulwicki and Davey Allison have long been lobbied for, while Jeff Gordon just became eligible this year. Owners Jack Roush and Roger Penske are still very much active, but even though none of those drivers listed drove for them, they are all somehow linked through the season of 1993 – one that helped shape and change the direction and trajectory of the sport for the next two decades.

Coming off his improbable 1992 championship campaign, Alan Kulwicki was destined to make an indelible impact on the sport he had joined just seven years earlier. He was part of a Midwestern wave of ASA regulars who arrived in the late 1980s in NASCAR, upending what had been a distinctly Southeastern sport. Kulwicki, Rusty Wallace, Mark Martin, Dick Trickle – finally the short trackers of Middle America had representation.

1992 was a roller coaster ride for the No. 7 Underbird. Ford teams were on a roll to start the season, and Kulwicki was part of a contingent of Blue Oval drivers who combined to win the first nine races. A contender throughout the year, he left the fall race at Dover with a 34th-place finish after winning the pole, trailing Bill Elliott by 278 points with five races to go. Heading into the final race there were six drivers with a shot to win the Winston Cup championship. It was Richard Petty’s final race, but the first start for another 2019 Hall of Fame Inductee, Jeff Gordon.

Going into the race, Davey Allison, the points leader, was the odds-on favorite to win the championship. Having endured his own injuries and brushes with mortality on two occasions that season, whoever the winner would end up being , they would be justified walked away with the championship.

The events of that day are now a thing of motorsports lore. Allison suffered damage in a lap 1 incident, battled back into contention, only to be caught up in an accident – ironically – by the driver who would be called upon to fill his seat less than a year later. Kulwicki would lead one more lap than race winner Bill Elliott and became the first owner/driver to win a championship since Richard Petty in 1979.

Heading into 1993, these three drivers, as well as the two owners, would all play pivotal roles throughout that season.

The 1993 Daytona 500 started off with Kulwicki defending his title, while Davey Allison was returning as the champion of the Great American Race. The Twin 125 qualifying races held on Thursday before the race saw rookie Gordon win in his first attempt to qualify for 500;,a harbinger of things to come for the open wheel ace. Kulwicki and Allison would start alongside each other in 10th and 11th but had unremarkable results, finishing 26th and 28th, respectively.

In the sixth race of the season at Darlington Raceway, Kulwicki would lead for two laps – only the second time that season – en route to a sixth-place finish, behind former fellow ASA competitor and Penske Pontiac driver Rusty Wallace. Four days later en route to Bristol Motor Speedway following a sponsor appearance for Hooter’s, Kulwicki and three others were killed in a plane crash in Sullivan County, Tenn. Wallace received word a few hours after the incident. Friday morning, the team exited the track. The sight of the No. 7 hauler, clad with a memorial wreath on its grille, making a final lap around the rain soaked speedway before exiting, remains one of the most chilling and iconic scenes in NASCAR history.

The race ran as scheduled on Sunday, however, and was won by Wallace. Wallace dedicated the win to his fallen friend, lapping the half-mile track in the opposite direction in honor of Kulwicki’s self-described Polish Victory Lap.

It was one he only made on two occasions – his first win at ISM Raceway in 1988 and his championship at Atlanta Motor Speedway in 1992. Davey Allison came home in fifth that day – his second top five of a season that was just starting to gain momentum.

As the 1993 season rolled on, one thing was apparent: The Penske-owned Pontiac of Rusty Wallace was not to be trifled with. The Captain’s Ponchos were in command for most of the year, winning 10 races and nearly edging out Chevrolet for the manufacturer’s title almost single-handedly. Unbeknownst to a certain General Motors-sponsored team at the time, the Penske team actually had a larger share of GM financial support that season.

The fifth win of 1993 for the Penske No. 2 team was at the inaugural 300-lap race at New Hampshire Motor Speedway. Wallace took the lead from Allison with 30 laps to go, holding off the Roush Racing Ford of Mark Martin. Allison would finish third, the final race of his career. As he would throughout the season, Wallace whipped the No. 2 Miller Genuine Draft Grand Prix around and saluted Kulwicki and the crowd with a Polish Victory lap.

Allison was piloting a helicopter, landing at Talladega Super Speedway with family friend and driver Red Farmer, to watch fellow Alabama Gang member Neil Bonnett test a car with his son David for his upcoming Busch Series debut. Hovering a few feet off the ground, the machine suddenly shot up and stalled, falling back on its tail. The rotors clipping the ground, pitched the helicopter over, slamming pilotside first onto the asphalt parking lot.

Initial investigations cited pilot error and inexperience; however a lawsuit and eyewitness accounts point to a failed collective yoke that caused the craft to inexplicably go out of control.

While Bonnett was able to extricate Farmer from the wreckage, Allison could not be freed until first responders arrived. He never regained consciousness and passed away the following day.

That weekend, the Cup Series was racing at Pocono Racaeway. Dale Earnhardt won the race, edging out Wallace by less than a second. Earnhardt stopped his car at the finish line, saying a prayer with his team for his fallen friends. Earnhardt followed Wallace’s lead with a Polish Victory Lap while holding a No. 28 Texaco Havoline flag as he drove around acknowledging the crowd and a fallen competitor who was destined to have been a dominant force with Earnhardt through the decade – but was not to be.

The other two principals of this year’s Hall of Fame class were a story are intertwined as well. Jeff Gordon went on to win Rookie of the Year honors in 1993, tearing the front clip off of 13 cars in the process. Gordon’s NASCAR career started driving the No. 1 Fords of Bill Davis, a close friend and early racing partner of Roush cornerstone Mark Martin from their formative years racing around Batesville, Ark.

Ford was planning on pairing Gordon with one of its prominent Ford teams, namely Roush Racing, for 1992. A disagreement over crew chief pairings led Gordon’s manager and stepfather to hang up on Roush not once but twice.

In 1993, Jack Roush’s No. 6 Ford driven by Martin caught fire mid-summer, winning four races in a row, which still stands as the modern record for consecutive victories in the modern era. The No. 60 XFINITY team, which became an iconic number in NASCAR’s second-tier series,  was purchased that season from Martin, and the results did not disappoint. Seven wins in 14 starts, including five in a row it showed up to.

Roush Racing was now a force in both of NASCAR’s premier touring series – and would be in five short years once the Camping World Truck Series became a full-time affair as well.

What is quite eerie is that Jack Roush’s fate nearly followed the same path as both Kulwicki and Allison.

Had it not been for former Marine Rescue Diver Sgt. Maj. Larry Hicks, who just happened to be on the same lake that Roush crashed an experimental airplane into on his birthday in 2002, he would not have been on hand in Charlotte Wednesday to receive this honor. Nearly decapitated by power lines, his plane had the wings ripped off, crashing into lake. He was drowned and turning shades of blue when Hicks rescued him from a mixture of black water and aviation fuel. While unable to speak in a hospital bed following the incident, he was visited by Martin, who relayed to him that he might have brain damage.

Roush responded by writing on a piece of paper in his deadpan humor, “That sounds like it could be bad.”

He came perilously close a second time in 2010, when he crashed while attending the Oshkosh Air Show in Wisconsin. That crash left him with a number of fractures as well as the loss of his left eye.

While everyone elected to the NASCAR Hall of Fame is certainly deserving, the 2019 class is different for a number of reasons. You’d be hard-pressed to build a persuasive argument against anyone who was elected this year. There are obviously other nominees who are equally deserving and will no doubt enter in due time.

This year’s class, through whatever strange confluence of events, cosmic coincidence or divine providence, is a meant-to-be story that started 25 years ago, and whose concluding chapter was written this past Wednesday evening.