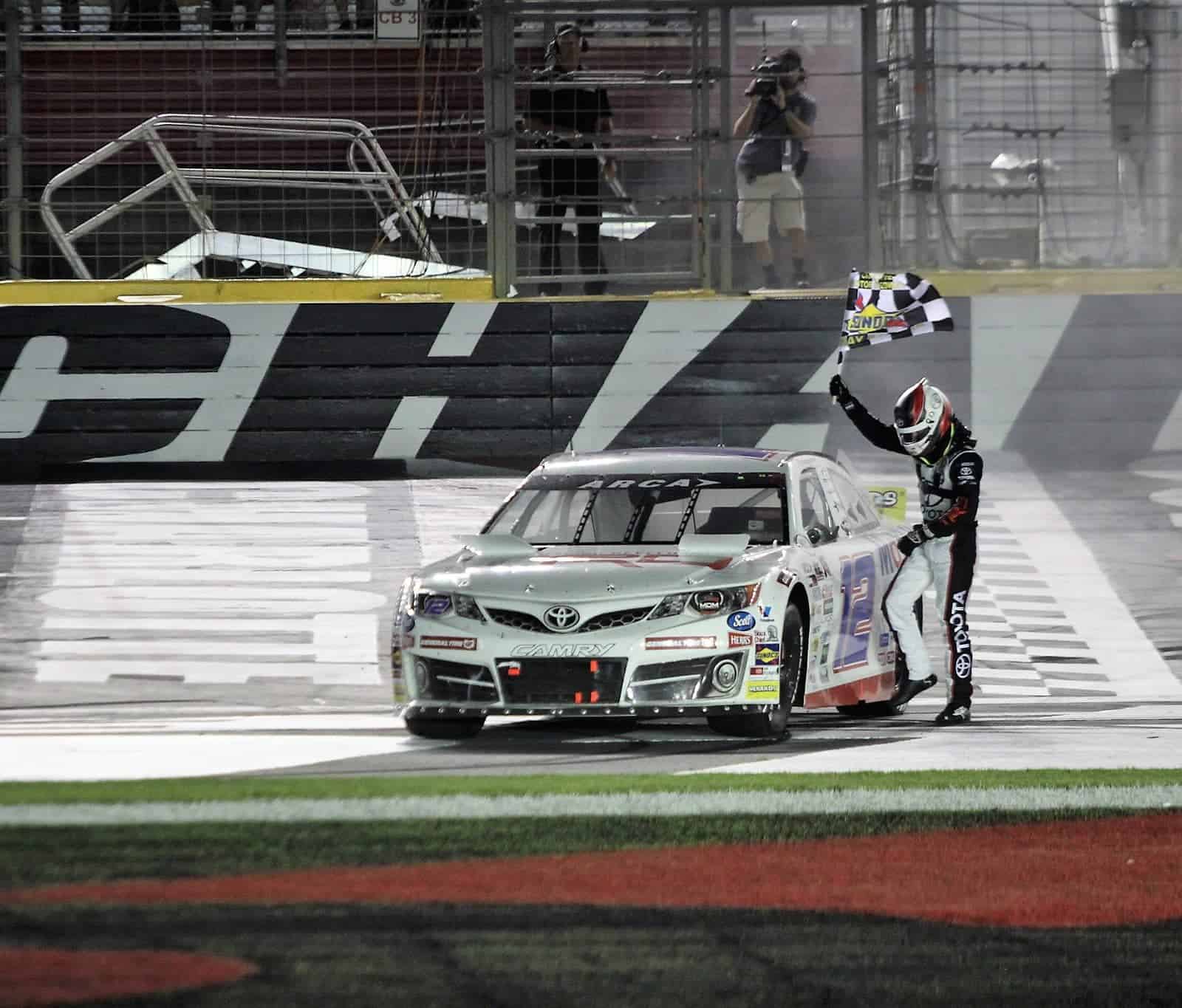 Jones led from the final restart of the race with seven laps to go, driving off from Sheldon Creed and polesitter Todd Gilliland, who led the first 50+ laps of Thursday’s race.  Creed finished third, followed by Gilliland and Zane Smith.

The fifth-place effort was Smith’s fifth top-five result in a row, allowing him to maintain a narrow points lead over teammate Creed, as ARCA embarks on its summer stretch run. The race was the first ARCA event run on an intermediate oval in 2018.

Thursday’s race marks the first of three consecutive events ARCA will contest on superspeedways contested by the Monster Energy NASCAR Cup Series, and if this one was any indication, such a slate is exactly what Riley Herbst and Cup Series veteran crew chief Bootie Barker need to hit their stride.

After a rocky start to 2018 and a poor qualifying run, Herbst moved forward over all 100 laps Thursday night, with the No. 18 car finishing only a few car lengths behind race winner Jones. ARCA’s next race is at Pocono Raceway, where Herbst won his first career race a season ago, followed by Michigan, both of which are tracks where Barker has extensive experience as a crew chief. If MDM’s teams slip at all the next two weeks, this team sits poised to strike.

Speaking of MDM Motorsports, while their fourth car brought home a trophy with Brandon Jones, their regular teams enjoyed a strong start to the intermediate slate of the ARCA schedule. Sheldon Creed finished third and contended for the win late, recovering from late-race contact with Herbst to challenge three-wide on the final restart with seven laps to go before a loose condition caused him to lose contact with race leader Jones.

Last week’s winner and points leader Zane Smith continued his strong start to 2018 with a fifth-place finish. The only blemish on their evening came in the form of Chase Purdy, who saw a top five run slip from his fingers late when he spun out going three-wide with Creed and Herbst inside of 15 laps to go. The No. 8 car ended up backing into the wall.

Quin Houff’s first-ever ARCA race on an intermediate oval resulted in a sixth-place finish, a career-best for a driver whose average career finish was 30th entering Thursday night and equaling the season best for Mason Mitchell Motorsports.

K&N West Series regular Will Rodgers finished eighth in the No. 11 Ford, a career-best for the California-native and the best finish of the season for Andy Hillenburg’s race team.

Brandon Lynn finished 10th in his first intermediate track race since 2015, finishing tops in the Venturini stables. Having said that…

Venturini Motorsports’ big gun for Thursday’s race went off before the green flag, with Michael Self enduring a hard wreck in qualifying that forced him to a backup car. Since the wreck happened in qualifying and left the team no time to practice or prep the backup, Self went down a lap early and never recovered, finishing outside the top 20. Leilani Munter was woefully off the pace for the entirety of the Charlotte race in finishing 20th. And that leaves full-time competitor Natalie Decker, who was involved in an on-track incident for the fourth consecutive race, running into the back of Bryan Dauzat’s No. 57 on lap 21. Though replays showed Dauzat did struggle to get back to the throttle in turn 4 after passing Decker, there’s little question that Decker could have avoided contact with the No. 57. Decker finished 15th.

Dauzat came off the worst in that incident, with his No. 57 suffering heavy front end damage following the wreck. Dauzat did not finish the race.

Jesse Iwuji has struggled with pace in all of his ARCA starts so far in 2018, but Thursday marked the first race where those struggles turned into a wreck of his own making. Iwuji appeared to suffer a mechanical issue in turn 2 on lap 37, and ended up making heavy contact with both the No. 22 of Tyler Dippel and the outside wall. Between ARCA and the K&N East Series, Iwuji has finished only one of five starts this year.

Any momentum Joe Graf Jr. had following strong finishes at Talladega and Toledo went out the window in Charlotte, where the No. 77 hit everything short of the pace car (but including the orange cone). Graf’s race nearly ended in the first corner of the first lap, where he lost a top five starting position when spinning onto the apron. Though he did gather up the car without incident, it wasn’t long before Graf found himself an innocent victim on lap 21 when he scrubbed the fence after getting caught up in the Decker/Dauzat wreck. Graf later spun on his own exiting turn 4 and finished a pedestrian 18th. Between Graf’s struggles and Tyler Dippel failing to finish after his wreck with Jesse Iwuji, Chad Bryant Racing endured a harsh return to Charlotte.