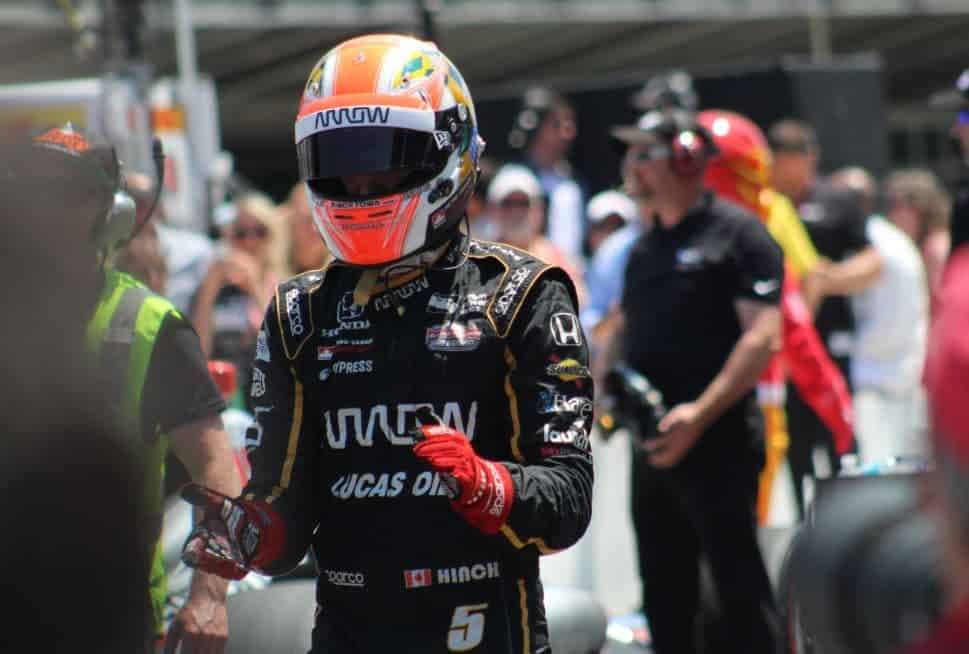 The next time Indy cars are on-track, it will be the day of the 102nd Indianapolis 500. Final practice and the pit stop competition transpired on Friday, also known as Carb Day. Here are three notable events that occurred:

During the final practice session, Danica Patrick completed six laps and then pulled into pit road. Her crew took the rear engine cover off her No. 13 Ed Carpenter Racing Chevrolet to inspect the motor before taking it behind the wall.

The team worked on the car for a few minutes and fixed whatever issue the bright green machine had. She was able to run a few more laps before the session ended at noon. Patrick reported that the car felt like it was low on power despite finishing eighth on the time chart.

“Had it been Sunday, we’d be done,” Patrick told NBCSN regarding the issue. But it seems the engine scare was just a brief snafu, and the car will be OK for Sunday.

She’ll start the final auto race of her career from seventh. Her best finish in the 500 is third, which occurred in 2009.

James Hinchcliffe’s failure to qualify for the Indy 500 will likely be the most shocking thing to happen all season. But he’s still at Indianapolis Motor Speedway participating in media events and supporting his Schmidt Peterson Motorsports teammates.

Hinchcliffe has been praised for his sportsmanship since Bump Day. It’d be easy to have a sour attitude throughout the week leading up to the 500, but he’s made the best of a bad situation. His No. 5 Honda was on-track for the pit stop competition, which he nearly won.

Hinchcliffe and his crew beat teammate Robert Wickens in the semi-finals to advance to the final round against Chip Ganassi Racing’s Scott Dixon. Dixon won two-out-of-three to claim the pit stop competition victory, but the event gave Hinchcliffe’s fans something to cheer about.

“I walked into the garage this morning, and I thought it was the grandstand because we had 400 people in there, and everybody is eating ice cream and hot dogs, and that’s AJ,” Kanaan said. “Everybody is an AJ fan here. … I said, ‘AJ, you have a lot of friends here.’ It’s completely different, and it’s fun. It’s busy at times, but I’m having a blast.”

Kanaan also noted that slickness of the track surface. The temperature was close to the 90s, and the amount of grip — along with the new universal aero package — has made the cars more challenging to drive.

“It’s concerning, but there’s not a lot to think because none of us run at that type of heat,” he said. “If it’s going to be 90, we haven’t had a single day here this month that we ran, so it’s going to be really like… I think if you talk to every driver, everybody is concerned because we’re going to have to be doing a lot more work with your tools in the car.

“Every stop we’ll be making a change here. And in the middle of the race you’re going to think I’m awesome, and then it’s going to get three degrees hotter, and you’re going to go, where did that car go. Even this morning was the same thing; we went through that exercise, and the car was OK in the beginning, it was OK in the middle, and at the end, the temperature started to get hotter, and it was a completely different car, and we haven’t done anything.”

Here is the full list of final practice results