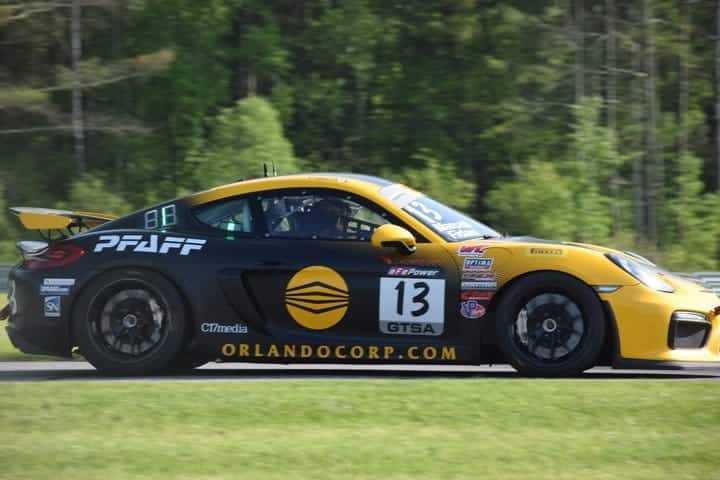 The Am class was led by Mühlner Motorsports America’s Moritz Kranz in the No. 21 Porsche Cayman GT4 Clubsport MR.  Kranz’s best lap was 55.051 seconds (96.391 mph), just eight-thousandths of a second slower than Marcelli and good for second overall.

Kranz’s lap was three-tenths of a second faster than MarcoPolo Motorsports’ Nicolai Elghanayan in the sole KTM X-Bow GT4 in the field.  Running both GTS SprintX and the TC class appeared to give Elghanayan some extra pace simply because of the extra track time.

The session was halted approximately halfway through due to a crash for Racers Edge Motorsports’ Harry Gottsacker in Turn 4.  Gottsacker’s SIN R1 GT4 appeared to lose his left front wheel before going off at Turn 4 and nosing into the tire barrier.  Gottsacker was ok, but the SIN R1 was hurt significantly.  For causing the red flag, Gottsacker lost his fastest lap of the session and ended 29th quickest.

A number of notables were further down the order on Friday.  Am points leader Aurora Straus and her teammate Jon Miller were 14th quickest.  Blackdog Speed Shop’s Lawson Aschenbach and Andy Pilgrim were mired down in 18th.  Compass Racing’s Ray Mason and Paul Holton were 19th, while Robinson Racing’s Shane Lewis and Gar Robinson were 25th.