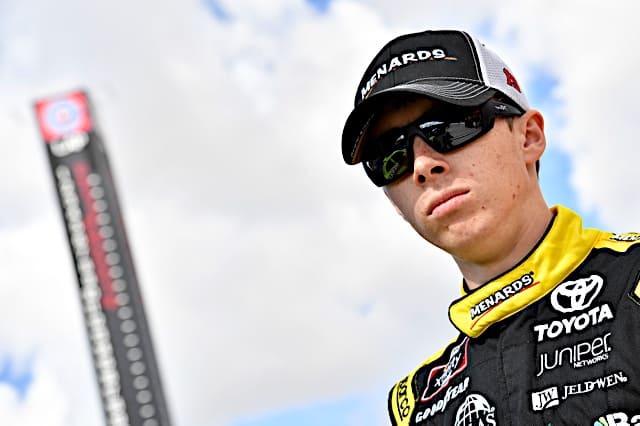 Brandon Jones entered the Alsco 300 with a fresh whirl of confidence, and he almost delivered on it before settling for a 15th-place finish.

Jones started the race in fifth position and had blazing fast speed. With the exception of Monster Energy NASCAR Cup Series drivers Kyle Busch and Brad Keselowski, Jones was the fastest car on the track at one point. He finished the first stage in second, behind Busch.

The No. 19 Toyota lost a little speed in the second stage, but still finished third in the 45-lap segment. Due to Busch not being eligible for NXS points, Jones scored more stage points than any other driver.

“The first two stages were really good,” Jones said. “We ran very consistently up front in those stage, got some stage points.”

Jones fell off more and more as the race went on, and after a lengthy rain delay, Jones did not have the same speed he had earlier. A large part in the late race struggles was a loose wheel.

“It sat here under the rain delay some, and I think the wheel was already beginning to become loose,” Jones said.

Through the final three green flag runs after the delay, Jones lost positions on each restart while trying to nurse his car around the track. On one of the restarts, Jones said he anticipated the start a little too soon and had to check up.

“That allowed everybody to rush us and get around us,” Jones said.

Jones eventually had to pit to take care of the tire problem and he only able to recover to the 15th position.

“It’s tough to not execute the way we should have at the end, but all in all a pretty good day,” Jones said. “This whole week has been phenomenal.”

Jones said that his first win is close, but “I don’t want to jump into it too soon and say we’re already there needing to win a race, but at the same time, we’re doing a lot of work right now to make sure we’re able to win a race.”