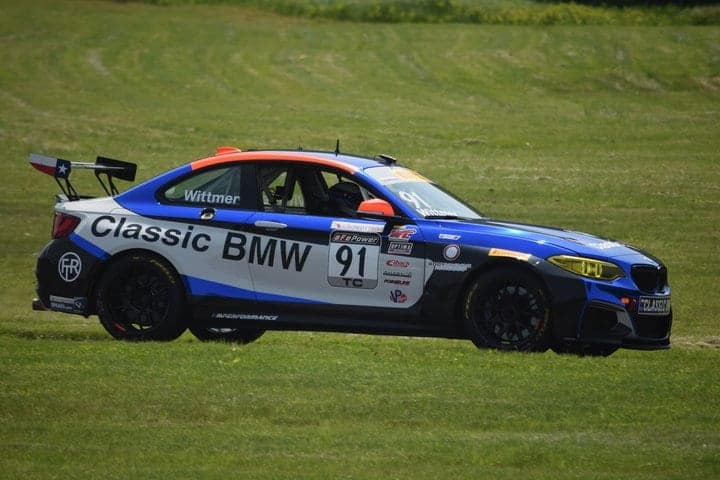 In qualifying, BERG Racing’s John Weisberg originally won the pole in his Mazda MX-5 TC Spec.  However, Weisberg was DQ’d in post-qualifying inspection for a technical infraction.  As a result, Wittmer ascended to the pole with a lap of 57.164 seconds (92.828 mph).

Wittmer’s teammate Matt Travis qualified second, just four-hundredths of a second back.  Unfortunately, Travis went wide in the Climbing Turn while trying to improve his time and clipped the tire barrier with a couple of minutes remaining.  Travis’ stricken BMW topped on the grass just before the West Turn and stayed there under a local yellow for the remainder of the session.

For Wittmer, he’s likely looking for some redemption at Lime Rock.  Last year, Race No. 1. ended in a somewhat unusual place for the Canadian racer.

In the morning practice session, Wittmer was once again fastest with a lap of 57.664 seconds (92.023 mph).  Wittmer’s time, which was set early in the session, was nearly one-third of a second quicker than Nimkoff.

Johan Schwartz in the Rooster Hall Racing BMW was third quickest, just seven-thousandths of a second slower than Nimkoff.  Travis and Weisberg rounded out the top five.

Wittmer actually sat out the second practice session Friday afternoon.  That allowed Nimkoff to top the charts with a lap of 57.623 seconds (92.088 seconds).  The time was nearly three-tenths of a second faster than Travis.  Kozarov was third fastest, followed by Weisberg and Ricca.

The session ended a couple of minutes early after Steve Bottom crashed his Nissan 370Z in the Diving Turn.  When asked about the incident, Bottom was honest.

“I tried to go through the [Diving Turn] flat, and ran out of talent,” Bottom told Frontstretch after the crash.  “I just went wide, got out in the marbles and off I went.”

Bottom’s Nissan had damage to the left front corner.  The damage really wasn’t all that bad, but Bottom doesn’t have a lot of spare parts.  He skipped qualifying on Friday, but will race Saturday afternoon.