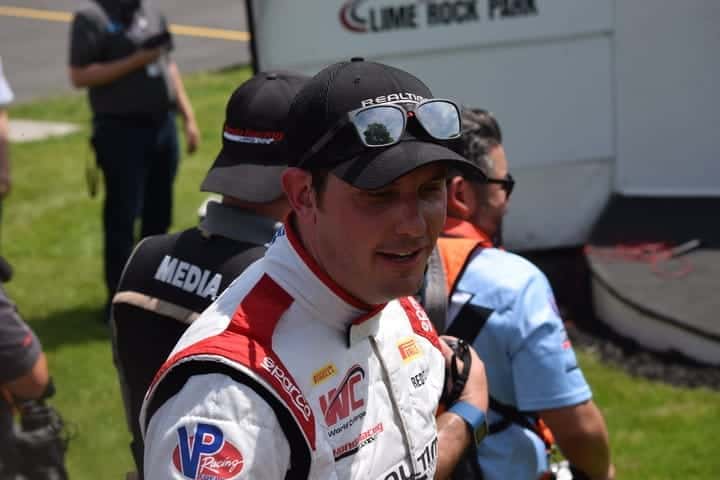 RealTime Racing’s Ryan Eversley took advantage of his pole position to stake himself an early lead over the pack.  It was ultimately more than enough for Eversley to hold on for his second win of the season.

“We have a really kick-ass Honda Civic Type-R,” Eversley said after the race.  “That thing was so good.  JAS Motorsports, who builds the car in Italy and runs it in the [World Touring Car Cup].  They sent us an engineer named Nicola who had several ideas on setup that we hadn’t even considered.  Immediately, the car got better.  We went from pretty good in the first session to really good.”

As has been the case for much of the season, the Hyundai i30 N TCRs of Mark Wilkins and Michael Lewis were right there with Eversley.  Together the three drivers pulled away from the rest of the pack and hid.

The race got off to a relatively slow start when Compass Racing’s JT Coupal and Eversley’s teammate Adam Merzon collided in the Climbing Turn.  Both drivers spun, but Coupal hit the tire barrier and could not restart, drawing an early yellow.

After the restart, Eversley was able to pull out a gap by himself.  Meanwhile, Lewis and Wilkins fought among themselves.  While doing that, Lewis set the fastest lap of the race with a time of 54.279 seconds (97.762 mph).  That gave him the pole for Race No. 2.

The second and final full course yellow came out with six minutes to go when Kenny Murillo went off exiting Turn 4 and hit the tires hard in his Mazda.

Here's a shot of Kenny Murillo's crashed No. 24 Mazda Global MX-5 Cup car from the earlier TCR/TCA race. He's been taken off for a check-up. pic.twitter.com/10xmMj1k2o

The hit was quite massive and onlookers in the vicinity noted that the car got airborne after hitting the tires.  Murillo could not get out of the car on the drivers’ side because the door was stuck closed.  As a result, he had to exit on the passenger side.  He was transported to a local hospital for a check-up, but is likely to be just fine.  The crash caused the race to finish under yellow.

Wilkins ended up second at the finish, followed by Lewis.  Michael Hurczyn was fourth in his Volkswagen, followed by Mason Filippi in another Volkswagen.

In TCA, Murillo told Frontstretch before the race that the key to his race was to keep the front tires under him and hold off Tom O’Gorman’s Honda.  That didn’t come to pass.

Powell was able to get past Murillo and went to work on O’Gorman.  A move to the outside at Big Bend allowed Powell to briefly take the lead before O’Gorman could take it back.  A few laps later, Powell was able to make it stick for the lead.

Murillo was able to follow Powell past into second and was not too far behind Powell when he went wide exiting Turn 4.  That led to his aforementioned crash that ended the race.

Powell was happy after the race, but concerned about Murillo.

“Glad to get the win.  First, I hope Kenny Murillo’s ok.  It looked like a pretty nasty [wreck],” Powell told Frontstretch after the race.  “The feeling [of winning] is amazing; It never gets old.  We had a great fight in the beginning that was a lot of fun.  A lot of tense moments with TCR cars coming through, but I think I managed that a little better today and that was the difference.”

After Murillo’s crash, O’Gorman inherited a second-place finish (14th overall) in his Honda.  Jeff Sexton was third in his Subaru, followed by Travis Washay in his Volkswagen.  Spencer Patterson was fifth.

Before he had his big crash, Murillo set the fastest TCA lap of the race in his Mazda.  That would give him the TCA pole for Race No. 2, but the car was too heavily damaged to continue.