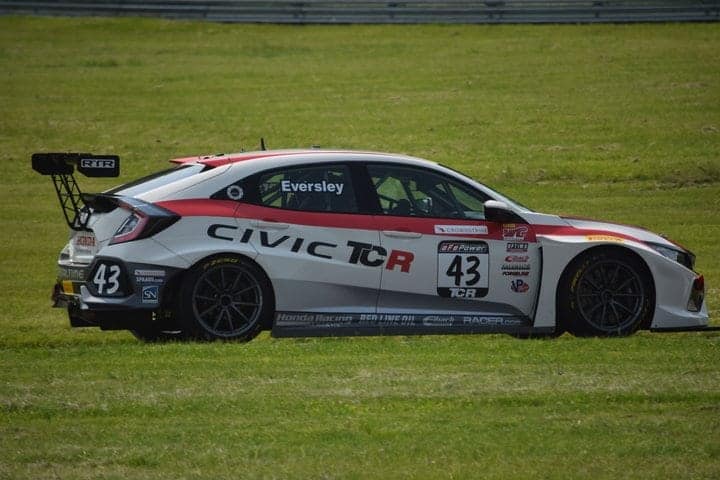 RealTime Racing’s Ryan Eversley seemed vincible in the opening practice session Friday morning (May 25) at Lime Rock Park.  After adjustments, no one could touch his pace.  The Atlanta-based Eversley was fastest overall in practice and easily won the pole for Saturday’s first TCR/TCA race.

The qualifying session was not really all that close.  Eversley claimed the overall pole with a time of 53.429 seconds (99.317 mph), a time that took only three laps in the 20-minute session to accomplish.  Let’s just say that Eversley is very confident going into Saturday.

Eversley’s lap was nearly four-tenths of a second faster than Bryan Herta Autosport’s Mark Wilkins in the fastest of the Hyundai i30 N TCRs.  Michael Lewis will start third, followed by the Volkswagens of Mason Filippi and Michael Hurczyn.

In TCA, it was Murillo Racing’s Kenny Murillo who claimed the class pole with a lap of 58.761 seconds (90.305 mph), good enough for 15th overall.  Murillo was one-eighth of a second faster than the Honda of Tom O’Gorman.  TechSport Racing Subaru teammates Eric Powell and Jeff Sexton will start third and fourth, while Indian Summer Racing’s Travis Washay will start fifth in his Volkswagen.

In opening practice on Friday, Eversley was fast early in his Honda Civic Type-R TCR and topped the chart for most of the session.  In the final 10 minutes, Lewis was able to put his Bryan Herta Autosport Hyundai on top with a lap of 54.522 seconds (97.326 mph).  The lap was a quarter of a second faster than Eversley and a full half a second faster than Wilkins.  Hurczyn was the fastest Volkswagen in fourth, followed by JT Coupal in the Compass Racing Audi RS3 LMS Club Sport.

TCA saw Powell top the chart with a lap of 59.422 seconds (89.300 mph) in his Subaru BRZ tS.  The lap was four-tenths of a second faster than O’Gorman in the TOMO Racing Honda.  Murillo was third quickest, followed by Jose DaSilva and Washay.

In the afternoon session, changes made to Eversley’s car brought the Honda Civic Type-R TCR to life.  He topped the session with a lap of 54.201 seconds (97.902 mph), a full three-quarters of a second faster than Lewis.  Wilkins was third quickest, followed by Adam Merzon in the second Civic Type-R TCR.  Hurczyn was fifth, more than 1.3 seconds back.

TCA saw Murillo top the chart with a lap of 59.675 seconds (88.922 mph), good enough for 14th overall and the only TCA car under one minute.  Murillo was nearly a full second faster than O’Gorman in second.  Washay was third quickest, followed by DaSilva and Moisey Uretsky.

The session had one red flag period when Anthony Geraci went off in his Audi RS3 LMS Club Sport and stalled in the grass.  The car was not hurt significantly.

Both TCR/TCA races are scheduled to be run Saturday at Lime Rock Park.  Race No. 1 is scheduled for 10:50 a.m. ET and will be streamed live at World-Challenge.com.