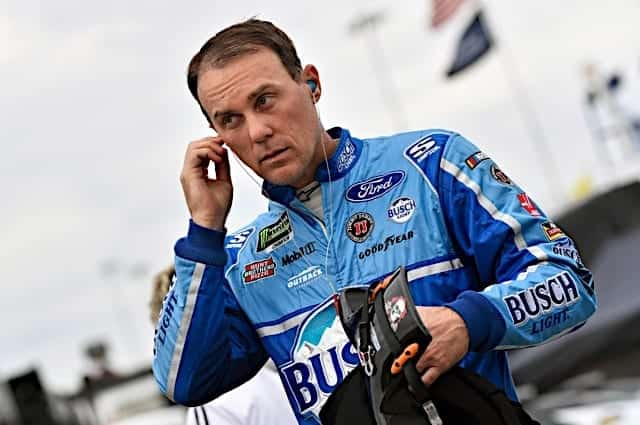 Heading into the Coca-Cola 600 at Charlotte Motor Speedway, Kevin Harvick was the guy to beat.

Harvick was “freaky fast” in Sunday night’s (May 27) race as well. After missing qualifying due to failing the pre-qualifying inspection, Harvick started the race in last place, but with a car as fast as he has had, it was only a slight setback.

The No. 4 showed that dominant speed through the beginning of the race — it only took him 45 laps to get to sixth place. Harvick had moved up as high as the fourth position when tragedy struck.

On lap 83, Harvick’s left front tire blew, and his Ford sailed off into the outside wall. Harvick’s crew chief Rodney Childers immediately called Harvick to pull it into the garage, and the team’s day was done. The wreck happened just 17 laps prior to stage 1’s end.

“The guys did a great job, and we definitely had a great car,” Harvick said. “Just driving to the lead there and just wound up having a tire go down, no warning.”

Harvick was evaluated and released from the Infield Care Center. The DNF was Harvick’s second of the year and it marked the third time this season he has finished off of the lead lap.

Michael Massie is a writer for Frontstretch. Massie, a Richmond, Va. native, has been a NASCAR superfan since childhood, when he frequented races at Richmond International Raceway. Massie is a lover of short track racing and travels around to the ones in his region. Outside of motorsports, the Virginia Tech grad can be seen cheering on his beloved Hokies.
@m_massie22
Previous Hélio Castroneves Wrecks in Supposedly ‘Final’ Indy 500
Next Daniel Ricciardo Wins Maiden Monaco Grand Prix