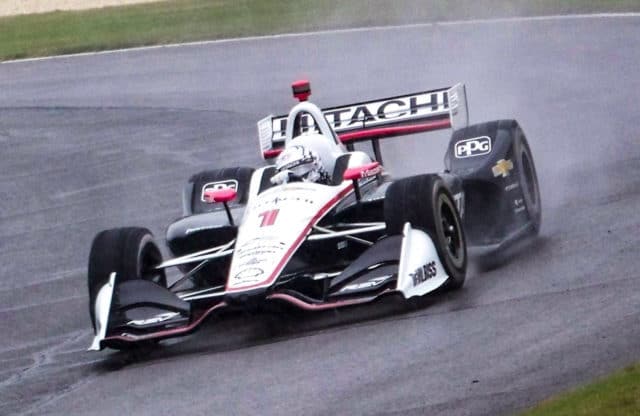 Our INDYCAR contributors sat down and discussed different things about today’s Indianapolis 500. John Haverlin and Christian Koelle talked about who was some drivers who were surprises the last few weeks, rookies winning and ultimately their prediction for the winner.

Here is a discussion From the Paddock.

From the Paddock: Indianapolis 500 Edition

Q – Who are a few drivers that you feel could stand out on Sunday and possibly pull off a victory?

John Haverlin – Spencer Pigot, Sage Karam, and Carlos Munoz are drivers to watch on Sunday. Pigot, driving for Ed Carpenter Racing, has been in the shadow of his teammates throughout May. Carpenter won the pole, and Danica Patrick is concluding her storied career in this year’s 500. But Pigot qualified sixth. All three ECR entries made it to the Fast Nine, and there’s no reason to think any of them can’t contend for the win.

Karam was fastest in practice under race-like conditions on Monday, so his Dreyer & Reinbold Racing team might have something up its sleeve. The team is fielding a second entry for JR Hildebrand this year, but both drivers have their work cut out for them on Sunday as they qualified in the mid-twenties. Karam has run the 500 four times and has finished 28th or worse twice, so I believe he’s bound to have a strong running eventually.

Munoz has finished second in the 500 twice. This is his only event of the 2018 IndyCar Series season, so he needs to make the most of it. He’ll drive the No. 29 Andretti Autosport Honda, which Formula One’s Fernando Alonso raced last year. Most would agree Munoz has the natural ability at the 2.5-mile oval, but he’ll have to work his way up from 21st when the green flag waves.

Christian Koelle – Everyone has a shot to win in my opinion. Any amount of circumstances could face today’s race and set up a truly magical finish. I have been really impressed with Gabby Chaves and his team this weekend so I definitely don’t think you can overlook them. Team Penske has also been very strong this year especially Josef Newgarden, so I could see him also pulling the victory off.

Q – Out of the four rookies racing in this year’s Indy 500 (Matheus, Wickens, Clamen De Melo, Kaiser), who do you think could join Alexander Rossi as Rookie winners in the 500?

Haverlin – Robert Wickens definitely has the best chance to win the 500 as a rookie. Wickens has been phenomenal. He could have won St. Petersburg, Phoenix, and the IndyCar Grand Prix, and it seems like he might be a championship contender. Of the four rookies, Wickens is with the best organization, Schmidt Peterson Motorsports, so he’ll have the best shot at victory.

Koelle – I agree with John on Robert Wickens. I had the chance to speak with Wickens following the Barber race last month, and he seems very humble and has the talent to back that up. Wickens is also carrying the flag for Schmidt Peterson Motorsports since James Hinchcliffe failed to qualify, which I feel really gives him the opportunity to step up and be the face of the organization.

Q – What have been some surprises so far since practice began two weeks ago?

Haverlin – The biggest surprises have been Danica Patrick and James Hinchcliffe. Obviously, Hinchcliffe’s failure to qualify has been a story within itself, but Patrick has been refreshingly quick the last few weeks. This is her first IndyCar event since 2011, so nobody knew what to expect from her. But her ability to compete for the pole on Sunday demonstrated that she’s in a fast car, and she’ll want to end her career with a bang.

Koelle – Hinchcliffe is definitely the biggest surprise even with him not buying a ride. He’s going to miss out on a ton of points which sucks for him being as now he’s basically out of the championship picture. Other than that, Chaves has been incredibly fast this weekend and following his run-in with Simon Pagenaud at Barber he’s got a lot to prove especially going up against a former champion.

Haverlin – Will Power will win his first Indy 500. He’s starting in the middle of the front row and this year, and the 2014 series champion will drink the milk. Team Penske has been sharp not only here at Indy but since the start of the year.

Koelle – Josef Newgarden will win his first Indy 500. The American sensation, who is becoming one of the hottest IndyCar drivers on the circuit. I agree with John on the fact that Team Penske has been sharp this season and Newgarden won last month at Barber so he’s got that momentum to carry over into this race.