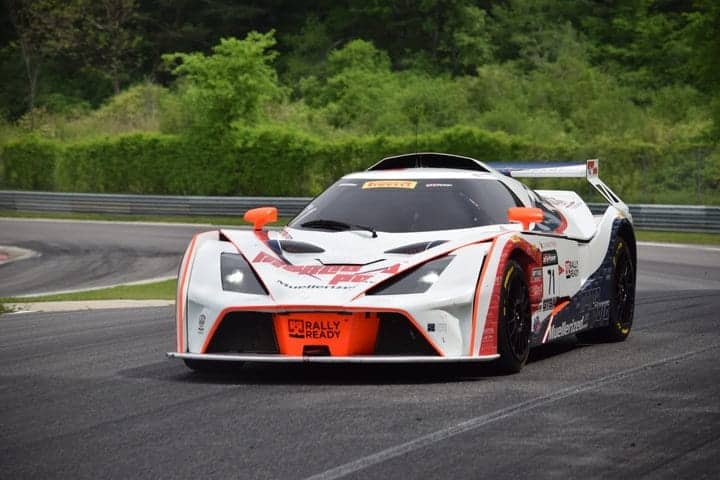 Saturday’s qualifying session for Monday’s GTS SprintX Race No. 1 at Lime Rock Park was full of surprises.  However, literally no one expected Laguna Beach, Calif.’s Nicolai Elghanayan to claim the overall pole in his Am-class KTM X-Bow GT4.  That includes Elghanayan when he was asked if he expected to be as fast as he was.

“No, not really.  This is my first time here,” Elghanayan told Frontstretch in the paddock.  “I’ve driven [the track] a few times on the sim, but never had a good understanding of it.  I’m really happy that I got some practice in the car between [COTA and here].”

Elghanayan’s lap of 54.407 seconds (97.531 mph) was only nine-hundredths of a second faster than Drew Staveley in the Ian Lacy Racing Ginetta G55 GT4.  Mühlner Motorsports America’s Moritz Kranz qualified third in his Porsche, followed by Randy Mueller in the Epic Motorsports No. 3 BMW.  Flying Lizard Motorsports’ Mike Hedlund will start fifth in Am, seventh overall.

Normally, the Am class is slower than the Pro-Am class.  That was not the case on Saturday.  The top three teams overall were Am teams, while Elghanayan and Staveley plan to drive both races on Monday solo.

In Pro-Am, PF Racing’s Patrick Gallagher won the class pole with a lap of 54.675 seconds (97.053 mph), good enough for fourth overall.  That lap was two-tenths of a second faster than NOLASport’s Matt Travis, who was fresh off of running the first TC class race of the day.  Team Panoz Racing’s Matthew Keegan qualified third, followed by the SIN R1 GT4 of Harry Gottsacker.  The father-son pairing of Bryce and Russell Ward were fifth in their Mercedes, 10th overall.

GTS SprintX Race No. 1 is scheduled for 9:55 a.m. EDT Monday morning.  The race will be streamed live at World-Challenge.com.