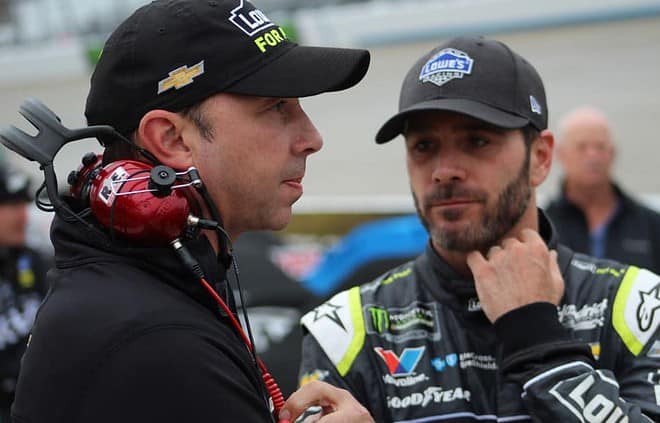 In the past, a fifth-place finish at Charlotte Motor Speedway would have been a disappointment for Jimmie Johnson. After all, he’s won at the track eight times.

But in the Coca-Cola 600 Sunday night (May 27), the top-five finish at Charlotte for Johnson was a vast improvement from the way the No. 48 Chevrolet has looked the rest of the season.

The race marked Johnson’s second top five of 2018 and his first at an intermediate track. Going into Sunday’s race, he had not even scored a top 10 at a mile-and-a-half track since the fall race at Charlotte last year.

“It’s a good day for us,” Johnson said. “We’re getting closer and it shows all of the hard work Hendrick Motorsports has put into it.”

The struggles had not been Johnson’s alone; all of HMS and all of the Chevys but Kyle Larson lacked speed for the first few months this season. Chevy’s new car, the Camaro, finally showed speed to compete with the best of the Fords and Toyotas.

Johnson’s Charlotte experience was far from perfect, though. The No. 48 was nowhere near as fast at the weekend’s start. Johnson didn’t crack the top 10 in either practice session and qualified in 23rd.

In classic Johnson fashion, it wasn’t until the green flag waved that his car took off. By the end of stage one, Johnson was in the fifth position, only the fourth time he finished a stage in the top five this season.

But Johnson’s uphill climb quickly turned into a rollercoaster-type drop. On lap 121, Denny Hamlin got into the back of Johnson and spun him out.

“He ran into me,” Johnson said. “It’s just a racing thing, I think. My spotter mentioned something late as I was committed to the lane, and he was kind of in there.”

Johnson spun in front of most of the field yet somehow, nobody ran into him. At one point, it looked as if Joey Logano wasn’t able to avoid Johnson, but then Erik Jones ran into the back of Logano and spun him away from the seven-time Monster Energy NASCAR Cup Series champion.

“I was so fortunate to not go into the wall or get hit by another car,” Johnson said. “And then we kind of got going, the car wasn’t injured or damaged.”

The wreck did not stop Johnson, as he kept on passing cars until he finished the second stage in the eighth position. But like all yo-yos, Johnson went down again.

“Highly frustrating probably about the halfway point in the race,” Johnson said. “With some small adjustments, we took about half-a-second out of the car. We didn’t know where the heck it went.”

Johnson’s crew chief Chad Knaus went the wrong way on the next adjustment, and he lost some of that blistering speed, relegating him to 11th place in stage three. But Knaus corrected the issues and got Johnson’s car back to one of the best. Prior to the final pit stops, Johnson was posting lap times only slower than Kyle Busch.

“Through some heated conversations, we put it back,” Johnson said. “The half-second came back and I drove up into the top three.”

Johnson rallied again up to the fifth position and was on Brad Keselowski’s bumper when the checkered flag flew.

“Unfortunately, the sweet spot with the car is still a little too small, and even when we’re in it we’re still not exactly where we want to be,” Johnson said. “Luckily, we finished in that sweet spot and got a good finish out of it, including a spin and we had a jack break on a stop. We had to overcome a lot tonight.”

At the halfway point in the regular season, Johnson now sits 12th in the point standings.

Michael Massie is a writer for Frontstretch. Massie, a Richmond, Va. native, has been a NASCAR superfan since childhood, when he frequented races at Richmond International Raceway. Massie is a lover of short track racing and travels around to the ones in his region. Outside of motorsports, the Virginia Tech grad can be seen cheering on his beloved Hokies.
@m_massie22
Previous Up to Speed: Jimmie Johnson Faces NASCAR Changes
Next Kyle Busch Dominates to Win 1st Coca-Cola 600 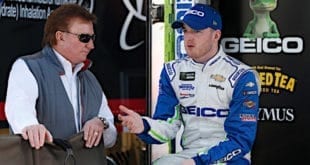 Friday Faceoff: Where Will Ty Dillon Drive in 2021?