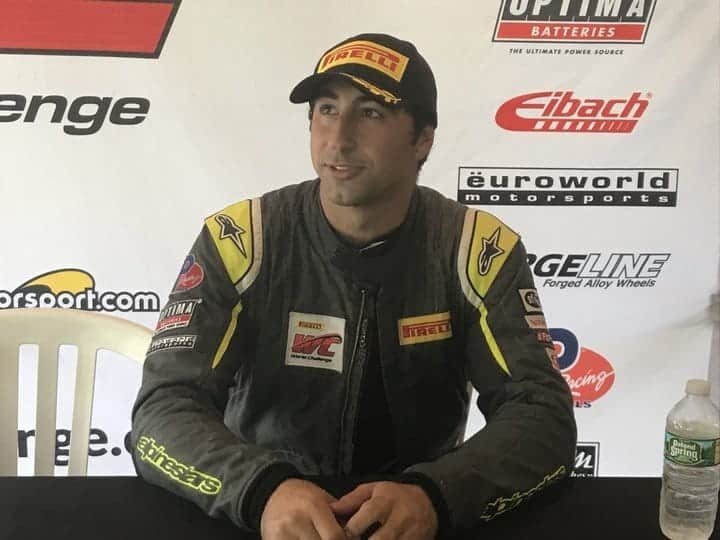 MarcoPolo Motorsports’ Nicolai Elghanayan was surprised when he won the pole for GTS SprintX Race No. 1 Saturday.  On Monday, he was a bit more confident when he took the checkered flag to win the race Monday morning.

“After lap 3 or 4, I really started to dig in,” Elghanayan told Frontstretch in the Media Center afterwards.  “That’s when I had the fun battle with the Porsche [driven by Mühlner Motorsports America’s Moritz Kranz].  He and I had a really great time.  For 20-30 minutes, him and I were toe to toe.  I made an excellent pit [stop], and luckily I was able to pass the R8 before the Mustang could catch up.”

Elghanayan started from the pole and immediately got himself in a fierce battle with Drew Staveley.  Meanwhile, a fracas broke out further down the order when Blackdog Speed Shop’s Andy Pilgrim spun in Big Bend.  That caused a scramble that resulted in four other drivers spinning out as well.  All drivers involved were able to continue on their own, so no full course caution was put out.

Elghanayan was able to hold off Staveley, but Kranz was right there as well.  A couple of laps into the race, Kranz was able to get past and take the lead.

Despite Kranz getting the lead, Elghanayan was able to stick right with him.  The two drivers battled fiercely for the next 20 minutes until the mandatory pit stops began.  In that time, Elghanayan tried to stick his nose to the inside a couple of times, but could never get up alongside of Kranz.  In addition, the duo were able to pull away from Staveley and PF Racing’s Patrick Gallagher.

Elghanayan had a great stop and was able to get out in front of all of his rivals while Kranz continued to make laps.  Kranz made his stop about seven minutes after Elghanayan, but had to get out of the car in favor of Efrin Castro.

The Mühlner team’s pit stop was decent, but it was not quick enough to prevent Elghanayan from jumping the No. 21 Porsche and taking the lead away.  Castro rejoined in third, but quickly dropped back.

Once in the lead, Elghanayan had the No. 55 Ford Mustang GT4 of Jade Buford giving chase.  However, Elghanayan was able to outdistance Buford and pull out to a three-second lead.  That lead nearly disappeared when Rearden Racing’s Jeff Burton (not the same Jeff Burton from NASCAR) managed to spin twice in two laps at the same spot, then rejoined from the second spin directly in front of Elghanayan’s KTM.  In addition, Burton kicked up a bunch of dirt and stones on the track.

That allowed Buford to close up on Elghanayan, who spent some time getting past the slower Audi R8 LMS GT4.  Buford’s chances for victory were all for naught, though.

With 16 minutes to go, ST Racing’s Aurora Straus and Murillo Racing’s Christian Szymczak collided in the Diving Turn, resulting in both drivers spinning into the tires to bring out a full course caution.  Both drivers were ok, but both cars were done for the day.  While Szymczak and teammate Matthew Fassnacht were done for the day, ST Racing borrowed a car from Classic BMW/Fast Track Racing so that Straus and Jon Miller could compete in race No. 2.

During that yellow, tire barrier repairs and a wave-around were undertaken.  Unfortunately, the wave-around took too long to be completed.  As a result, the race ended under yellow, giving Elghanayan the win.

Given the situation, Pirelli World Challenge officials decided to declare the results officials as of the 45 minute mark.  Gallagher and Buford ended up second overall, but that was still good enough to win the Pro-Am class.  Staveley finished third, followed by NOLAsport’s No. 47 Porsche for Jason Hart and Matt Travis.  Harry Gottsacker finished fifth overall.

The good news continues to come in for Elghanayan.  He turned in the fastest lap of the race at 54.341 seconds (97.650 mph), which gives him pole for Race No. 2.  Race No. 2 is scheduled to go green at 2:25 p.m. EDT Monday afternoon and will be streamed live at World-Challenge.com.