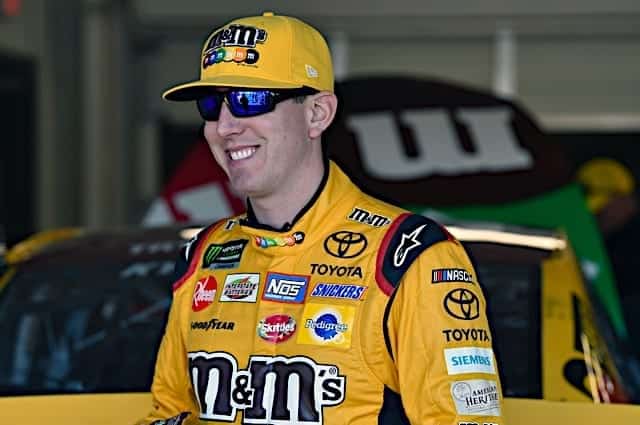 Domination is an understatement for what Kyle Busch did en route to his Coca-Cola 600 win at Charlotte Motor Speedway on Sunday night (May 27).

Busch swept all four stages of the race and led 377 of the 400 laps. The margin of victory was 3.8 seconds over runner-up Martin Truex Jr., and only nine cars finished on the lead lap.

“This one’s very special,” Busch said in Victory Lane. “I don’t think there’s anything that can top Homestead, just with the meaning of what the championship is, but the Coca-Cola 600 – I’ve dreamt of this race since I was a kid and being able to win this race. Always watching the All-Star race and then the 600 the following weekend and being able to come out here and now win the Coca-Cola 600 is just phenomenal.

It’s a little boy’s dreams come true and man, I just want to say that I thank NASCAR, for one, for giving me a chance to come out here and have this opportunity to race for my dreams and to accomplish those things. I don’t know if it’s ever been done before, but the first one to check off all the tracks and get it all done. I don’t want to go to any new ones. That would just have to start the whole process over.”

Toyota swept the podium, with Denny Hamlin finishing third. Brad Keselowski and Jimmie Johnson both rebounded from early struggles to round out the top five. Keselowski missed his pit box early in the race and Johnson spun after contact with Hamlin on lap 121. – Michael Massie

Brad Keselowski scared his competition after winning the pole for Saturday’s Alsco 300. Hell, he entered the race as a three-time winner of the event.

Keselowski dominated early on before fellow Cup Series driver and bitter rival Kyle Busch grabbed the top spot away from the No. 22 team. The No. 18 car went on to sweep the opening two stages, leading 93 laps.

There were nine cautions in the final 100 laps of the race, including a last-lap crash that involved Ty Majeski and Tyler Reddick. But it was a restart with 39 laps to go that changed the complexion of the race.

Busch made a bold three-wide move under Dylan Lupton for the seventh position on the restart, but the No. 18 ran the left side tires into the grass, spinning in the middle of the field. Chase Briscoe was the only other driver involved. Over the final 35 laps, Busch rebounded to finish eighth.

Over the final 30 laps, Keselowski had to hold off hard charges from Christopher Bell and Cole Custer to pick up the victory. It marks his fourth at the track, and second of 2018, also winning at ISM Raceway in early March.

There were storylines galore entering the 102nd Indianapolis 500, but Will Power’s win trumps them all.

Power started on the front row and led 59 of the 200 laps. After Stefan Wilson and Jack Harvey couldn’t complete the successful fuel mileage run to the finish, Power retook the lead and never looked back. Pole sitter Ed Carpenter led 65 laps and finished second.

The universal aero kit, which has been widely acclaimed by drivers, didn’t quite get the same amount of positive reception on Sunday. Some of the series’s best drivers lost control of their cars through the turns, resulting in a crash-filled day.

Patrick’s career ends on a sour note. She was unable to finish either of the “Danica Double” events. Still, the grandstand crowd gave her a standing ovation when she climbed out of her wounded No. 13 GoDaddy Chevrolet.

Castroneves wrecked similarly and also got a significant cheer from the fans. During his television interview, he begged his team owner Roger Penske to give him another chance at the Indy 500. Penske and team president Tim Cindric told the press that he would race in next year’s running, so perhaps we haven’t seen the last of the Brazilian driver after all.

Takuma Sato, who entered the day as the defending champion, had his day end early because of the moving chicane named James Davison. Davison’s No. 33 Chevrolet was well off the pace when Sato rear-ended him in the middle of a turn, which brought out the race’s first caution. Sato finished 32nd.

The series goes to The Raceway at Belle Isle in Detroit next week for a double race weekend. –John Haverlin

Karl Wittmer inherited the pole after BERG Racing’s John Weisberg was excluded due to a fuel issue.  On the start of the race, Wittmer was able to hold onto the lead while teammate Matt Travis moved up to second.  From there, the two blue and white BMW M235iRs were untouchable.  They were able to open up a huge gap on the field and settle things among themselves.

Ultimately, Wittmer held on for the win, beating out Travis in a Classic BMW/Fast Track Racing 1-2.  Vesko Kozarov was third, followed by Weisberg from the rear and Jeff Ricca.

Johan Schwartz failed to finish race No. 1 due to an overheating problem but turned in the fastest lap in the race.  From pole in Race No. 2, Schwartz led flag-to-flag to claim victory in his Rooster Hall Racing BMW M235iR in West Virginia University colors.

Schwartz beat Ricca’s Hyundai Genesis Coupe by just over a second.  Travis and Wittmer were third and fourth, while Robert Nimkoff was fifth.

TC points are unofficial, but it appears that Wittmer has taken the points lead after Kozarov finished seventh in race No. 2. – Phil Allaway