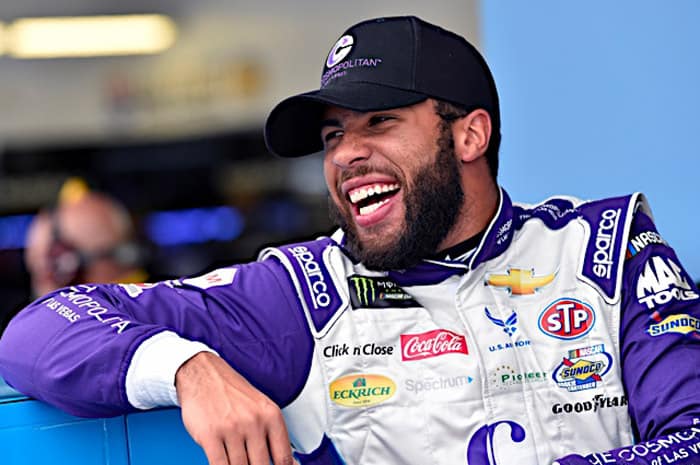 The stars of the Monster Energy NASCAR Cup Series tackled the longest race of the season, the Coca Cola 600, at the Charlotte Motor Speedway on Sunday night.  This was the only race of the season that consists of 4 Stages, 100 laps each, fora total of 400 laps.

This race usually provides some of the underdogs of the series an opportunity to get some solid finishes.  Unfortunately for the lower budget teams, there was not much of an opportunity to race for the win as Kyle Busch led 377 out of the 400 laps and captured his first win at the Charlotte Motor Speedway.

It was a solid night for several of the underdogs though.

TOP OF THE CLASS

Leading the way was Darrell Wallace Jr. in the Richard Petty Motorsports No. 43 car.  Wallace finished in a solid 16th place in his first Coca Cola 600 after running as high as 11th throughout the race.

“I’m really proud of this team and what we did in our first Coca Cola 600 together,” said Wallace after the race. “Our Kroger Chevrolet Camaro ZL1 was fast all night.  We were better in the day but we hung in there for a good finish.”

Other notables inside the top 20 included Michael McDowell, who scored an 18th place finish in his Front Row Motorsports No. 34 Ford.  This was McDowell’s second straight top-20 finish after finishing 20th in the previous pints race at Kansas Speedway. Kasey Kahne also scored a top-20 finish.  Kahne had a very strong run throughout the race and ended up as high as 7th at the end of Stage 3 to score some valuable Stage points. His car would fade though and he would wind up 20th by the end of the night.

Ty Dillon scored a solid 21st-place finish after running inside the top 20 and on the lead lap for a majority of the night.

One underdog who had his most consistent run of the season was Ross Chastain in the No. 15 Premium Motorsports entry.  Chastain started in the 25th position, his best starting spot all year. He hung around that spot all night, and even stayed on the lead lap for a good portion of the race.  Chastain wound up with a 24th place finish, but had a very solid night for that team.

The Coca Cola 600 is a race of endurance, and some of the underdogs did not have the night they were hoping for.  The “Bad Luck” award of the night went to Matt Dibenedetto who finished 36th after a mechanical issue relegated him to the garage on lap 257 and ended his night.

Chris Buescher also had a rough night after slapping the wall on lap 260.  He would eventually finish 29th.

AJ Allmendinger and David Ragan both struggled later in the race and finished 23rd and 25th respectively.  Ragan ran inside the top 20 for the first half of the race, but after slight contact with the wall, he began to fade.  Allmendinger ran inside the top 15 for a portion of the race on Sunday night, but struggled most of the night to get a handle on the No. 47 Chevrolet.

Parker Kligerman ran his first MENCS race of the season for Gaunt Brothers Racing and scored a solid 27th place finish for the team.

Jeffrey Earnhardt scored a top-30 finish for only the second time this year in his first race for Premium Motorsports.