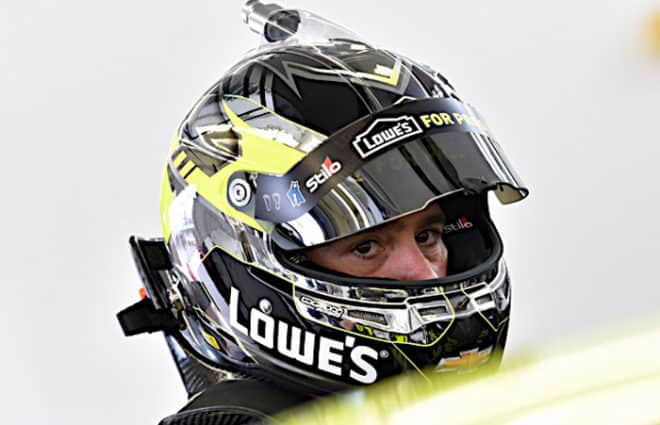 Bryan Gable May 28, 2018 Bryan Gable, Cup Series, Featured Content, Up to Speed Comments Off on Up to Speed: Jimmie Johnson Faces NASCAR Changes

For most of his NASCAR career, Jimmie Johnson has been a picture of stability.  Going all the way back to his first Cup Series start, Johnson has piloted the No. 48 car for Hendrick Motorsports and Lowe’s has sponsored the majority of races for him each year.  Chad Knaus joined the No. 48 team as crew chief for Johnson’s first full season in 2002 and the pairing has lasted to this day.

In each of his 16 full-time seasons, Johnson has never failed to win at least two races.  He has qualified for the postseason in every year of its existence.  He also collected a handful of tracks where he was all but guaranteed to be challenging for the win in the closing laps.  Even as NASCAR went through a flurry of changes with points systems, new cars and rule revisions, Johnson kept cranking out wins and championships.  No matter what changed around them, the No. 48 team’s key players remained NASCAR’s most reliable performers.

However, the 2018 season has an entirely different feel as far as Johnson is concerned.  A tidal wave of change has hit NASCAR, and this time? Not even the No. 48 team has been able to stay dry.

Johnson has been facing team changes, both inside and out.  Within Hendrick Motorsports, he is the last veteran driver standing after the departures of Dale Earnhardt Jr. and Kasey Kahne.  Replacing Kahne is William Byron, who is brand new to the Cup Series. While Alex Bowman is familiar with NASCAR’s top division and Hendrick Motorsports, his development with the team remains a work in progress.  Johnson’s longest-tenured full-time teammate is now 22-year-old Chase Elliott, only in his third season of Cup competition.  While his young teammates might bring a fresh perspective to HMS, it’s a significant change for Johnson, who no longer has the veteran expertise of Earnhardt, Kahne, Jeff Gordon or Mark Martin piloting the Hendrick cars with him each week.

Additionally, HMS seems to have struggled with the new Camaro ZL1 Chevrolet is using in Cup this year.  The whole team has been a step behind its traditional rivals and Johnson’s performance has slipped as a result.

That’s led to some unfamiliar finishes at racetracks Johnson used to dominate. For years, venues like Martinsville Speedway, Texas Motor Speedway and Dover International Speedway may as well have kept pre-engraved winner’s trophies on hand for whenever the champ showed up to compete.  But in 2018, he’s only run respectably at Dover, and even that’s a stretch. A ninth-place finish with some laps in the top five is not “running well” for him at a place where he’s used to much loftier results.

In fact, Johnson’s last win was at Dover nearly one year ago.  He remains in the longest winless stretch of his career just 18 months removed from a championship.  Maybe the most shocking statistic of 2018 is Johnson has not led a single lap. The tracks that have been able to cure Johnson’s early-season struggles in the past have not restored the health of the No. 48 team, at least not yet.

Even with Johnson’s uncharacteristic on-track woes, nothing is a bigger signifier of chance for him than his ongoing sponsorship search.  Lowe’s announced back in March that it would not return to sponsor Johnson next year.  Unfortunately, the departure of a nearly-full season sponsor is not a new trend in NASCAR over the last few years.

It is, however, a new problem for Johnson.

The presence of the Lowe’s emblem on the hood of the No. 48 was a major component of the team’s reputation for stability.  Scraping together piecemeal sponsorship deals slowly became a more common theme in NASCAR during the last decade, even for the sport’s top drivers.  But the No. 48 team never had to worry about that.  Johnson always seemed to be the one driver who was sure to have stable financial backing. Now, even that distinction is gone too.

To be sure, the situation is not all doom and gloom for the No. 48 team.  Johnson has a good chance of finding a suitable sponsorship deal, and he still has his partnership with Knaus and a ride at HMS for as long as he wants to race.  Yet Johnson’s ability to fight against the changes around him, changes from outside his team, will define the final years of both his career and his sponsorship hunt.

In terms of wins and championships, Johnson was a successful product of the search for the next Jeff Gordon.  The group of drivers who broke into the Cup Series around the same time as Johnson redefined the limits of what young racers could accomplish and carried the sport through the 2000s.  But Johnson’s peers have now begun to leave their driving days behind.  Earnhardt, Tony Stewart, Greg Biffle and Carl Edwards have stopped racing in NASCAR for good, at least in Cup.  Matt Kenseth has returned on a part-time basis, but his reunification with Roush Fenway Racing feels like a project that will eventually take him beyond the driver’s seat.

Kahne continues to race, as do Kurt Busch, Jamie McMurray and Ryan Newman. But they have only combined to win 10 times in the last five years’ worth of races.  Five of those victories belong to Busch alone, who has enjoyed a fine run with Stewart-Haas Racing, though one with long stretches between wins. Only Johnson and Kevin Harvick have maintained their status as reliable championship contenders among the early 2000s young guns.  If the early trends of this season continue, Harvick will soon stand alone.

On the other hand, would it really be that surprising if Johnson has strong runs over the next couple weeks and began a march to another postseason appearance? A top-five run at Charlotte could be the spark that turns this seven-time champion around.

The No. 48 team may have lost some of its mystique, but it is not all gone yet.  Johnson has proven that he has the ability to rise above the changes around him.  Swimming through the tidal wave one more time would set Johnson up well to find a new sponsor who could carry on the famous stability of the No. 48 team.

Bryan began writing for Frontstretch in 2016. He has penned Up to Speed for the past three years. A lifelong fan of racing, Bryan is a published author and aspiring motorsports historian. He is a native of Columbus, Ohio and currently resides in Southwest Florida.
Previous Daniel Ricciardo Wins Maiden Monaco Grand Prix
Next Jimmie Johnson Shows Speed in Top-5 Coca-Cola 600 Finish