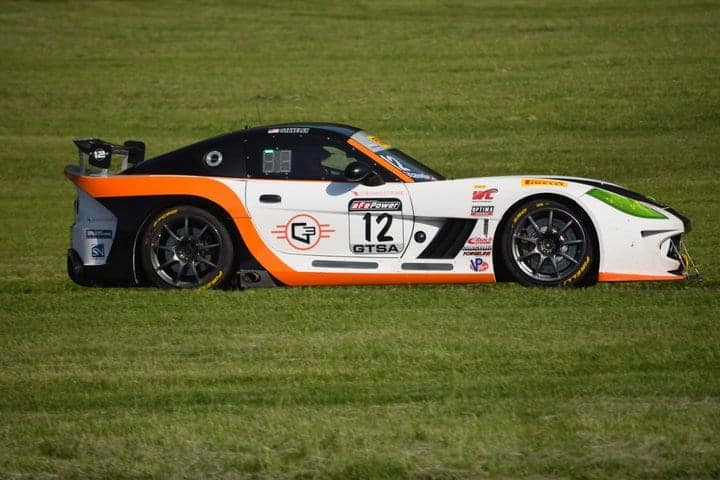 Ian Lacy Racing’s Drew Staveley was content with a second-place finish in Monday’s GTS SprintX Race No. 2 at Lime Rock Park.  Then, leader Nicolai Elghanayan slowed dramatically with less than five minutes to go.  Staveley was able to snatch the lead at the point and hold on for the overall victory.

Elghanayan, who won Race No. 1 earlier in the day, started from the pole and led on the first lap.  However, a massive crash involving Kris Riddle, Michael Camus, Stevan McAleer and Gar Robinson broke out in the Climbing Turn.  A large amount of fluid was put down on track, resulting in a 25-minute full course caution to remove the cars and clean the track.  Of those involved, only Camus was able to continue.  He would finish 14th overall.  Riddle was transported to a local hospital for concussion-like symptoms following the crash.

Just as the race restarted, Team Panoz Racing’s Dr. Preston Calvert spun in the Diving Turn and backed hard into the Armco barrier.  He was able to crawl the car back to the pits to prevent a second full course caution, but he was done for the day as well.

Elghanayan had the lead, but Case-It Racing by Flying Lizard’s Ryan Eversley was right on his tail.  Eversley tried as hard as he could, even getting alongside Elghanayan at one point.  However, the Californian was able to hold him off.

Elghanayan gained a big lead during the mid-race pit stops, increasing his advantage from two seconds to five.  That led expanded from there at the rate of nearly one second a lap until the advantage was nearly one-third of a lap.

Meanwhile, Staveley ran down Team Panoz Racing’s Matthew Keegan and easily took second-place overall away with 10 minutes to go.  From there, it looked like Elghanayan was home free.  Then, the tires completely wore out and rendered Elghanayan incapable of running competitively.  After the race, Elghanayan blamed his race with Eversley for the tires going off as Eversley pushed him to the max.

Staveley’s margin of victory in class was 10.722 seconds over Mühlner Motorsports America’s Efrin Castro and Moritz Kranz, who finished fourth overall.  Despite the tire issues, Elghanayan still held on to finish third in Am, 30 seconds back in ninth overall.  A post-race penalty for Classic BMW’s No. 92 resulted in ST Racing’s Jon Miller and Aurora Straus finishing fourth with a borrowed car.  Epic Motorsports’ BMW of Camus and Randy Mueller were fifth.

In Pro-Am, Keegan was able to get past the Case-It No. 23 Audi after Eversley pitted to put Merzon in the car.  From there, Keegan was able to pull away to take the Pro-Am victory.  The pass that Staveley made on Keegan in the closing laps ultimately turned out to be the overall victory, but second-place was good enough to take the Pro-Am victory.

GTS teams will take the next two weeks off before returning to action at Road America the weekend of June 22-24 for regular sprint races.  The rounds will be combined with the GT, GTA and GT Cup classes.