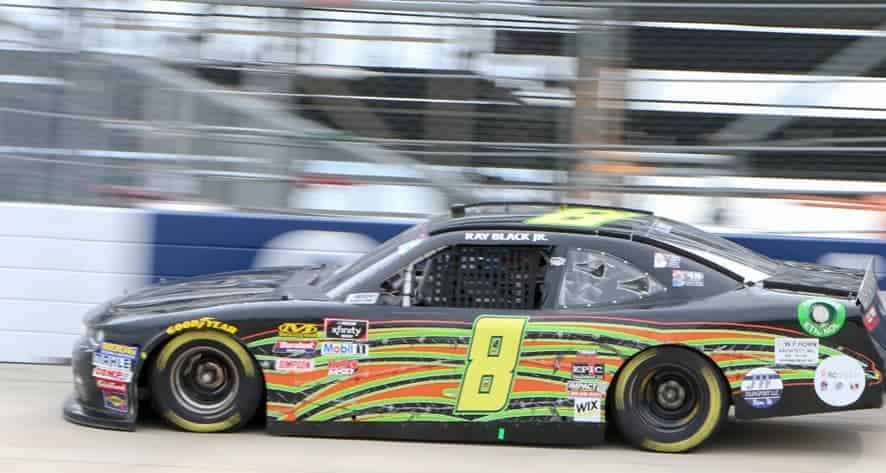 Ray Black Jr. is in unfamiliar territory in 2018 — he lacks a full-time ride in any of the top three NASCAR national touring divisions.

In 2o15, Black drove full-time with SS Green Light Racing in the Camping World Truck Series. In 2016, he moved to the NASCAR XFINITY Series with the same organization and finished 19th in points. Though he didn’t technically run full-time in 2017, the Florida native did compete in 21 of 33 XFINITY races while piloting the No. 51 Monster Energy NASCAR Cup Series car for Rick Ware Racing in a trio of events.

Through the first three-and-a-half months of 2018, Black has competed in a pair of XFINITY races.

Yes, he attempted to qualify for the season-opening race at Daytona in the No. 99 car for B.J. McLeod Motorsports, but wasn’t quick enough to get into the race, thus sending him away from his home racetrack.

Black will be damned if he gives up on racing.

“It is tough not running full-time for sure,” Black told Frontstretch. “For us, we’re definitely thinking about next year and what we’re doing, hopefully come back full-time. That’s our main goal. I think this year was basically just keeping me in the seat as much as I need to just to keep warm and be ready to go.”

In Black’s two races this season for B.J. McLeod Motorsports, he finished 27th at Dover International Speedway and, most recently, finished 19th last weekend at Charlotte Motor Speedway. His No. 8 car had to come from the rear after turning the 37th quickest time in qualifying.

Despite the start being tied for his worst qualifying spot in the series in 57 career races, Black methodically made his way through the field to give BJM its third-best finish of the season.

“It wasn’t that challenging, I think [it was] more of patience,” he said of moving through the field. “That’s one thing I’ve always tried to have and get better at it is having a lot of patience, especially on restarts. Not getting too aggressive and knowing when to race and when not to race.

“It’s definitely a huge accomplishment for them and me getting back in the seat for the second time this year, pulling out a top 20 was pretty awesome. There were a lot of cautions, which helped some of the smaller teams stay in the running for a good finish. At that point, it comes down to execution.”

During the first stage of the race, Black was able to remain on the lead lap, holding off going down a lap to leader Kyle Busch, and ended the 45-lap stage in 27th. However, in stage 2, the No. 78 team experienced problems with one of the front tires, forcing the driver to make an unscheduled pit stop. Black finished the stage in 34th.

The final stage, which saw nine cautions, including a pileup on the last lap, allowed Black and the No. 78 team to move up the leaderboard, finishing ahead of a pair of JR Motorsports and Roush Fenway Racing machines. Black ended up in 19th and thought he could have gained a few more positions had he gotten a better restart on the overtime finish.

“I felt like if we had a little better position at the end, we could have fought toward a 15th-place finish [and raced] with Garrett Smithley,” Black said. “Especially with a green-white-checkered like that, as long as you get a good restart and clear the guy that you’re racing next to – it’s really hard to make a pass.

“I’m excited to get back behind the wheel because once these little kinks get worked out with this team, we can really fight for some better finishes, especially if we catch some breaks during the race.”

The way Black got paired with BJ McLeod is quite interesting.

The two fellow drivers are both from Florida and grew up racing late models, trying to make a name for themselves in NASCAR. Black was scheduled to run full-time this year in the Cup Series with Rick Ware Racing, but the deal fell through during the off-season. He went to former team owner Bobby Dotter, who said “you should go over to BJ and do some racing,” since SS Green Light Racing was essentially full, running two teams this year with Spencer Boyd and Joey Gase (in an alliance with Go Green Racing).

Looking ahead in 2018, Black believes he has “five to six” races remaining with B.J. McLeod Motorsports, while also looking for opportunities elsewhere. He is confirmed to be competing for BJM at Daytona in July, likely in the No. 99 machine.

“We just pick and choose with what races he has available and go from there and get seat time,” Black said. “They have a lot of different packages coming up, so if we can win one of those races it would be fun to hang out and see what’s going on.

“They [BJ McLeod Motorsports] have some really good equipment, a good crew and everything, so I feel right at home with them. They like to have fun and don’t take it too serious, which is nice. They like to have a good time at the racetrack and it’s nice to have that experience.”

But at the end of the day, Black would like more experience in the Cup Series after a best finish of 34th in three races last season.

“We’re trying to get some things worked out on that side and do some more races with some Cup stuff,” Black said. “We’re still in negotiations and trying to figure out what’s a good deal for us and where we fall into line with that program.”