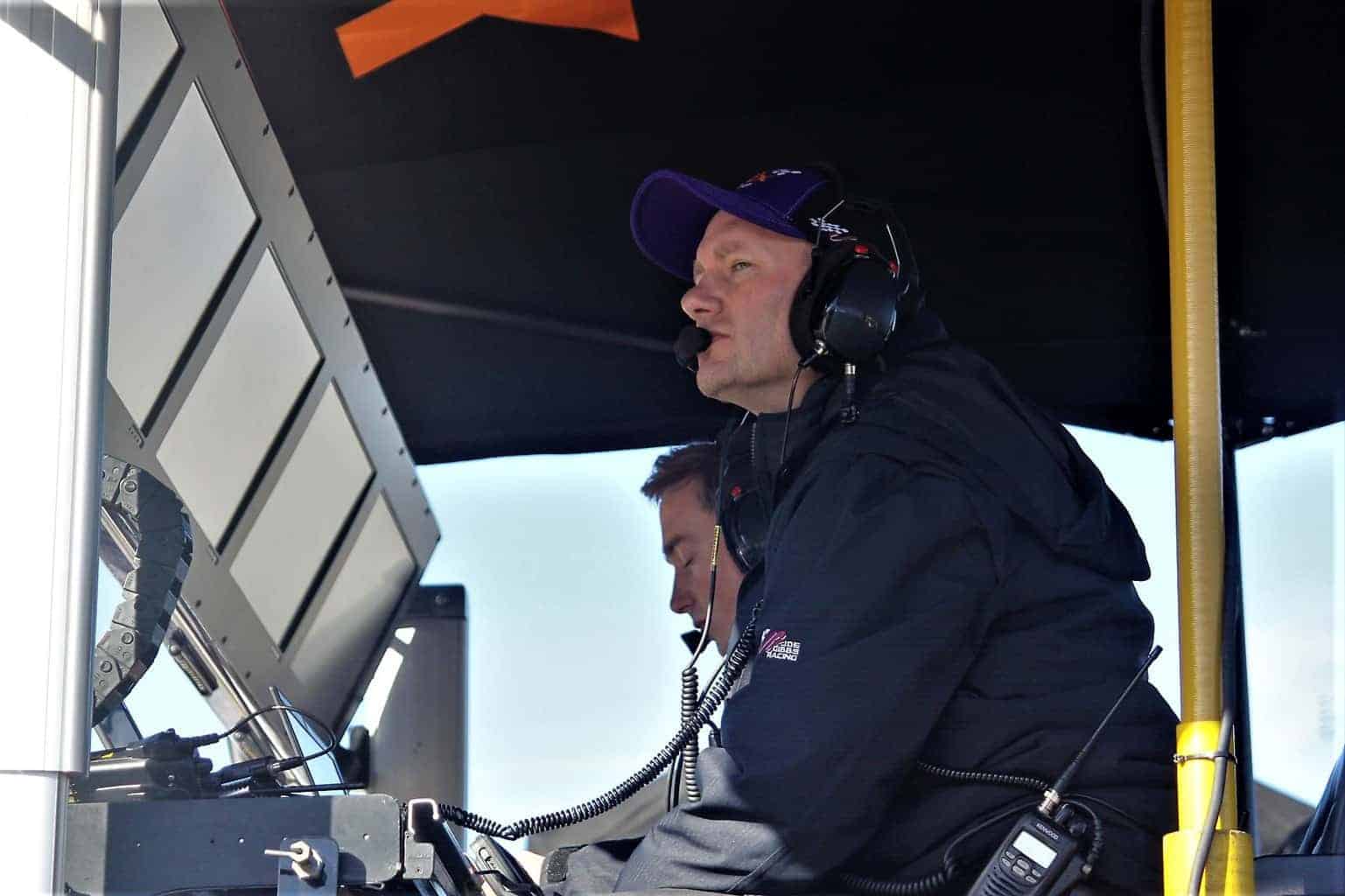 Crew chief Mike Wheeler on the No. 11 box

After the longest race of the season, the Monster Energy NASCAR Cup Series prepares to head to one of the four longest ovals on the schedule.

The triangle-shaped Pocono Raceway in Long Pond, Pa., offers very unique challenges for the teams and crew chiefs. Mike Wheeler is preparing the No. 11 for Denny Hamlin to attack the two-and-a-half-mile track where he scored his first two career victories and three of his first five.

In anticipation of Pocono, Wheeler is preparing for shifting in two and possibly all three corners at the Tricky Triangle. He also has to balance his braking system, which will get huge usage in Turn 1 but will have average to light usage in turns 2 and 3. Keeping the brakes at optimum operating temperature will be a challenge, because they can actually be cooled too much with light usage over most of the laps. He wraps up Tech Talk this week with a discussion about how he determines how stiff his suspension will be to work through the tunnel turn.

Mike Neff – At Charlotte last weekend, did you experience anything where the track temperature didn’t seem to change more than 10-15 degrees over the duration of the race?

Wheeler – Yeah, I would agree with that. One thing that is obvious [is that] the late afternoon sun at Charlotte heats up turns 3 and 4 the most. The way it comes over the stands in turns 1 and 2 it points directly at the banking in turns 3 and 4. That is always the bad corner in practice — really low grip, hot and slick. With it being overcast, cloudy and cooler, it didn’t really change as drastically as it has in the past.

Neff – A lot of crew chiefs were talking about the left rear tire on Kyle Larson‘s No. 42 after his incident in Turn 1. Have you noticed a lot of people looking into the idea of a softer left rear tire in order to try and gain some more speed?

Wheeler – Yeah, I definitely noticed that. It was quite surprising. It looked pretty violent. You see something like that at a road course or maybe even Martinsville [Speedway], when you are braking hard. Obviously, we’re all going to try and stay away from an incident like that. At the same point, it was intriguing. We actually had that happen to us last year practicing for qualifying for the All-Star event. Denny came through [turns] 3 and 4, thought he was at 80 percent throttle, but it still happened and he fenced it. I have lived it a little bit, and when you’re at the limit of traction, you can get in trouble.

Neff – You’re heading to Pocono, where the longest straight in the sport leads to a heavy braking section into Turn 1. Is getting the car slowed down for that turn one of the biggest concerns of the weekend?

Wheeler – Due to the fact that it is a flat, fast intermediate track, you think about aero, downforce, motor and drag, but when it comes to Turn 1 you think about braking as much as we do at any other track that we go to all season, both total ability to slow the car down and also balance of the braking. You can definitely get yourself in trouble as far as getting loose in, tight or wheel hopping, or just not enough brake overall. You have to be careful there. It is one of those tracks where you are on the straight so long you can actually overcool the brakes. At the same time, you have to make sure you have enough brake to get the car slowed down appropriately.

Neff – With the brakes used so hard in Turn 1 but not used that hard in turns 2 and 3, does it afford you the ability to not worry about cooling that much since the majority of the lap you aren’t worried about them?

Wheeler – Yeah, you mainly need to keep them cool enough to function fully in Turn 1. The other corners are average use compared to other tracks that we go to. You can actually overcool brakes, getting the rotors too cool and they end up chattering or developing cracks if you aren’t careful. There is a balance there. Obviously, you don’t want to overcool to the point that you lose downforce and grip, in that sense, but you also don’t want them to get too hot where you end up with pedal fade.

Neff – There is compromise at Pocono because each of the three corners are uniquely different. With the advancements in technology, are you able to get the car more balanced in all three than we used to, or is it still a matter of compromise in turns 1 and 2 in order to make Turn 3 ideal in order to make passes on the front straight?

Neff – The primary passing zone over the years has been getting into Turn 1 with the drafting and braking that you can take advantage of heading into that corner. What is it that you work on or focus on in order to get the best drive out of Turn 3?

Wheeler – A lot of times they change tires and it can make you tight off of Turn 3 or loose off of Turn 3. Turn 3 is a corner where you are generally shifting. You are slower through there because of the flatter banking, and you have that long straight ahead of you. Using third gear to help you get off of the corner better is something you can do. Platform is a big deal as well, but it is ultimately the biggest corner to make sure you get off of appropriately, because if you don’t, it makes you slower down the straightaway.

Neff – Pocono is one of the first ovals where NASCAR started shifting. What is it that determines if you are going to shift there or not?

Wheeler – A lot of times it is just pace. There are times that NASCAR will dictate gear ratios. Honestly, it goes back to if the pace slows down a lot and your corner speeds drop down to a low enough RPM you can actually grab third gear, use your engine torque and rear wheel drive torque, to get off of the corner faster. Ultimately, you do lose a little bit of time shifting; it is not a free shift. At the same point, you can get more rear wheel drive torque by going to a lower gear. Obviously any time you have more motor you are usually faster.

Neff – The shift usually comes on the front straight. Is there benefit to shifting between turns 1 and 2 as well?

Wheeler – A lot of guys shift off of Turn 1. It is a heavy-braking, decently banked corner. So a lot of guys shift in turns 1 and 3. Some of the guys set up to even try and shift through Turn 2 at some points in the race, again, if the speed drops low enough in the corner. It is the corner that has the least amount of shifting.

Neff – Do you have to adjust your spring and shock rebound to keep the car down on the track as much as possible, or do you keep the suspension stiffer and just have the driver deal with it?

Wheeler – Every year when we go there, we have to quantify that. Winters come and go, the ground freezes and thaws and the characteristics are a little bit different every year. The track fixes some issues every season. The tunnel I don’t want to say collapses but settles a little every year. Even a fraction of an inch can make a bump bigger and a problem. Every year we go back there, we have to decipher if we need to work on our shock and spring package to get over the bump better or if we can just focus on platform. It is always a surprise when we get there. You never get the note until the first run on the track to decide if the bump is a problem now.

Neff – A handful of years ago they did a patch in Turn 3 where the outside lane in the turn was actually the place to run because there was so much grip. Are we to the point where the bottom lane is back to being the preferred way through the final corner?

Wheeler – That grip strip up top was definitely the place you had to be for a couple of years. Now, with some different tires and aero packages you can definitely move around more. It is the same deal. Some people can get half a lane up for a full lane up working well for them based on their balance and how their suspension is set up for turns 1 and 2 versus Turn 3. It is definitely winding down, though, and Turn 3 is certainly not a one groove turn anymore.

Neff – Pocono gets treated a lot like a road course due to the size of it and the ability to not lose a lap when you pit. How much fuel can you save on that track to ultimately decide how early you can come in for that final pit stop?

Wheeler – You can save some, but being two-and-a-half miles long, it is harder to save a lap. When you are at Bristol [Motor Speedway] or Richmond [Raceway], you can save a couple of laps pretty easily. In order to save 2.5 miles of fuel, it is a pretty big challenge. Ultimately, any race can become a fuel mileage race. However, if you are going to be five laps short at Pocono it sounds attainable, but at the same time that is 10 miles, and that is hard to make up. You don’t have to lose a lap pitting at Pocono, and that changes your strategy quite a bit compared to some of these tracks. That changes your mindset quite a bit as you head to Pocono.