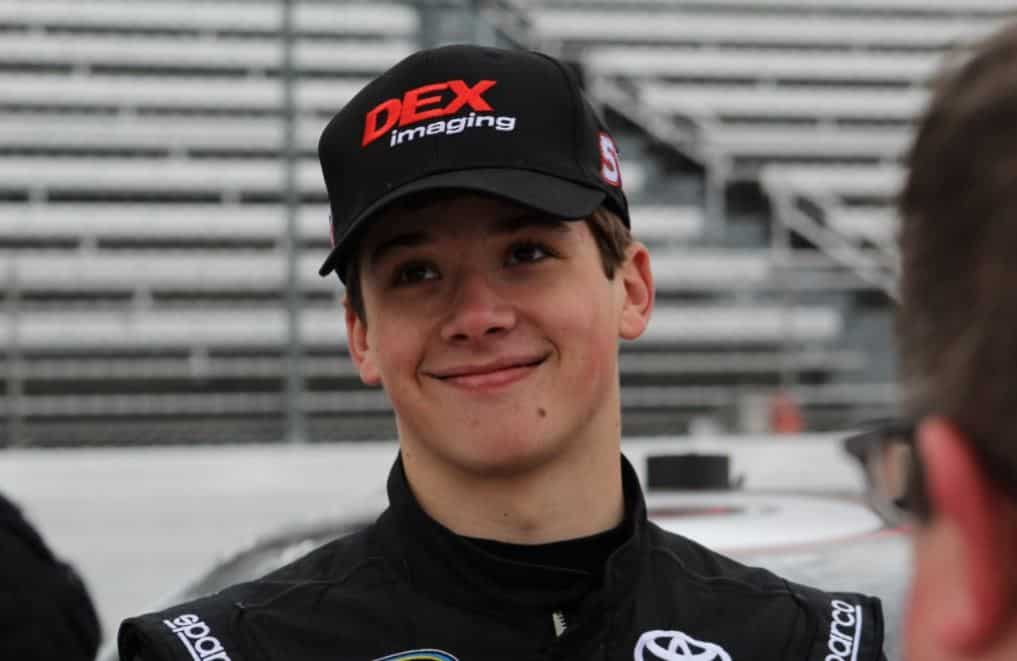 It doesn’t matter if it’s points-leading regular drivers or part-time entrants, MDM Motorsports has turned the ARCA Racing Series into its playground in 2018. For the second consecutive race, the organization’s No. 12 car visited Victory Lane, this time with Harrison Burton at Pocono.

Burton, making his superspeedway debut, capitalized after Noah Gragson, who dominated the first half of Friday’s race, suffered a pit road penalty for an uncontrolled tire and spent the rest of the afternoon mired in traffic. Burton was followed by teammate Sheldon Creed, who mounted a strong challenge late in the going for the win, with Zane Smith, Travis Braden and 2017 Pocono winner Riley Herbst rounding out the top five.

Burton’s performance in his superspeedway debut was good for far more reasons than resulting in a race win; the No. 12 car didn’t find itself in a bad spot all afternoon. Burton was smooth in the pits and on the racetrack, eventually winning this race after besting Creed as he attempted to slow the field on the final restart inside of 10 laps to go. Also worth noting was the maturity displayed by Burton in Victory Lane after the race, thanking both his mom and dad for their aid in his career. His father Jeff was always a class act in addition to a talent on the track, and it appears the apple hasn’t fallen far from the tree. Here’s to the Burtons continuing to do the Commonwealth of Virginia proud…even if they’re calling NC home now.

Even though Creed lost the lead late when he made a misguided attempt to slow the field coming to the final restart, the former dirt racer’s performance for a first-timer at Pocono was excellent. He managed to keep his car off the wall and in contention despite being so loose in the first half of the race that he required five turns of wedge to tighten the car up and proved adept in dicing through the field exiting Turn 1 to deliver a runner-up result. It’s when, not if, Creed will win this season.

Inside of 10 laps to go, it appeared that Creed’s day would even result in retaking the championship points lead, but that went out the window when Smith went into beast mode for the closing laps of the race. He went from ninth to third in the final seven laps of Friday’s 200-miler, and in doing so maintained the points lead.

Travis Braden came out of seemingly nowhere, capitalizing on a successful Pocono test on Wednesday to score a season-best finish of fourth, his first top five of 2018 and equalling his career-best finish with Don Fike’s No. 27 team.

Herbst defended his 2017 spring Pocono win with a fifth-place finish, marking the first time since Elko and Pocono last season that he has scored consecutive top-five finishes.

Gus Dean rebounded from a bad pit stop that wasn’t his fault (LB Skaggs’ No. 71 car came to a stop in Dean’s pit box as he was stopping under green) and a lap 47 spin to finish sixth. And though Skaggs’ pit gaffe was significant, he finished Friday’s race, his superspeedway debut, on the lead lap in 14th with no damage to his car and no on-track incidents of note.

Hixson Motorsports was on the entry list for the first time since Nashville, with Steve Fox finishing in the 19th position driving the team’s No. 3 car.

Thad Moffitt’s superspeedway debut did not go to plan, with the No. 46 team completing only 29 laps and finishing 25th. Brian Kaltreider’s first ARCA start of 2018 didn’t go well either, with the No. 07 car completing only 26 laps in finishing 26th. For those folks watching Friday’s race on FS2, they’d never have known, as the commentary booth offered no updates at all on these drivers’ issues or their exits from the race.

Will Rodgers’ first race in the No. 52 taking over for Brandon Grasso did not yield great results after scoring a top 10 in Charlotte last week; Rodgers scraped the wall exiting Turn 3 on lap 7 and spun again on the Long Pond straightaway after being hit in the back by Max Tullman’s No. 78. Despite a top-five qualifying effort, Rodgers finished the day 18th with a banged up car, continuing a disappointing season for a No. 52 team that dominated the ARCA Racing Series a year ago.

Mason Mitchell Motorsports failed to place a car in the top 10 despite fielding two entries, the first time the team has done that since Talladega last year.

Tony Mrakovich’s “home game” race at Pocono was an unmitigated disaster. His No. 11 car spun out unassisted on the first lap of the race. On lap 38, he spun for a second time. On lap 44, he nearly spun out for a third time, avoiding such a fate only because Chase Purdy slowed his No. 8 to a near stop on the backstretch to avoid contact. And lastly, on lap 60 Mrakovich spun again exiting turn 2, this time causing a nasty four car crash that destroyed the No. 20 of Leilani Munter, the No. 34 of Jesse Iwuji and the No. 10 of Ed Pompa. Mrakovich has already had two awful races of note this year, being yanked out of the No. 28 Xfinity Series car at Bristol after wrecking two cars in practice and time trials, and proving to be a moving chicane in ARCA competition at Toledo a few weeks back. Between those performances and today’s debacle, it may be time to revisit licensing for this Pennsylvania driver.

Yes, what went down Friday was completely within the rules, and the No. 25 team shouldn’t be faulted for executing its plan. But the fact that Natalie Decker was allowed to be behind the wheel under green for a couple hundred yards, only to have ARCA and XFINITY Series veteran Brennan Poole run the ensuing 79.9 laps, score a top-10 finish and contend for a race win, and then take enough points from Poole’s drive to maintain a top five position in the ARCA standings really undermines the championship points race. Looking at the performance of Venturini Motorsports at Pocono today (no drivers other than Poole scored top-10 finishes), it’s a reasonable conclusion that Decker scored points she may have been unable to earn by having Poole driving on Friday. And while at day’s end Poole dropped in the closing laps from a podium to an eighth-place finish, Poole’s efforts should not be aiding others in the final point standings.

And while this particular instance is unlikely to impact the title chase at large, ARCA has seen how dangerous this can be in the past; rewind back to 2009, where road racing specialist Colin Braun relived Ricky Stenhouse Jr. three laps into a 48-lap event and delivered a runner-up finish for Stenhouse in his No. 99 car. Had Stenhouse not gotten into a battering ram battle with Scott Speed in that season’s finale race at Toledo, the math was there for Braun’s road racing ability to have scored Stenhouse an ARCA Racing Series title. I don’t care how old the rules are regarding relief drivers, that’s as dangerous to the integrity of a driver’s championship as any playoff system NASCAR can devise.

Well if only all this were true. Tony Mrakovich didn’t wreck two cars at Bristol not to mention he ran 13th at Toledo without any nicks on the car, when the number 12,32,15 and many others crashed out. Why not mention in his first Xfinity ride at Richmond he was up to 13th place and do to no cautions in the last 90 laps his rubber wore out and he finish 24th, better than all his Roush teammates. And not interviewing team owner of the 11 to find out that the crew chief went the wrong way on the track bar adjustment at Pocono and loosened Tony up even more is terrible journalism! Watch him at the next home game and eat your words.

By the way Tony Mrakovich drove car#10 at Toledo not car#11 in case you didn’t know.