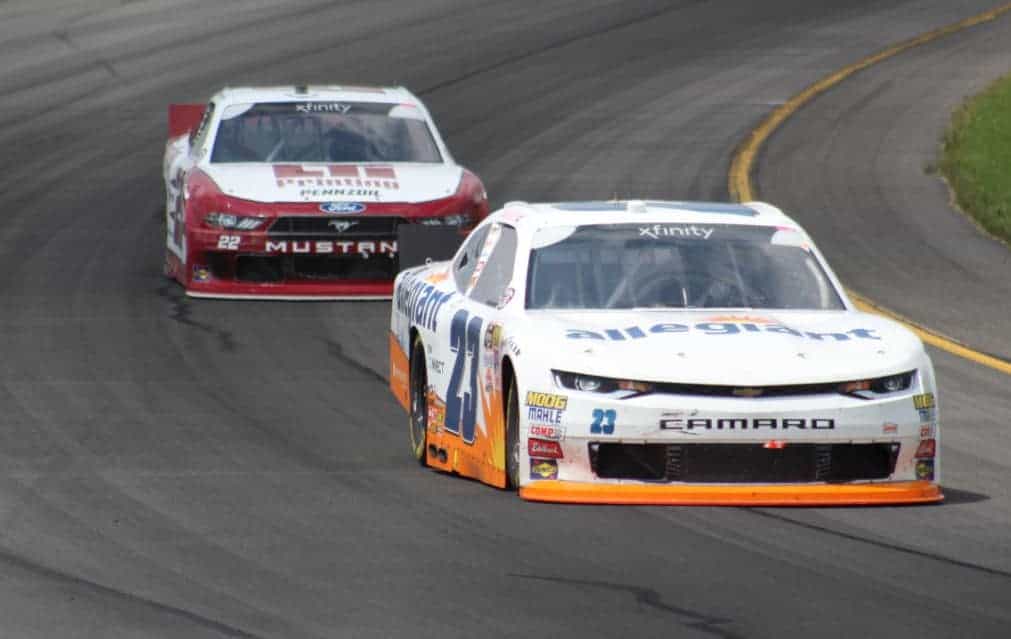 Saturday’s Pocono Green 250 at Pocono Raceway was only Chase Elliott’s second XFINITY Series start in nearly two years. And it almost ended in Victory Lane for a team which was hit a curveball in the month of May.

When Spencer Gallagher faced suspension from the sport due to drug violation, GMS Racing’s No. 23 team was put into question as to who would take driving duty until Gallagher’s return. And following Johnny Sauter‘s Dover start, Elliott has become the team’s next man, slated to run six races this summer for the Chevy camp.

Just two races in, Elliott gave the team a second-place finish, which was only its third-ever top-five finish in XFINITY history.

“Today was kind of similar to last week,” Elliott said. “By the end of a run I felt I could get close to Kyle [Busch’s] pace but I don’t think I could’ve run him down while in his draft.”

Busch had the dominant car throughout the 100-lapper, leading 64 laps and beating Elliott to the line by 2.852 seconds.

“There was a point he had a penalty and was coming back through the field,” he said of Busch. “I got in his draft and was able to keep up with him and actually thought I’d be in a good spot by the end of the run because I thought my car drove better than his.”

Running the restrictor plate package for the first time in the XFINITY Series, Elliott quickly got a feel for how you could race through the three unique corners.

“There was a balance to figure out how much speed you wanted to give away for balance,” he said. “We edged more on the driving-good side.”

Nothing kept Elliott from making aggressive moves on restarts. That same aggression powered him by Daniel Hemric to take second place in the final laps.

“You have to have those opportunities to make aggressive moves,” he said. “Luckily, my car drove pretty good and drove better than most. That allowed me to do more things.”

Despite the strong day, Elliott feels the package wasn’t a “perfect fit” to Pocono’s track surface.

“You’re still lifting a fair amount,” he said. “You have to be wide open with a fair amount of confidence. Today, we were too close to that border lien to be the pack race we were shooting for.

“It was a good day but not good enough.”

Running on Saturdays for GMS has given Elliott something more to drive alongside his full-time Monster Energy NASCAR Cup Series duties for Hendrick Motorsports. Contending for the win only makes it better.

“If you run on Saturday, it’s more for fun,” he said. “It’s something to go drive. I frankly don’t have a lot of opportunities to drive other things. Not the greatest circumstances but for me, when you can, might as well go racing on Saturdays.”