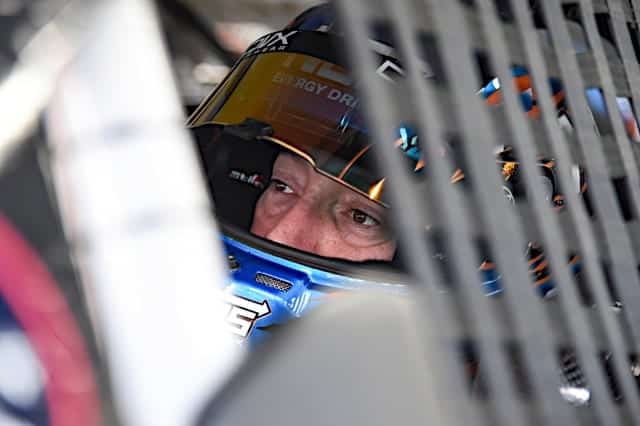 A new, experimental plate racing package. A pit road penalty for speeding. Kyle Busch had a number of obstacles thrown his way at Pocono Raceway.

None of them stopped him.

Busch earned his 92nd career NASCAR XFINITY Series victory with relative ease Saturday (June 2) cruising to victory in the Pocono Green 250. He won by 2.852 seconds over Chase Elliott, holding a steady lead up front for most of the race’s final stage.

“This car was on rails this week,” Busch said afterward. He quickly climbed back to the front from outside the top 20 following a stage one speeding penalty.

“I didn’t think I sped,” he said after the call wiped out what had been a 7.1-second, dominant stage one victory. “I didn’t even see any of our top indicating lights that we were speeding. But I knew we had the speed to get back up there.”

Slicing through the field despite the limited horsepower, Busch was back inside the top five by the conclusion of stage two. And by lap 61? He was up to the lead, a position he wouldn’t relinquish the rest of the day.

Late charges from XFINITY regulars, as they have so often during Busch’s career, fell short. Among them was Daniel Hemric, who ran third after losing a great side-by-side battle with Elliott down the stretch. Austin Cindric was a career-best fourth while pole sitter Cole Custer rounded out the top five.

The race also featured that experimental restrictor plate package last used at Indianapolis last summer. It produced mixed results at Pocono, a wild finish to stage two combined with Busch pulling away and drivers claiming it was tough to pass.

“I’m not sure it’s the right fit for this racetrack,” Elliott said after the event. “You’re still lifting a fair amount. So it’s a fine line of how you want your car to drive. It’s how much speed did you want to give away for balance.”

The plates did lead to some wild action on Pocono restarts and a few wrecks which claimed top contenders. Chase Briscoe’s car was damaged when Michael Annett drifted up into the wall off the tunnel turn while a later incident ended the days of both Christopher Bell and Justin Allgaier.

So tired of picking @J_Allgaier up in the infield care center ?? RT @NASCARONFOX: Trouble in Pocono! Christopher Bell and Justin Allgaier pick up damage. Here's what happened: pic.twitter.com/kYj1hrEn0o

“We were just victims of Pocono restarts,” said Bell, who ran second to Busch for much of the first stage. “This place has such a wide front straightaway and this place gets such big draft runs. I just got bottled up on the long pond straightaway there. Kyle was in another zip code but I felt we were the next bunch of cars.”

Much of the race saw drivers feeling out the package, leading to a wild pendulum of action. The end of stage two, for example, featured a frantic battle for the win where Paul Menard passed Custer on the final lap. The top four drivers raced two-by-two, in formation, an ending not seen often during Pocono’s long history on tour.

But when Busch was up front, parts of the race still saw single-file action throughout the field. The drivers lifting off the throttle did enough to bring separation amongst the front-running cars.

“From my vantage point,” Busch said. “I thought there was enough off throttle time that drivers made a difference. It didn’t take the leader and bring him back to the pack.

“You can run whatever package you want to run, as long as you have the opportunity to be faster than the rest. This is supposed to be a competition.”

Busch then referred to a Michigan plate race package as “boring as shit” before leaving the podium.

Elliott Sadler, who had a solid top-10 effort retains a 62-point lead over Custer in the point standings.

UPDATE: Kyle Busch failed post-race inspection for his car being too high in the left front, a NASCAR spokesperson claimed to MRN Radio. Any potential penalties will be announced this week by NASCAR but similar issues this year have resulted in fines, loss of points and crew chief suspensions.

Roflmao!! What a joke. Too high?! That’s a disadvantage Incase any of u were wondering. ??‍♂️ https://t.co/hlC3vDRdgb

If there is a time and a place to make an example out of somebody it is here.
Cup Guy plays in the JV game and has to cheat to win.
Typical XFINITY recap where the Cup Guy has all sorts of fake adversity to overcome and pull off a heroic win.

If anybody should be penalized for cheating, it is NASCAR using this horse-manure restrictor plate package.

This is why I have all but completely abandoned the Xfinity series… cup drivers with more experience and more funding than half the field combined making a mockery of the races. Did anyone other than the most rabid Kyle Busch fan actually enjoy that farce? I’m a Keselowski fan, but I hate it just as much when he runs away with Xfinity races. These days I record the race and when it’s over I read about it online. If a cup driver wins, I fast-forward though the entire race and just watch the last 10 or so laps. And sometimes I don’t even bother with that. This has been going on way too long, and I for one am just fed up with it.

Once again cup drivers drop down to the Xfinity series and make a mockery of the race. The jokes on NASCAR. Not many viewers watch it. I check in a couple of times, then checked out quickly. Same old crap.