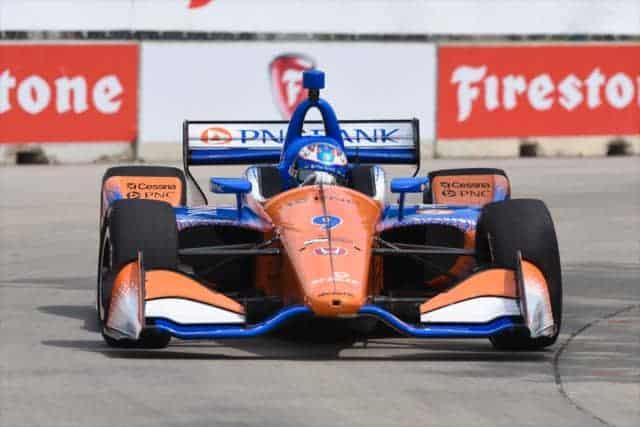 Honda came into Chevrolet’s backyard and completely dominated Saturday’s first of two races at The Raceway at Belle Isle. The Hondas of Scott Dixon and Ryan Hunter-Reay battled for the victory in the end with Dixon holding off Hunter-Reay for his 42nd career victory.

With the victory, Dixon moves into third on the all-time wins list tying Michael Andretti. The victory didn’t come easy for Dixon, but with a combination of fast pit stops and flawless restarts, no one could touch the No. 9 PNC Bank Honda.

Marco Andretti led the field to green for the first time since Pocono in 2013. Andretti dominated much of the opening stage of the race but when it came to the first pit stop of the afternoon, Dixon took the lead by virtue of coming in a lap later.

The first full-course caution would come out as contender Graham Rahal nailed the outside wall after putting right-front tires on the curb in Turn 13. Rahal was running inside the top five at the time of the incident and finished 23rd.

Both Dixon and Hunter-Reay had a solid restart with Hunter-Reay keeping the No. 9 in his sights. As laps began clicking away, Hunter-Reay continued to look at the rear PNC Bank logo on Dixon’s Honda and he couldn’t make any moves toward the lead.

With 15 laps remaining, Santino Ferrucci got spun by Charlie Kimball. The contact sent Ferrucci over the curbing and into the tire barrier, ending the rookie’s debut in the Verizon IndyCar Series. A few laps later, Kimball received a penalty for avoidable contact.

Dixon nailed another flawless restart and ran away with the victory, his first since Road America last June.

Hunter-Reay ended up second while Alexander Rossi took the final step of the podium. Pole-sitter Marco Andretti finished the race in fourth while Takuma Sato rounded out the top five. The best finishing Chevrolet would be Indianapolis 500 winner Will Power, who finished seventh.

Rossi takes back the point lead while Dixon moves up to second with the victory. After taking the points lead following the Indianapolis 500, Power falls to third. Josef Newgarden is now fourth in points while Hunter-Reay rounds out the top five.

Drivers like Power, Newgarden, Rahal and others all have another chance to have a good weekend in race No. 2 on Sunday (June 3). Chevrolet Dual in Detroit race No. 2 goes live on ABC at 3:30 p.m. ET.