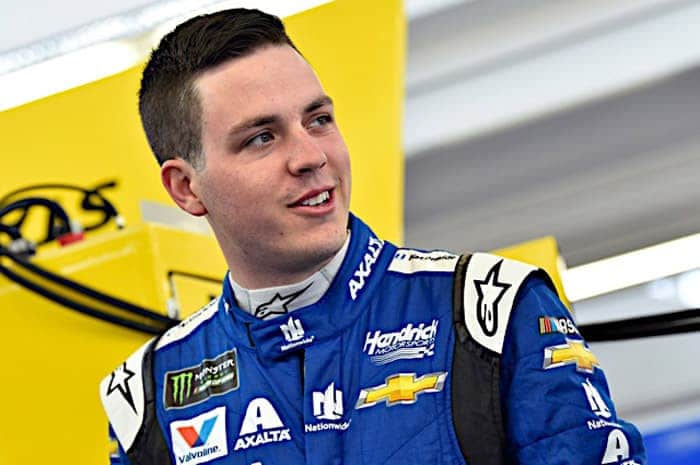 Joe Gibbs Racing’s Denny Hamlin and Hendrick Motorsports’ Alex Bowman both had good runs going Sunday (June 3) at Pocono Raceway.  The two drivers were battling for 11th with 14 laps to go in the Pocono 400 when Hamlin appeared to clip the apron in Turn 1.  As a result, Hamlin got loose and washed up the track.  Bowman just so happened to be there and took a hit to the left rear from Hamlin.

Denny Hamlin and Alex Bowman get together late in Pocono! pic.twitter.com/HRbzaCMN83

Hamlin spun and nosed into the inside wall, significantly damaging the front end of his Toyota.  Bowman tried to correct his slide but ended up hitting the outside wall with the right rear corner.

After the crash, Hamlin drove his FedEx Express Toyota back around to pit road, but the No. 11 crew determined that the car was too damaged to continue.  He ended up 35th in only his second DNF this season.

Hamlin then exited his car and took the mandatory ride to the infield care center, where he was checked and released.  When approached for interviews afterward, Hamlin respectfully declined comment.

Bowman was more dejected than anything after the race but considered the situation to be blameless.

“I think [Hamlin] just got loose,” Bowman told Frontstretch after the race.   “I wasn’t on his door too tight.  Racing hard towards the end, I think that was just a racing deal.  It’s a bummer, but stuff happens.  It’s a part of racing.  Sucks we didn’t get the finish that we deserved.”

Bowman described the car as “killed” after hitting the wall.  From there, all he could do was “putt around” for the remainder of the race.  He ultimately finished 27th as the last car on the lead lap.

For Hamlin, the crash drops him from a tie for sixth to eighth in points.  Bowman drops from 14th to 16th in the standings; he’s now outside of NASCAR playoff position. Ricky Stenhouse Jr. slid into his spot.

You would think that “most popular” was still driving 88. Different driver, same results.

Bowman will be the first Hendrik driver to break thru for a win. He’s that good.