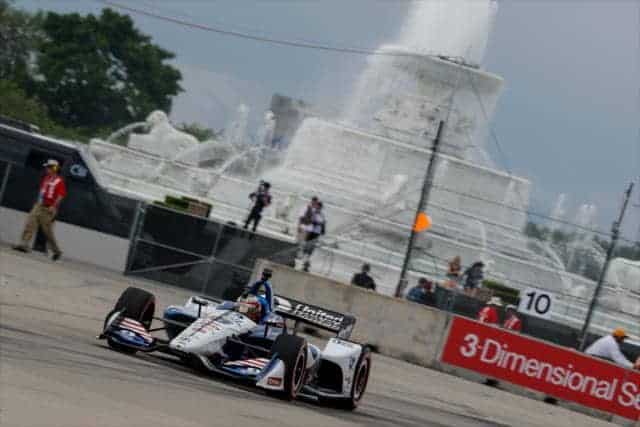 IndyCar can do it, why not NASCAR? (Photo: Joe Skibinski/IndyCar)

Graham Rahal started off with a strong afternoon Saturday until lap 46 when he nailed the outside wall exiting Turn 13. A hard impact ended Rahal’s bid for a podium finish and relegated him to his first last-place finish since the 2015 edition of this race.

In 183 starts in the Verizon IndyCar Series, Rahal has only finished last seven times in his career.

Following a 10th-place finish last weekend at Indianapolis, Rahal remained sixth in the points standings. He falls from sixth to seventh after the 23rd-place finish in the first of two races in Detroit.

Other than Saturday, Rahal hasn’t finished outside the top 10 all season long. He even secured a podium finish in the season-opening race at St. Petersburg.

“I’m OK,” said Rahal. “It was about the worst hit you could take around here. I think the car did its job. Obviously, we were going to finish third, at worst, and it looks like a lot of our competitors are struggling today. I’m disappointed in myself. We’ve got to go back and look at what happened. I just lost it before I even really turned in. I don’t really know what happened. It was shaping up pretty good for the United Rentals team so it’s disappointing.”

The last time Rahal finished last, he followed up the next day with a third-place finish. It’s one of the positives about the race weekend in Detroit. Rather than waiting for the next weekend, or several weeks, a driver has the opportunity to rebound from the previous day’s performance. It’s unknown at this time on whether the team will repair the primary car or roll out the backup car.