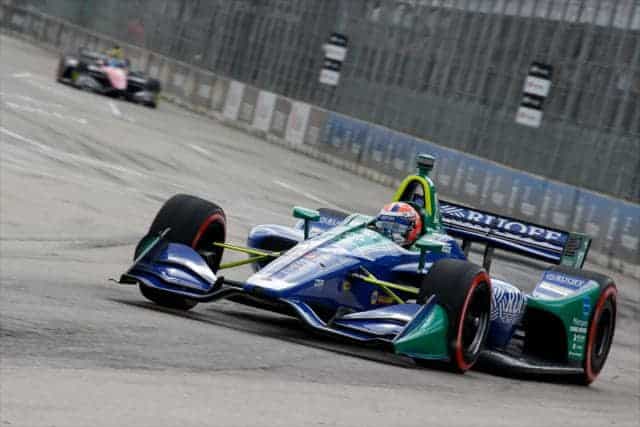 Alexander Rossi entered Sunday’s race as the points leader following a third-place finish on Saturday. The afternoon started off every way it needed to in order for Rossi to leave Detroit with the points lead.

He led the most laps, started on the pole, and just like that, it was all gone. An issue that hadn’t been seen in both races happened twice to the No. 27 Ruoff Mortgage Honda, with the second time costing him the victory.

“It was a pretty disappointing day considering we led the most laps and started on pole,” said Rossi. “For sure we didn’t have the pace for Ryan (Hunter-Reay) – he was just on another level. So hats off to him and the DHL team, they certainly deserved to win. But the Ruoff Home Mortgage car definitely had a second-place finish in it.”

As Rossi entered Turn 3, with Hunter-Reay not far behind, his car missed the corner in what looked like brake lockup. The mishap handed the victory to Hunter-Reay.

“Unfortunately, with less than 10 laps to go, our luck changed,” he said. “We’re not really sure what happened, we’re going to investigate to see if something went wrong because it was a very abnormal issue to have when we hadn’t experienced anything remotely similar all weekend.”

The two times Rossi flatspotted the tires finally caught up to the car, and he ultimately lost a left front tire. When that happened, his day went from bad to worse and he ended up 12th. Everything that Rossi had gained in points suddenly went out the window. He now leaves Detroit third in points, 11 points out of first.