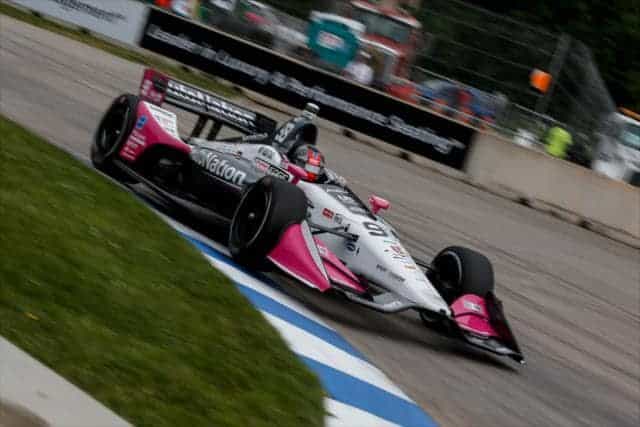 Following a 12th-place finish in the Indianapolis 500, Marco Andretti came to The Raceway at Belle Isle looking to continue his solid 2018 campaign. A roller coaster season so far earned its apex moment on Saturday during qualifying. Andretti turned a super fast lap, earning his first pole since Pocono in 2013.

Andretti led a season-high 22 laps, his first since Pocono last August. After the first stop, his car just wasn’t as good as it was during the first stint, though, and he had to settle with a fourth-place finish. It was his best result since he ended up fourth last season in Toronto. Despite not earning the victory, he was rather close to earning his first podium finish since he finished third at California in 2013.

“You hate to go backward,” said Andretti. “We definitely wanted another trophy. I haven’t had a podium in while and that’s been getting to me, let alone the win. We’ll do some homework tonight on how we can improve on the race today and do better tomorrow. We want to get the pole tomorrow.”

The fourth-place finish Andretti earned on Saturday is now his best at Belle Isle. His previous best was a fifth-place finish in race No. 2 in 2015. On Sunday, Andretti will look to improve on that performance. Much like Andretti’s teammate Alexander Rossi did in the Indianapolis G.P, the team will go through and look at the setups used by the team during Saturday’s race and look for any space for improvement.

Along with looking to improve finishing position from Saturday’s race, Andretti will also look to make a few more gains in the points standings. With his fourth-place, Andretti moved from 11th to ninth in IndyCar Series points. He is currently 101 points off of points leader and teammate Rossi.