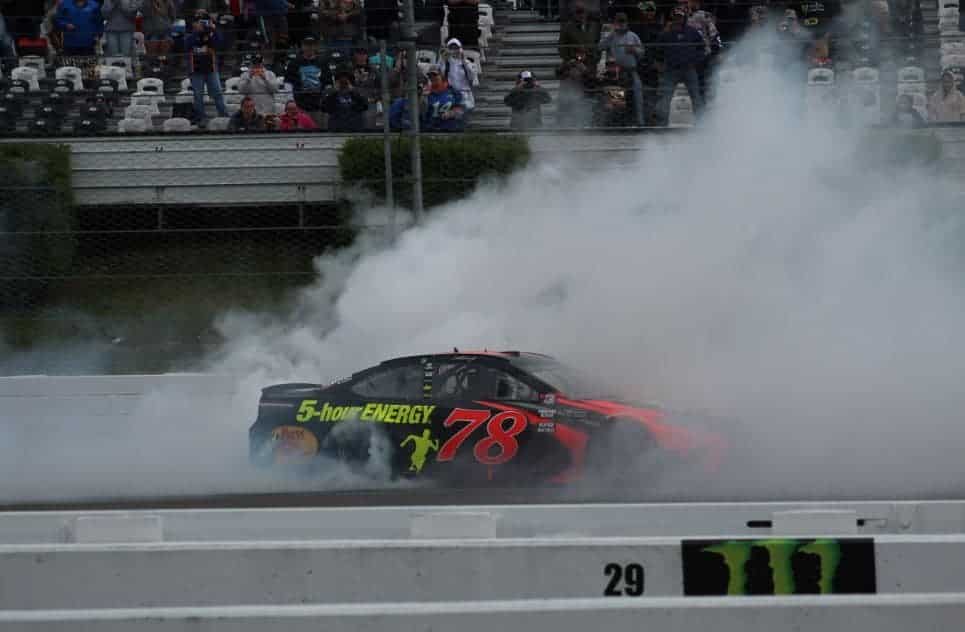 The talk heading to Pocono Raceway concerned the dominance this season of both Kyle Busch and Kevin Harvick. Reigning champion Martin Truex Jr. was a bit of an afterthought.

Truex fought back from a bad pit stop after winning stage one, roaring back to take his second win of the season in Sunday’s (June 3) Pocono 400. Truex survived three restarts in the final 20 laps after Busch handed him the lead by pitting under yellow with 20 laps to go.

Busch’s decision for fresh rubber never panned out; he restarted eighth and could only make it back to third place. Boosted by clean air, Truex was able to surge ahead and fended off a late charge by Kyle Larson on the final restart.

“Honestly, we were all equal,” Truex said after the race. “It was just a matter of who could get out front. Cole (Pearn, crew chief) made a good call to stay out, and once we got in clean air, this thing was a rocket ship.”

Larson made a valiant effort, getting to the bumper of the No. 78 Toyota entering Turn 1 with seven laps to go. But Truex came down to block, Larson didn’t have the handling to push to his inside and Chevy saw its winless streak tick up to 13 races.

It was a great recovery by the No. 78 team after the jack fell off the left side during a pit stop on lap 54. Truex dropped to 14th and was forced to pick his way back through the field, working to fourth by the end of stage two. The No. 78 team then caught a break with its decision to stay out once the No. 18 came down pit road.

“It’s pretty much a coin flip, really when it came down to it,” said Pearn. “Once the No. 18 ducked off, I thought our best odds were to do something different and obviously, it worked out.”

Busch, the third-place finisher felt like a debris caution on lap 140 changed the game. A crush panel was hit by several cars entering turn 1 before NASCAR threw the yellow with Busch leading and in position to earn his second straight victory.

“They threw another debris caution for what looked like a shoe booty in turn 1,” Busch claimed. “We lost this race last year on not pitting in that situation and getting beat by tires. So we pitted this year for tires and got beat by those who didn’t pit.”

Kevin Harvick ran fourth after leading the most laps (89) and dominating most of the day. But after getting beat by the No. 18 during a yellow-flag stop on lap 127 the No. 4 team got stuck in traffic.

“Lost control of the race,” Harvick said. “Wound up losing a couple more spots on the restart starting on the inside, and that was the end of the day.”

A relatively clean race that went caution free outside of stage breaks for the first 125 laps incurred four yellow flags the rest of the way. Joe Gibbs Racing suffered the worst with the field getting bunched up; Busch lost the lead through pit strategy while both Denny Hamlin and Erik Jones got knocked out in late-race wrecks.

Denny Hamlin and Alex Bowman get together late in Pocono! pic.twitter.com/HRbzaCMN83

Hamlin declined to comment on his incident which ruined both his day and the No. 88 of Alex Bowman. The two drivers had been racing hard before Hamlin lost it on the inside of Bowman coming out of turn 1.

Later, Jones got turned on the restart when Logano tried to sneak to his inside. The wreck pushed Jones back to 29th and dropped him to 14th in points, just 12 ahead of Bowman for the final spot. Ricky Stenhouse Jr. worked his way inside the top 16 due to Bowman’s misfortune.