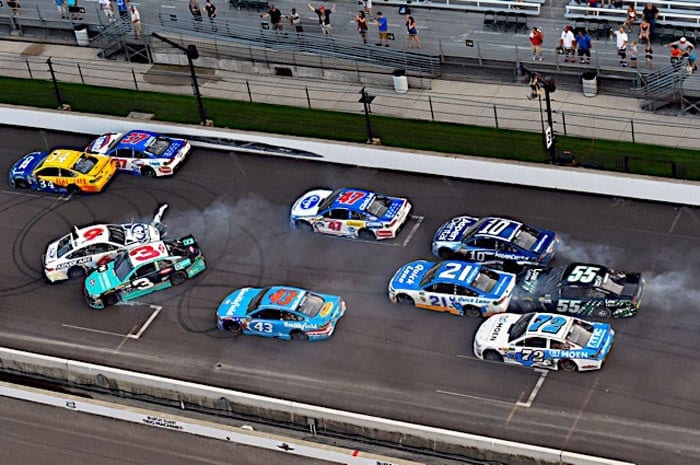 The NASCAR XFINITY Series used its experimental plate racing package for the first time since Indianapolis last summer. But after another dominant performance by Kyle Busch, both driver and fan reviews weren’t as strong as its opening act.

Saturday’s Pocono event (June 2) featured just seven lead changes among six drivers. Busch led for 64 of the 100 laps, a total that might have climbed to 98 if not for a pit road speeding penalty at the end of stage one.

Compare that to last July’s race at Indianapolis, a race that featured eight leaders and a track-high 16 lead changes over the same distance (100 laps.) The field up front was also less spread out for much of the day.

At the same time, without Busch in the picture, some of the Pocono competition was fast and furious. A crazy ending to stage two saw Paul Menard pull ahead of Cole Custer, drafting past on the final lap. That 25-lap stage saw four cars often nose-to-tail together in a tight Pocono draft.

But the difference in speed for that draft, some 10-15 mph, was noticeable enough to the naked eye. There were enough concerns that some, including Monster Energy NASCAR Cup Series regular Chase Elliott, felt that the package needed tweaking.

“I’m not sure it’s the right fit for this racetrack,” he said. “You’re still lifting a fair amount. So it’s a fine line of how you want your car to drive. It was how much speed you wanted to give away for balance.

“An A for effort, I guess. I think it’ll probably be pretty good next week at Michigan.”

Other drivers didn’t think handling really came into play at all. That led to the typical difficulty in passing we’ve seen with the current NASCAR package.

“It was more about momentum and track position,” added Matt Tifft. “Balance didn’t seem to be too big of a deal in today’s race.”

Driver skepticism was not shared by everyone. In particular, Busch felt the need to lift still allowed for driver skill to make a big difference. He called a potential Michigan plate race “boring as shit” while claiming there are limits to racing parity.

“I think this package was OK for giving an opportunity to make moves in some situations,” he said. “I thought there was enough off throttle time that drivers made a difference. It didn’t take the leader and bring him back to the pack. Guys got rewarded for being able to take care of their tire and their car. I feel like the best car won.

“You can run whatever package you want to run, as long as you have the opportunity to be faster than the rest. This is supposed to be a competition.”