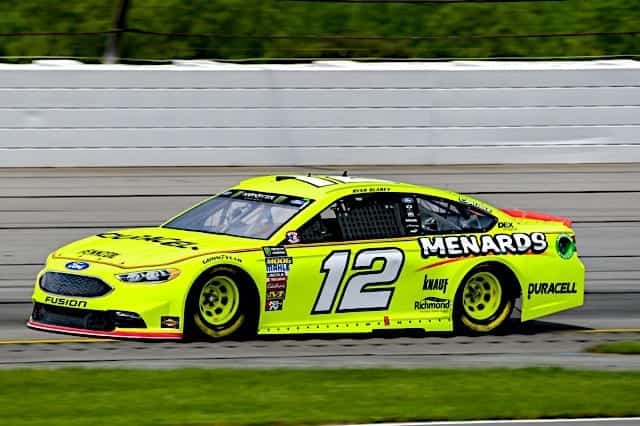 Ryan Blaney came into Sunday’s (June 3) Pocono 400 as the defending race winner. In qualifying Friday, he shot the No. 12 to the top of the leaderboard for his second pole of the season.

The race itself was a different story.

The No. 12 car jumped out to an early lead for the opening 11 circuits. But on Lap 12, Blaney was passed by Kevin Harvick for the top spot, followed by Kyle Busch and Martin Truex Jr., pushing the pole sitter back to fourth. Four laps later, crew chief Jeremy Bullins called Blaney to pit road to service the ill-handling No. 12 car, which the duo hoped would propel them past the top three contenders.

“We were struggling at the time and we needed to get to pit road as soon as we could to fix it,” Blaney said after the race. “It cost us at the end of the first stage when we fell back hard because the tires were pretty old. But we wanted to come in and try to fix our car when our [pit] window opened.”

At the conclusion of the first stage, Blaney earned four points by finishing seventh. Stage two was much of the same, going caution free, but the No. 12 fell back to eighth, earning just three stage points.

That’s about where he was when, with 21 laps to go, a piece of debris off Daniel Suarez‘s battered machine caused a caution. Blaney brought the No. 12 car down pit road for two tires, exiting the pits first and restarting fifth.

Over the final 13 circuits, Blaney had to deal with a pair of restarts that shuffled him back to sixth, where he remained when the checkered flag flew. It’s his best result since a fifth-place effort at Texas Motor Speedway in early April. But considering where he ended this race last year (Victory Lane) it was a disappointment for a young talent who expected more.

Blaney came into Pocono with back-to-back DNFs. He crashed out at Kansas Speedway, finishing 37th and last weekend at the Coca-Cola 600, the No. 12 was engulfed in flames during the third stage, resulting in a 36th-place effort.

NASCAR takes to the high banks of Michigan International Speedway next weekend. That’s a track where Blaney has a best finish of fourth in 2016. The third-year driver is excited about heading to the two-mile oval.

“Hopefully, we can take a lot from this weekend,” Blaney explained. “I thought we lacked a little bit of overall speed from what we’ve been the last couple of races. But Michigan has been a pretty good track for us, so hopefully we can go up there and have a better run.”