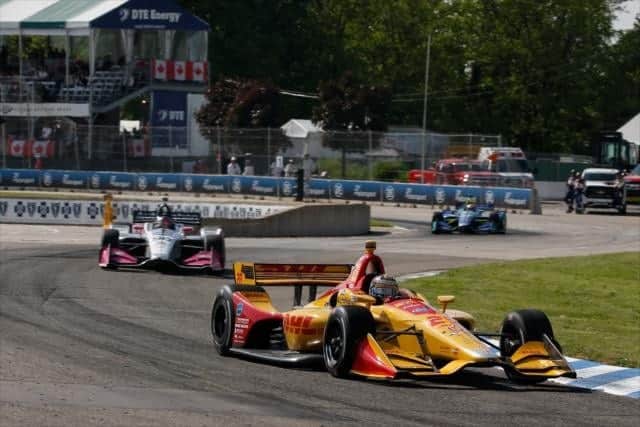 For the second straight day, Honda came into Chevrolet’s backyard and completely dominated. The Hondas of Alexander Rossi and Ryan Hunter-Reay battled for the victory. Rossi had outright dominated the afternoon, but in the end it didn’t matter, as one mistake in Turn 3 cost Rossi the lead and a spot on the podium.

Oh no!? There goes Rossi’s front left ⚫ tire.@RyanHunterReay to ? P1!

Hunter-Reay then coasted to the victory as he had a more than 16-second lead over Will Power, who retook the point lead after losing it in Saturday’s race, after Rossi dropped back. The win marks his first since tragedy struck the IndyCar Series at Pocono Raceway in 2015. Ed Jones ended up third, while Saturday winner Scott Dixon finished fourth. Graham Rahal rounded out the top five.

The day started off strangely as Rossi took the pole position under wet conditions, giving the first look at Firestone’s new rain tire. He led the field off of pit road, but it was quite a while before the field took the green flag.

General Motors product development head Mark Reuss lost control of the 2019 Corvette ZR1 pace car, resulting in the car making hard contact with the wall in Turn 2. Both IndyCar official and Reuss were checked and released from the infield care center, though Reuss declined to comment.

Chevrolet later released a statement about the incident.

“We are thankful that there were no serious injuries. Both the pace car driver and the series official were taken to the infield care center, where they were checked, cleared and released. It is unfortunate that this incident happened. Many factors contributed, including weather and track conditions. The car’s safety systems performed as expected.”

Rossi appeared unbeatable throughout the race, and other than Hunter-Reay and Rossi, Robert Wickens was the only other driver to lead a lap during Sunday’s event. In the end, Hunter-Reay came off pit road during his final stop between Rossi and Will Power. As the laps wound down, Hunter-Reay began chopping away at Rossi’s lead.

As the laps wound down, Hunter-Reay knocked a nearly eight-second lead down to under two seconds, and the two ran 1-2 in nearly identical tire tracks. After locking up his tires heading into Turn 3, Rossi did the same thing the next time by but missed the corner completely, running off of the track and surrendering the lead.

With the checkered flag, ABC’s coverage of the Verizon IndyCar Series has also taken the checkered flag as Sunday’s race was the final one on the network. NBC now takes over the coverage with the remainder of this season’s races being on NBCSN.

To the ABC team, a job well done.

We'll take it from here. For the rest of 2018 and beyond, @NBCSports is your EXCLUSIVE home for the @IndyCar Series! pic.twitter.com/AnEDA0w0Wf

The Verizon IndyCar Series goes from the road course at Belle Isle to the 1.5-mile Texas Motor Speedway next Saturday night for the DXC Technology 600. The race goes live on NBCSN at 8 p.m. ET