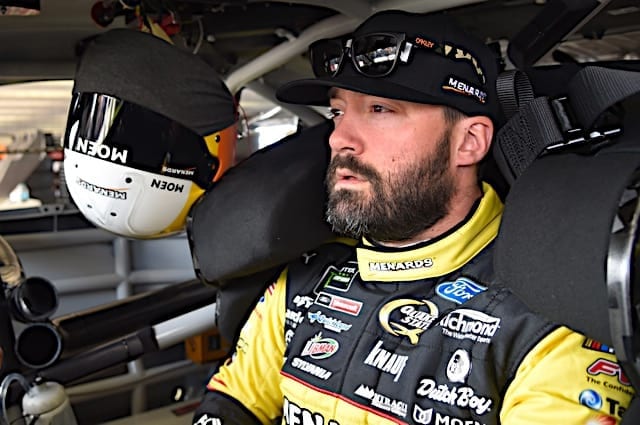 Start in the back half of the field, activate stealth mode, finish inside the top 10. This week, not just one but two drivers accomplished that particular feat.

Aric Almirola started 34th and looked to have a long day ahead of him. But smart strategy and hard racing got him all the way to seventh by the end, his sixth top 10 of the year.

Meanwhile, Paul Menard kicked off the day in 20th but ended it in 10th, gaining ten spots for his third top 10 of the year.  Top-10 finishes might not be glamorous, but they’re worth points and they’re a stepping stone to more.  Overcoming a poor qualifying effort is not always an easy feat, either, so credit where it’s due for this pair at Pocono.

There may not have been a lot of fanfare for either driver, but Pocono is the kind of race people look at as a turning point as the start of NASCAR’s second half. Might it be for these two? Almirola is looking to win while Menard is looking to surge back into playoff contention.

It was a little bit of the same old, same old this weekend. Aerodynamic dependence was on full display, the Chevrolet camp was still struggling to catch up (imagine Kyle Larson if the cars were better) and the Kevin Harvick / Kyle Busch combo were frontrunners most of the day.

On the other hand, Pocono was an authentic race.  Teams played different pit strategies, the cautions were not contrived (even the debris was real) and the race was won by a team’s late-race decision to stay out under caution.

Sure, it wasn’t as exciting as some recent races have been. But it was real, and it played out that way.  The fastest car probably didn’t win, as so often happens at Pocono, and it wasn’t a terrible way to kick off summer. A lot of fans might say it is, but if they do? Those who have asked for authenticity shouldn’t be among them.

Does NASCAR need to keep working on solutions to make the racing better for fans? Of course. But sometimes, letting a race play out means it won’t be the most spectacular event. That’s been true for years.

Truex hasn’t enjoyed the week-in-and-week-out success that he did in 2017. Instead, he’s been overshadowed a bit by both Harvick and Busch. But he is fourth in driver points and has nine top-five finishes in 14 races. Certainly, the reigning champ’s been there most weeks, he just hasn’t dominated the conversation.

Why?  The No. 78 team has struggled on pit road compared to the competition. There’s also more serious speed at the front of the field from the Ford camp.

BOWLES: CAN TRUEX CONTEND WITH HARVICK AND BUSCH?

Truex got it done at Pocono, though. He gambled on a late caution and stayed on track, a strategy that flopped for Harvick, who faded to fourth despite leading the most laps.  Truex ran with the frontrunners all day long, qualifying inside the top five, and made everything work at the end to score his second win of the season.

When… will it be time for NASCAR to get serious?

After a successful run at Indianapolis last year, NASCAR rolled out the high downforce/low horsepower package for its XFINITY Series cars at Pocono this weekend and it didn’t work.  Why?  Simply put, Pocono doesn’t race like Indianapolis and expecting cars and drivers to react the same was off base.

So should NASCAR give up on the package?  Absolutely not. It has worked well at Indy and for the Monster Energy NASCAR Cup Series cars at Charlotte. We’ll see next week how it works for the XFINITY cars at Michigan. NASCAR has said they may try the package at the Cup level this season and Indy is a good choice. The playoff field will be all but set by that point and they know it worked well there for the XFINITY cars.

But there needs to be more done than just this one package. Pocono this weekend made that readily apparent.

So, what next?  Too many different packages would be detrimental, far too costly for many teams and unrealistic for those preparing cars ahead of time.  But why not run a series of tests as soon as the season is over, trying a few different things? How about a high-downforce package with higher horsepower (circa 2015 or so) engines, a smaller engine that can run unrestricted with the high-downforce cars, and a much higher ride height and valance package.  Heck, even try a non-radial tire (bias-ply is old school but the racing changed with the switch to radials. It’s worth a look, isn’t it?)

Yes, that’s a bit like throwing stuff at the wall and seeing what sticks. But without trying all the possibilities, you’re leaving quality competition on the table somewhere.  And what if a major adjustment does stick? It will have been worth the effort.

Why… didn’t lap leader Kevin Harvick pull it off?

Harvick led more than half the race, 89 laps, and for most of the day, it looked as though he had the car to beat… again.  There’s no question Harvick and Co. have made their Fords work for them this season, but they just couldn’t make it work at Pocono.

First, Harvick lost the lead on a round of pit stops after a spinning Derrike Cope brought out a caution with just under 35 laps to go.  Kyle Busch beat him off pit road with a stellar stop by the No. 18 crew. At that point in the race, the two were running nearly identical lap times, so Harvick couldn’t quite close the gap.

Then, with 21 to go, Harvick and Truex stayed on track while most of the leaders came to pit road once the caution flew again for a piece of metal on the track.  It worked for Truex, but Harvick? Not so much, as the No. 4 faded to fourth place. Pocono is one of just two active tracks where Harvick has not won, so it’s a box he’ll be gunning to tick off when the series returns in August.

How… many different winners are we going to see this season?

After two seasons that featured several different winners, 2018 has been the year of the repeats— just six drivers have visited Victory Lane in 14 races this year. Last season, there were already 10 different victors through this point, with nine in 2016.  Overall, there were 13 winners in 2016 and 15 last year. This time around, though Kevin Harvick and Kyle Busch have been so dominant they look like they could easily win a few more apiece before the playoffs, showing no sign of slowing down anytime soon.

With 12 races before the playoff picture is set, we’ll see a handful of others join them. With Daytona and the two summer road courses in the mix, there’s still a chance for some major surprises. But overall, don’t be surprised if just 10 or 11 drivers punch their playoff tickets with a win.

Larson is running too well to not win at some point, as is Brad Keselowski. If his team can put a capable car underneath him, Jimmie Johnson will find a way to win with it. Beyond that, though it’s hard to look at any team and say a win looks imminent.

Even with a surprise at Daytona (my pick there would be Almirola) and the road courses, that would bring the total to 11 before the playoffs. While there’s nothing wrong with a driver or two having dominant seasons, it does make the postseason picture seem a little thin if a system based on winning sets two-thirds of the field on points.  Of course, it could all turn around next week, but this year just doesn’t feel like one where we’ll see 15 or more drivers pull a win out.

Another hater heard from!

Have to agree about the haters. Seems to be a sizable quantity of them around these days.
Funny how many dis Toyota as a foreign brand, yet want Dodge back in even though its owned by Fiat.

“When will NASCAR get serious?” Seriously, Amy? You believe changing the rules mid-season is “getting serious?” It’s OK to experiment in Xfinity, because that’s part of its reason for being. But it’s very hard to take any sport seriously when they change the rules in the middle of the game. And you want to do it during some drivers’ last chance race to make the playoffs.

And why do that when NASCAR went back to its tried and true method of creating late-race excitement with the fake debris caution? The only entertainment value in this sport is watching how NASCAR will shoot itself in the foot from week to week, with the full approval of the paid media shills.

has nothing to do with toyota being foreign they price everybody out of the game TRD builds all engines for teams ,they made air gun controlled. SHR A chevy guy to ford to complete. pit personal regulated , talk now about spending caps . truck series to spec engines except one. and more to come………..

LOL about t g e comments on Toyota. It was the RTA that wan t ed the pit gun. A nb d look where all the Ford engines come from, a b d tell me t g e re is a difference. Lastly the spec enine for truc k s l If it weren’t for Toyota there wouldn’t e c en be a truck series.

you made my point !