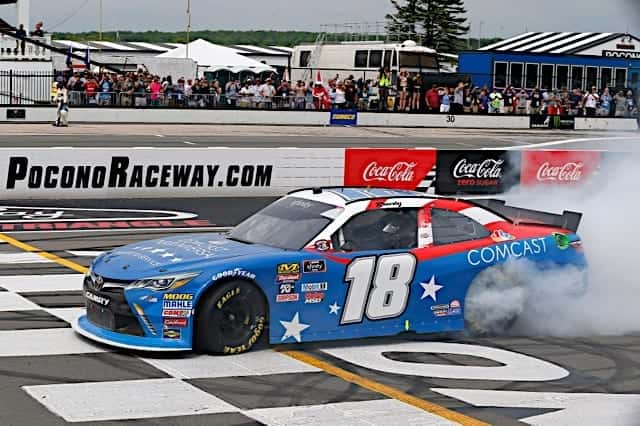 Busch started the day in the fourth position, but rocketed to the lead, winning the first stage by over seven seconds. When teams came into the pits to service their cars under caution, the No. 18 was too fast on pit road, sending him to the back. By the end of stage two, Busch raced his way to sixth.

During the final stage, Busch led most of the way, stretching the fuel to the finish, picking up his first win at Pocono in the XFINITY Series.

“It feels good for as good as our car was,” Busch said in Victory Lane. “I tried to screw it up again early this week. This car was on rails this week and last week, too. We were able to overcome our speeding issue we had this weekend to get back to the front.”

With the victory, Busch has won at all 15 tracks that the Cup XFINITY and Truck series go to.

Even though I am not a fan of the restrictor plate package because it takes control out of the drivers hands, the last two laps of stage two were incredible.

Custer dominated the stage and looked to be running toward a playoff point, until Paul Menard got a great run off Turn 3 coming to the white flag of the stage getting beside the No. 00 car. While those two battled, it allowed Cindric and Justin Allgaier to close in on the battle for the lead, putting four cars under a blanket on the final lap of the stage.

Exiting the Tunnel Turn, Menard got the advantage going on to win the stage, picking up a playoff point for the No. 22, which will be running for the owner’s championship come the playoffs.

The battle for the stage win allowed for the second group of cars to close in on the lead pack, including eventual race winner Busch, Elliott and John Hunter Nemechek, as all seven cars finished under 1.5 seconds of the lead.

That’s what NASCAR wanted when it implemented the plate package for Pocono and Michigan, as it looked a lot like the All-Star Race. However, the rest of the race was kind of a dud, though it did feature some decent battles throughout the field.

All eyes that were glued to either the television or those who actually attended the XFINITY race were wondering how the restrictor plate package was going to work out. I’ll be honest, it lived up to my expectations, and they were very low.

You see, Pocono is similar to Indianapolis, where NASCAR brought out this package with a bigger rear spoiler, massive air ducts and a restrictor plate on the carburetor to slow the cars down. Typically, teams that are fast at Pocono are fast at Indy, that’s always been the case. I would say that was also the case for Saturday’s XFINITY race.

The first stage of the race was an absolute joke. Hard to watch. Busch checked out to a seven-second lead with a restrictor plate, which is unreal. After the race, he, the race winner even said that the package was “boring as shit.”

Overall, the final two or three laps of the second stage may have saved the package a little bit. That was entertaining and looked like the All-Star Race, but if NASCAR is going to run the package, I don’t think Pocono was a good place for it.

At Indy, somehow, drivers were ballsy enough to run wide-open around the 2.5-mile track. But with Pocono’s unique layout, it didn’t allow for that, even though heading into opening practice on Friday many drivers thought they were going to be full throttle for the entire lap. After talking to Matt Tifft, Michael Annett and Ryan Sieg, they all said similar things about the package, you can’t run wide-open and the race was going to be different from Indy.

And that was proven in a pair of practice sessions on Friday. There wasn’t much passing, and single-car speeds were actually quicker than cars that drafted. That doesn’t make sense.

Some drivers didn’t understand it, while others know they need to adjust to it, as the package is returning next weekend.

“From lap 1 in practice, everybody was out of the gas a substantial amount,” runner-up finish Daniel Hemric said. “Some guys aborted from what you would call a trimmed out setup to more of a downforce setup. We never hit on anything that felt great. At the end of the day, I think because of the off-throttle time is why you didn’t see the same style of pack racing like you did at Indianapolis.”

“It feels like we’re crawling,” Ross Chastain said of the package. “You get to the center of the corner and you feel like you pick up speed. That’s where our car is so good, and we see that week in and week out.”

Hopefully, the racing next weekend at Michigan is better than Pocono, and I expect it to be. A lot of drivers expect it to be similar to Daytona, where there is three-wide racing around the racetrack.

On lap 60, two of Busch’s top competitors crashed out before entering the Tunnel Turn, which allowed the No. 18 car and the rest of the field ultimately save enough fuel to make it to the finish.

After a mix of pit strategy after a previous caution, Allgaier and Christopher Bell tangled, turning the No. 7 car into the outside wall, while the No. 20 smashed the outside wall.

Bell and Allgaier were in the middle of four-wide racing with Alex Labbe on the bottom and Dylan Lupton on top. Lupton said that Allgaier came across the nose of the No. 28 machine, which put Allgaier into the wall.

Four-wide racing leads to a crash on the restart. Heavy damage for @J_Allgaier & @CBellRacing. pic.twitter.com/ouidbWxnPd

“Just restarts at Pocono,” Bell said of the wreck. “It’s the bottom line. There was nothing I could have done there with Justin for that matter. We were just victims of Pocono restarts. It just got really hairy. It was exciting. That’s why sometimes we love it and sometimes we hate it.”

Bell finished the race in 36th, while Allgaier was 37th.

Chastain had three top-10 finishes this season, heading into Pocono, but Saturday was one of his best races of the season.

The No. 4 team turned a hot lap in qualifying, quick enough for ninth-fastest in the opening round. It was the first time this season that Chastain transferred to the final round. He started the 250-mile race in 12th.

Throughout the race, Chastain ran in the top 15, well ahead of his JD Motorsports teammates. At the conclusion of the first sage, he was 13th, and halfway through the event, he was 11th. During the final stage, he raced his way inside the top 10 before falling to 11th at the checkered flag, for his best finish at Pocono in three career starts.

“It was one of our best Saturdays for sure, to qualify as good as we did,” Chastain said of his race. “We threw a lot at it after practice, all good stuff obviously as it paid off in the race.”

Despite running just outside, and at times cracking the top 10, Chastain doesn’t believe this is his best race of the season. He has a pair of ninth-place finishes at Daytona and Bristol Motor Speedway, and he ended up 10th at Auto Club Speedway, where he thought his team executed the best.

“Same car as California and it runs good,” he said. “We have two like this, and we just brought the second one out last week for the first time and we’re starting to get these cars out on the track as much as we can. We’re working on our mechanical grip setup. California was still better for us, but I’m excited about next weekend with this package.”

The series heads to Michigan where Chastain has a best finish of 12th in four career XFINITY races at the track.

Busch cruised to the victory, edging out Elliott by more than 2.5 seconds. The No. 18 was the dominant car, while the No. 23 Chevrolet used fresher tires toward the end of the race to move up the leaderboard.

Custer is making his second career Cup start on Sunday, and started the XFINITY race from pole. The No. 00 ended the day in fifth.

Menard fell to eighth late in the going after winning the second stage over Custer in a side-by-side battle. Chastain finished 11th, while JJ Yeley came home 34th.

“It was awesome to be able to experience running up there against Chase Elliott and Kyle Busch and those guys. That is experience that I can’t give up. I gotta have more races like this and need to get some stage wins so that we can be comfortably competitive come the playoffs.” – Austin Cindric

“We just didn’t have really good long run speed. That was our biggest problem. We just got too tight at the end of a run. It was interesting to run the package and try to learn it throughout the day.” – Cole Custer

“Overall it was just a tough day. We ended up 13th which wasn’t bad considering we started so far off after qualifying 20th. Get out of here with as many points as possible and move on.” – Ryan Reed

Busch dominated this race from start to finish, even with a pit road speeding penalty following the conclusion of the first stage. It made the more race entertaining, specifically the second stage, which had a four-car battle for the stage win on the final lap.

Methodically, the No. 18 team made its way through the field to capture the lead on a lap 60 restart, leading the final 40 laps of the race. It’s almost as if Busch was toying with the rest of the field in order to pick up the victory at the Tricky Triangle.

Cindric had his best career XFINITY finish on Saturday, running in the top 10 for the majority of the event. It was the first time this season that he out-raced the No. 22 car for much of the race, even though Menard won the second stage.

The tested restrictor plate package led to a lot of strung out racing throughout the field and didn’t pan out as well as Indianapolis last season. Overall, a lot of the drivers are not in favor of it, or at least want it to be adjusted.

The XFINITY Series heads to Michigan International Speedway next Saturday (June 9) for the LTi Printing 250. It will be the second consecutive race that the series will use restrictor plates on a non-plate track. Denny Hamlin is the defending winner of the event, edging out William Byron at the finish line.

Between the 18 stinking up the competition, Fox’s love affair with the in-car camera, and Micheal Waltrip babbling like a grade schooler, I found the whole thing unwatchable and turned it off after having it in the background until partway into stage two.

I wouldn’t exactly put Chase in the same “interloper” category as Kyle Busch or Paul Menard, since he is only racing NXS as a substitute for Spencer Gallagher as a favor to his dad’s old crew chief Mike Beam.