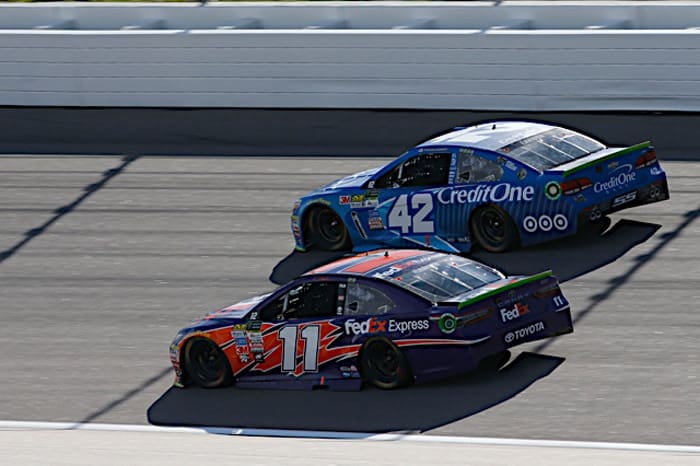 ONE: Who can challenge NASCAR’s big three?

Conventional wisdom — and dominant form on track — suggests Kevin Harvick, Kyle Busch and Martin Truex Jr. will be three of the four drivers that compete for a championship at Homestead-Miami Speedway on November 18, 2018. Of course, plenty can happen in the Monster Energy NASCAR Cup Series between now and then. There’s also those white-knuckle final 400 miles to crown a champion and there is, it’s worth noting, absolutely zero guarantee this trio will take the green flag in contention. But odds are you’ll have to go through this particular triumvirate (or some combination thereof) to get it done in the final race of the year and win the big prize.

The bigger question for me is who will step up and be the fourth? Which driver will find form or, more pertinently, speed? Who might ride a slice of luck deep into the playoffs?

Among the rest of the pack, it’s hard to look further than Team Penske’s Brad Keselowski and Joey Logano. While the 2012 champ hasn’t won yet and his four top fives, eight top 10s and 259 laps led don’t exactly scream championship form, Keselowski rode his way to a Championship 4 berth last year. The run included a playoff win at Talladega which remains one of his best tracks.

Logano, meanwhile, has put a terrible 2017 season in the rear view with a consistent start to 2018. He’s recorded a huge victory at Talladega (there’s a theme here) to go along with five top fives and 11 top 10s. That’s good for third in overall points.

Next come Denny Hamlin and Clint Bowyer (who already has a morale-boosting win) and Kyle Larson, the best of the Chevy stable. All three could be in contention down to the round of eight. And then there’s Jimmie Johnson who, despite some poor form in 2018, can never truly be ruled out.

Outside of those names, there are the likes of Chase Elliott, Ryan Blaney, Aric Almirola and Kurt Busch who could also sustain a challenge. Each of them have shown enough to win races at the right time and advance through the postseason.

Either way, there’s enough racing between now and Homestead-Miami to know plenty can change as we head inexorably to September’s ten-race playoff. The question is who can wrestle themselves into consideration.

With so many contenders, finding that fourth will be fun to watch.

This past weekend, IndyCar held a doubleheader race on the Streets of Detroit with full points-paying races on both Saturday and Sunday afternoon. It’s a tradition that began five years ago. In the first two years (2013-2014) we saw three separate doubleheader weekends (The Raceway at Belle Isle, Detroit; the NRG Park Stadium Circuit in Houston and the Exhibition Place in Toronto) on the IndyCar Series schedule. In the last three years, the number of doubleheaders has been reduced to one – Belle Isle.

All of that got me thinking: How much fun could a NASCAR Cup Series doubleheader weekend be? You could even run one race in the daytime and one at night. By my calculation, we visit 13 tracks twice so there’s ample opportunity to find a way to make it happen. If ever there was a way to shorten the overall schedule, doubleheaders would be a great way to do it.

It seems a forlorn hope these days. But then again, there are other changes that have happened you might not have expected. Here’s hoping this idea might be one the powers that be are already considering.

In Detroit’s first race of two, gritty veteran Scott Dixon won his 42nd open-wheel race. That tied him with Michael Andretti for third on the all-time wins list. The only two drivers ahead of him are A.J. Foyt (67 wins) and Mario Andretti (52) – some pretty illustrious company.

But in the second race of Detroit’s doubleheader, it was Ryan Hunter-Reay who took the checkered flag. It’s his first IndyCar Series race win since August 23rd, 2015 some 41 races ago – a lengthy drought for the 2012 champion. Hunter-Reay took advantage when Alexander Rossi ahead of him lost control and went off course.

“This has been a bit of a long time coming and that was going to be a heck of a fight at the end there,” said Hunter-Reay. “A good thing we pressured [Rossi] into it and we’re here in Victory Lane. Awesome.”

Hunter-Reay’s race strategist, Ray Gosselin, was even more effusive on the team radio during the post-race cooldown. “I will show you the lap times later,” he said. “That might have been your best drive ever.”

If ever there’s a way to break a long winless slump, driving an essentially flawless race is just the way to do it.

FOUR: Next Up, Michigan International Speedway

Before the off weekend, NASCAR heads to Michigan International Speedway for the first of two trips in the next nine races. Sunday, June 10 will mark Cup race number 98 at the D-shaped, two-mile oval.

Larson, 2003 Cup champion Matt Kenseth and 2004 title winner Kurt Busch have the most Michigan wins among active drivers with three. Ryan Newman, Hamlin and Logano all have a pair of victories.

Kenseth has the most top fives (14) and top 10s (20) but he has run 37 races at MIS, three more than his closest competition. As he is most every week, Jimmie Johnson is a factor in the current driver top marks as well. He dominates in laps led (687) with Kurt Busch (448 laps) a distant second.

Larson’s three wins have come in the last three races run at Michigan so he’ll certainly be one to watch this weekend, despite his manufacturer Chevy’s comparative woes this season. Another will be Chase Elliott who has three second-place finishes in four career races there.

Finally this week, I have to mention one of those truly “only in racing” moments from Sunday’s IndyCar Series race in Detroit. As I’m sure you’ve seen by now, the alternate driver of the Chevrolet Corvette ZR1 pace car pulled out of the pits, hit a bump and basically totaled it into the wall. The driver was General Motors Executive Vice President of Global Product Development, Purchasing and Supply Chain Mark Reuss. Luckily, the driver and his passenger, IndyCar Series official Mark Sandy, were unhurt in the incident. But I’d wager a guess he had a lot of ribbing to contend with on Monday morning!

Just in case you didn’t see it, here’s the clip:

The upshot was a frustrating 34-minute delay for the drivers before the race finally got underway. Compounding matters, it was due to what was essentially a completely avoidable error.

The bizarre nature of the incident also made me think of Juan Pablo Montoya spinning under caution and wrecking into the back of the jet dryer at Daytona International Speedway a few years back. It’s a wreck that was about as bizarre as you can get.

Is anyone really sure the Big Three will be in the Phony Phour?

If Chevrolet had a car to compete with Ford and Toyota, Kyle Larson would be the 4th. He has carried Chevrolet with his racing talent but does not have a chance driving a Chevy.