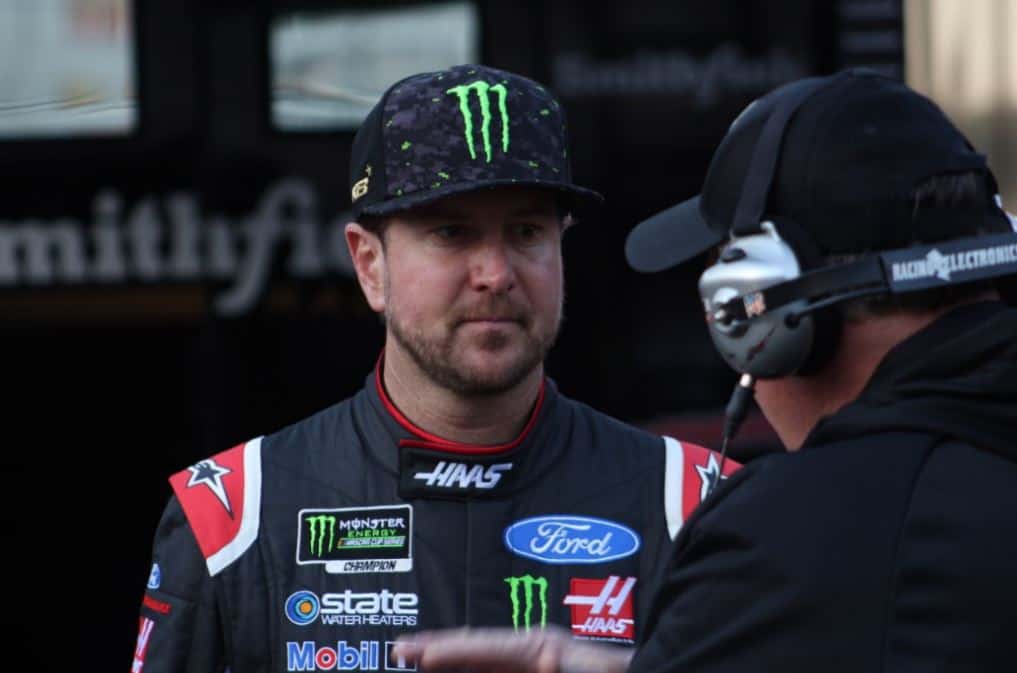 Stewart-Haas Racing did not come away with the victory at Pocono Raceway on Sunday (June 3).  However, the team’s drivers have maintained a high level of performance they are carrying with them straight into summer.

Kevin Harvick leads the Monster Energy NASCAR Cup Series with five wins through 14 races.  Clint Bowyer earned a victory of his own at Martinsville Speedway, breaking a long winless drought of over five years.  Newcomer Aric Almirola is quietly putting together a career year with quality finishes.  The No. 10 team came from deep in the field to finish seventh at Pocono, Almirola’s first top 10 at the Pennsylvania track in 12 starts.

Then, there is Kurt Busch, who finished 19th in Sunday’s race with a car that seemed a little bit off all day.  It is a mildly disappointing result for Busch, who has otherwise put together a solid season.  The only really poor finish for the No. 41 team came at Las Vegas Motor Speedway as a result of a crash.  Otherwise, Busch finds himself seventh in overall points with seven top 10s and two playoff points in the bank.  While he has some ground to make up on Harvick, his teammate, Busch will most likely be joining him in the playoffs come September.

The real question is whether Busch will join Harvick, Bowyer and Almirola at SHR next year.

Sunday’s race happened to have an unofficial fifth SHR entry, piloted by Cole Custer, the 20-year-old who races for the team in NASCAR’s XFINITY Series.  After winning the final XFINITY race of the season last year, Custer has been a consistent top-10 performer in 2018.  In the last 10 races, he has scored nine top 10s, including his two most recent back-to-back top fives this week at Pocono and last week at Charlotte Motor Speedway.  He made his second career MENCS start on Sunday, finishing 26th.  While Rick Ware is listed as the official owner of Custer’s car, a team that usually fields Chevys, showing up to the track with a Haas-sponsored Ford suggests Ware’s team received a good bit of technical support from SHR.

Sooner or later, it seems Custer will move to Stewart-Haas Racing’s Cup Series team.  Accordingly, rumors have been swirling for a while that Busch might eventually be the odd man out.  Last August, SHR announced that it would not be renewing Busch’s contract, only to release another statement the same day that the team did, in fact, want to bring Busch back for another year.  The hold-up seemed to be some stipulation in the driver’s contract, possibly either relating to his salary or Monster Energy’s continuing status as a sponsor.

Whatever the case, SHR did not resolve Busch’s status with the team until December.  Busch and Monster both came back, but only for a one-year deal.  The short-term agreement raises the possibility of another contractual showdown for Busch, who will turn 40 in August.  If team owners Gene Haas and Tony Stewart decide the timing is right to move Custer to the Cup Series in 2019, Busch may have to look elsewhere for his next ride.

However, the events of 2018 suggest that the timing is not right to replace Busch with a younger driver.  That is not intended as a knock against Custer, who should be one of the top contenders for the XFINITY title this year.  But it is a critique of the youth movement that has swept the Cup Series recently.  Back in February, the crop of young drivers who seemed primed to bust down the door and race for wins was the most exciting storyline NASCAR had going for it.  However, veterans have ruled the track this season.

So far in 2018, Harvick, Kyle Busch and Martin Truex Jr. have combined to win 11 of 14 races.  Truex is the least experienced of the three, having run 21 less Cup races than Busch.  Yet Truex, with 455 starts to his credit, is obviously not new to NASCAR’s highest level.  Behind the three drivers with multiple wins are veterans like Brad Keselowski, Denny Hamlin and Kurt Busch himself, all in a prime position to reach the MENCS playoffs.

Joey Logano remains one of only two drivers under the age of 30 to have won this year.  The other, fifth-year racer Austin Dillon, has not scored a top 10 since March.

Most of the young or new drivers seem to be struggling to keep up with their veteran competitors.  William Byron, who found almost instant success in both XFINITY and the Camping World Truck series, has come up against a much steeper learning curve in MENCS.  Darrell Wallace Jr.’s results have been all over the board.  Both rookies face an uphill climb to make the playoffs.

Even the second and third-year drivers have experienced their share of problems. Penalties and an ongoing struggle to close out races have burned Chase Elliott.  Erik Jones has posted decent results with Joe Gibbs Racing, but the No. 20 team has not contended for many wins and is not far above the playoff cut line.  Daniel Suarez is in even worse shape at 61 points behind the last postseason position.  The No. 19 team’s 20-point penalty, which it incurred after Dover, is going to loom large as Suarez tries to reach the playoffs.

The two young drivers who have done the best job of meeting expectations are Ryan Blaney and Alex Bowman.  Yet their seasons remain a work in progress, too.  Blaney has had fast cars but has struggled with consistency in 2018.  Bowman has battled through the issues that all of the Hendrick Motorsports drivers have faced and still needs a little more speed. But he has a shot at making the postseason if the No. 88 team plays its cards well.

Busch, meanwhile, has arguably exceeded expectations this season.  The uncertainty of his future at SHR, combined with the bleak outlook for Ford going into the season, seemed to set him up for a tough year. Yet he is among the drivers whose playoff chances are good with 12 races left in the regular season.  Yes, it has been a while since Busch has won, but he is hardly alone in that department.  Besides, it is not like Busch is in Suarez’s or Byron’s position, where a win might be the only way that gets them to the playoffs.

If Custer takes Busch’s place at SHR next year, he will probably be in the position that Byron is in now – fighting the ups and downs of Cup Series racing with just a small chance to make the playoffs.  Remember that Stewart-Haas Racing will also join the rest of Ford’s Cup teams in switching to the Mustang next year.  Hendrick Motorsports’ inexperience with the Camaro has made Byron’s rookie year extra difficult.  It would be unwise to throw Custer into the same situation.

SHR should not have any major sponsorship concerns with Busch either, even if Monster leaves.  The team has done a good job of finding sponsors for Bowyer this year, and Haas has never been afraid to self-sponsor his cars if he needs to.

In fact, Haas has been Custer’s main sponsor as he has risen through the ranks of NASCAR.  That means there is nobody outside SHR who might try to fast-track Custer to the Cup Series in order to get more exposure for the sponsor.  Not to mention that Custer’s father is an executive with SHR, too.  Given his familial ties and no outside sponsor, it is unlikely that Custer would try to jump to another team for an opportunity to race in the Cup Series.

Therefore, Busch should return to Stewart-Haas Racing in 2019, racing as long as he wants to. Sure, the 2004 Cup champion may not be contending for wins and championships at the rate that he used to be.  Yet a driver who is past his prime is not the same as one who is totally over the hill to the point of no longer being a valuable asset for a race team.

Custer will make SHR strong in the long term, but Haas and Stewart will soon have to decide who is the best fit for the immediate future.  The answer should be Busch.

Do you know if this Cole Custer is related to Joe Custer?

Do you think Kurt is past his prime? Harvick is older, and having a career year….

His record doesn’t matter. It depends on how much money he can scrounge up.