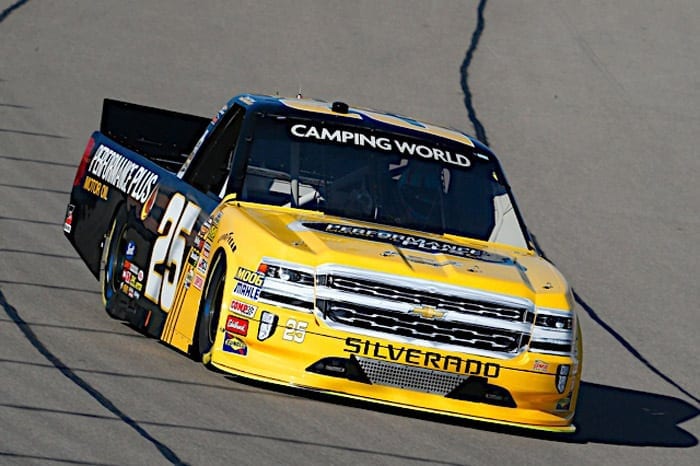 Dalton Sargeant began his racing career as many do, driving go-karts, in 2006. He’s raced all different types of cars, tested Formula Open-Wheel cars and even boasts a second-place finish in the Snowball Derby.

In 2015, Sargeant made his Camping World Truck Series debut at Bristol Motor Speedway, starting 18th and finishing 10th. He posted a best finish of ninth at New Hampshire Motor Speedway in four starts that season. In that same year, he ran the full K&N Pro Series East schedule, scoring six top fives and nine top 10s in 14 races; he ended up fourth in the championship standings.

Fast forward to 2018 and the 20-year-old took the next step, signing on to pilot the No. 25 Chevrolet for GMS Racing. He had six starts in the Truck Series under his belt coming into Daytona International Speedway to open the year. But in seven races this season, he’s already got two top 10s, including a best finish of sixth at Las Vegas Motor Speedway. He sits ninth in the championship standings, 15 points behind teammate Justin Haley, who currently holds the final playoff spot.

Sargeant took some time out at Kansas Speedway in May to talk about his short time at GMS Racing and the goals he and the team have set for his rookie season.

Beth Lunkenheimer, Frontstretch: How did the deal with GMS come about?

Dalton Sargeant: It all started out the middle of last year. I was approached after having a handful of good runs in the ARCA Racing Series and picked up a couple wins. I was able to be approached by our team president, Mike Beam, and team owner Maury Gallagher, and they asked me if I’d come and drive for them.

That’s something that’s pretty special when you have a team that’s as large and high profile as GMS come to you looking for you to drive for them. That’s something that I don’t take lightly. I’m really honored to be a part of GMS Racing, and I just want to go out there and do my best, not only for myself but for the guys here and the whole organization.

Lunkenheimer: Did it help your confidence a bit to have a couple starts under your belt before coming into Daytona earlier this year?

Sargeant: I’d say so. The biggest thing is trying to get the flow together with your team and working with each other, and the crew chief figuring out what I like in the car. Every driver is different. It definitely takes a little time, but we’ll just keep working at it and getting better and better each race.

Lunkenheimer: What are some of the biggest challenges you’ve faced trying to get used to the team?

Sargeant: One of the biggest things is that as you move up, each series gets harder and harder. I’d say the top three NASCAR series are obviously a good deal tougher than your short track racing is. There’s definitely a lot more trucks here each weekend that can run up front and have the ability to do so. You go from racing five or six guys for the win to racing 20 guys for the win. That’s something that’s a little tougher, not only on the track but also mentally, reaction-wise.

As a whole, everything is a lot more challenging, and you’ve just got to be on top of it. Everything comes into play — preparation, execution. There’s a lot that goes into it outside of what I do. Everybody on the team has to do a good job. It takes a lot of luck sometimes to be perfect, but that’s what everybody strives to be, and if they are, that’s when you have a good day.

Lunkenheimer: I’m guessing you probably lean on Johnny Sauter quite a bit since he’s got a substantial amount of experience. Is there anyone else besides him that you’ve leaned on?

Sargeant: I’d say Johnny is my main go-to guy, but as a whole in the Truck Series, I feel like a handful of drivers – Stewart Friesen, teammate Justin Haley – all these guys have been really helpful. I feel like everyone has been really honest trying to help me out, and I feel like that’s really good for GMS.

Lunkenheimer: What’s the best advice you’ve been given since you started racing?

Sargeant: Man, there’s so much; there are things I try to remember every day. It’s tough to say. Johnny is pretty crazy; one minute he’ll be screaming at you to do one thing, and the next it’s something else. He’s hard to get a hold of, but once you get a hold of him, he’s always there to help you out. I’d say the best thing would be to just race each other, race these guys how you want to be raced.

Lunkenheimer: How close do you think your team is to racing into the top five?

Sargeant: I think we’re pretty close and we’re knocking at the door. It all comes back to the execution. I feel like so far this year we’ve had some struggles. I’ve made some mistakes, as a team we’ve made some mistakes, we’ve had a couple mistakes in the pits. But I feel like once we put all these things together and keep the mistakes to a minimum, we’ll be in much better shape and hopefully be able to put up some top-five finishes.

Lunkenheimer: What kind of goals and expectations do you have for the remainder of the season?

Sargeant: I’d like to win somewhere around three to four races for my first year. Competing as a rookie, I’d like to win the Rookie of the Year award, and it would mean a lot to me if I was able to go to Homestead[-Miami Speedway] and be in the final four of the championship. It’s always a toss-up having the four guys racing one race for the championship, but just to be able to make it to the final four would be a huge accomplishment for myself.

Lunkenheimer: What were your thoughts when you heard NASCAR might be up for sale?

Sargeant: I don’t pay too much attention to it. I feel like everyone is trying as hard as they can to make everything better. Maybe it would be cool if they sold a small portion just to get some new ideas and maybe some outside help. It doesn’t affect me too much, but if it helps the sport as a whole, that’s great for everybody.

Lunkenheimer: If you weren’t racing, what would you be doing?

Lunkenheimer: If we dig into your playlist, what are we going to find?

Sargeant: A mix of everything, but probably mostly some dance music and a lot of rap.

Lunkenheimer: Do you have any race day routines?

Sargeant: Nothing too crazy. I try to stay hydrated and not eat anything too heavy. I’ve learned that in the past; you feel sluggish in the car. I eat a light meal throughout the day and try to be ready for it come race time.