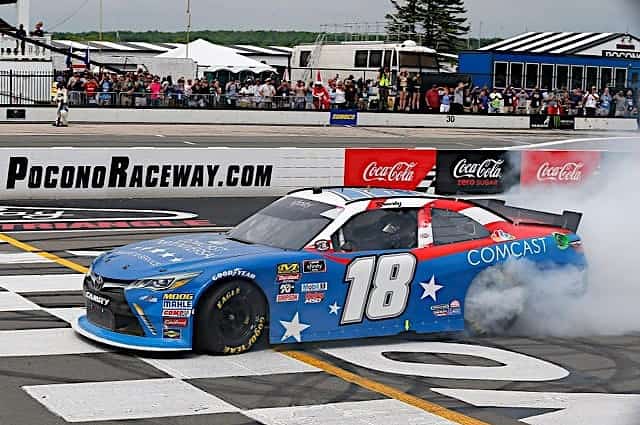 The No. 18 XFINITY Series Toyota Camry for Joe Gibbs Racing was the only vehicle listed this week in NASCAR’s penalty report after the weekend at Pocono Raceway.  Kyle Busch drove the No. 18 to victory in Saturday’s Pocono Green 250 Recycled by J.P. Mascaro & Sons, but the car failed the post-race height inspection, resulting in an L1 penalty.

Crew chief Eric Phillips was fined $10,000 and suspended for Saturday’s upcoming LTi Printing 250 at Michigan International Speedway. Since Busch has declared for Monster Energy NASCAR Cup Series points, he has no driver points to lose in this situation. However, the car will lose 10 points in the NXS owners standings. The No. 18 was leading prior to the penalty and will continue to post-penalty. The margin has been cut from 19 points to nine over Team Penske’s No. 22.

As reported on NASCAR RaceHub Tuesday night, JGR does not intend on appealing the penalty.

No Monster Energy NASCAR Cup Series teams were penalized at Pocono.  The post-race inspection wrapped up quickly and nothing of note was found during the Tuesday teardowns at the NASCAR R&D Center.

Wesley has been with Fronstretch since October 2017. He loves well-told stories in whatever format he finds them. Aside from NASCAR, he enjoys reading, country music and OKC Thunder basketball. He has a BA in Liberal Arts/English and currently lives in eastern Oklahoma, where he works as a freelance writer/editor.
@@CoburnWesley
Previous Beside the Rising Tide: Seismic Shifts Ahead
Next F1 Midweek: Who Will Power Red Bull in 2019, Renault or Honda?