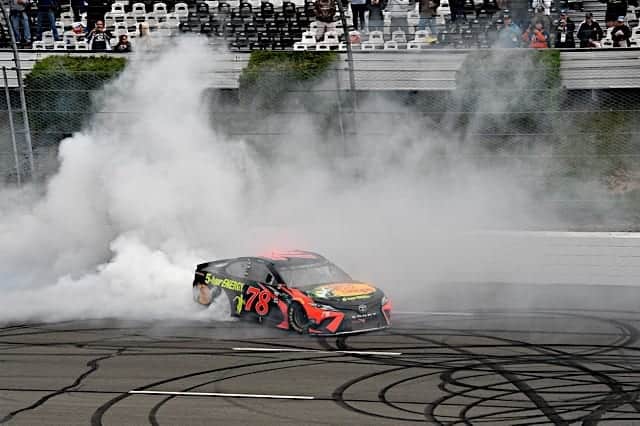 The first 14 Monster Energy NASCAR Cup Series races of 2018 have resulted with 11 of them being won by Kyle Busch, Kevin Harvick or Martin Truex Jr.. Even the non-points-paying All-Star Race was claimed by Harvick.

The question this week: So is it good for NASCAR to have a few dominant drivers or is parity the way to go?

Not everything in life needs to be unpredictable. Slasher films always kill off most of the cast, grocery stores are always out of at least one thing on your list and Taylor Swift will sell a bazillion albums no matter what she sings about. Many of us accept these situations as nearly inevitable and go on about our day.

But predictable is not a good look when it comes to NASCAR race winners.

What’s more astounding is that Busch, Harvick, and Truex also possess a total of six runner-up finishes. Since anyone with four wheels and a seat could’ve won the two restrictor plate races, it’s easy to discount them in the stats – which honestly just makes the season look even more lopsided.

This is something NASCAR could definitely do without. At a pivotal time, when fans are clamoring about “boring” racing, TV contracts are nearing their conclusion and the sport has been rumored to be up for sale, three drivers beating the snot out of the rest of the field makes NASCAR look a whole lot less fun.

NASCAR benefits from parity. Despite the fact that attendance numbers aren’t released, it doesn’t take a great deal of effort to notice the crowds at restrictor plate races are substantially larger than the ones at most other tracks. I have a hard time believing that they all show up just for the massive accidents.

It’s more probable that the draw is the competitive and unpredictable nature of such racing. The eventual winner is in doubt all the way up until the end. Compare that to somewhere like Phoenix (ISM Raceway), where the doubt regarding the eventual winner (Harvick) seemed to end by the time he landed out west for the event.

NASCAR has experienced these types of years before and they aren’t looked back on too fondly by those who were around when they took place. In 1992, the sport saw one of its greatest championship battles. The following year, Rusty Wallace, Mark Martin and Dale Earnhardt battered the competition, winning 21 of the 30 events. In fact, only one other driver managed to reach the Winner’s Circle during the entire second half of the season.

That’s exactly the type of domination that will turn people off to any sport. I can’t recall much about baseball in the late 90’s outside of the New York Yankees winning a lot. But I remember watching the Arizona Diamondbacks surprise everyone by winning it all amidst the dominance.

Why does that stand out in my mind? Once again, parity.

The Cup Series saw 19 different drivers visit Victory Lane in 2001 and 2002. It wasn’t simply all about close finishes. Much of the excitement came from the unpredictable outcome of the races during those years. Nearly half the field won an event in each of those seasons. Right now, I’m not convinced that half of the top 10 is all that likely of taking a checkered flag at some point this year.

I understand that this happens from time-to-time. A driver or few drivers catch a big wave of momentum and seem nearly untouchable for a period of time. It happens. But to actually claim that it’s a good thing or that the sport is somehow healthier because of it seems foolish.

No one wants to turn on their television on Sunday afternoon feeling like they already know who is going to be in front for the next three hours. Fans shouldn’t have to hope that some form of attrition befalls a dominant driver just so someone else actually has a fighting chance. NASCAR should have a wide variety of drivers chasing and winning the trophy each week.

History has shown us it’s better that way. -Frank Velat

We Need Another Hero

Having a select few dominant drivers is something that is good for NASCAR.

What’s the point of parity if no one knows or cares about the various drivers who win?

Across the sports spectrum, fans like to see a dominant athlete. For years, the PGA road the coattails of Tiger Woods as he kicked everybody’s butt every week. During Woods’ time away, golf struggled, but as soon as he was back and competitive again, people tuned in to see one of the greatest athletes of all time do his craft.

Many are griping now about how the NBA has had Golden State and Cleveland battle in the Finals for four straight years, and more are vocal about how the Cavaliers are outmatched. People are still watching it though because you’ve got three star athletes competing in Lebron James, Steph Curry and Kevin Durant.

If there was more parity in the NBA, and the Atlanta Hawks were playing the Phoenix Suns in the Finals, then people would be bored by the games because they wouldn’t know anybody on the teams. I hardly keep up with the NBA, but I’ve watched parts of each of the Finals games so far because I want to watch a few of the best athletes of this generation.

Frank is wrong about the Yankees’ dominance — baseball was at its peak when New York was winning the World Series just about every year. No team has won back-to-back World Series since the Yankees did in the 1990s and its part of the reason that baseball has struggled since then. With different teams winning the championship every year, casual fans are unable to grasp on to who the stars are, so they don’t care which new team wins.

With Busch, Harvick and Truex winning nearly every week, casual fans, as well as people who know very little about NASCAR, will learn the names of those three superstars. They might even tune in to watch because they want to see three of the best athletes in the world in their prime.

NASCAR especially needs this after losing Jeff Gordon, Tony Stewart and Carl Edwards in the past few years. I didn’t mention Dale Earnhardt Jr. because he was only really dominant for one season. But Harvick is right: had Earnhardt been dominant, the sport would have continued its popularity surge past the mid-2000s.

Racing has always risen on the backs of superstars. The sport first started to grow during the days when Richard Petty, David Pearson, Cale Yarborough and Bobby Allison won just about every race. It continued to blossom in the era of Darrell Waltrip’s and Dale Earnhardt’s dominance. It rose to new heights when Jeff Gordon was the man to beat.

Sure, the 1992 season featured the greatest championship battle of all time, and it was truly a special moment to see the “Underbird,” Alan Kulwicki pull out the championship. But it was the dominance of Earnhardt in the previous seasons and of Bill Elliott and Davey Allison that season that made Kulwicki’s accomplishment so monumental. Had there been more parity in that time and Kulwicki had been on an equal playing field with those guys, then some of that year’s magic would have been lost.

You need a Goliath in order to have a David. I hate both teams, but the most entertaining Super Bowl of my lifetime was when the .500 New York Giants upended the undefeated New England Patriots, the heavy favorites. Had the Patriots not been as dominant that season or in years prior, then the game would not have been as big of a deal.

The point is that what Busch, Harvick and Truex are doing now will pay off down the road when a small team pulls through for a huge win. Plus, those three are putting their names out into the mainstream and hopefully making more people pay attention to NASCAR. So instead of complaining about seeing the same three cars at the front every week, how about we appreciate their greatness while they are still in their respective primes. – Michael Massie