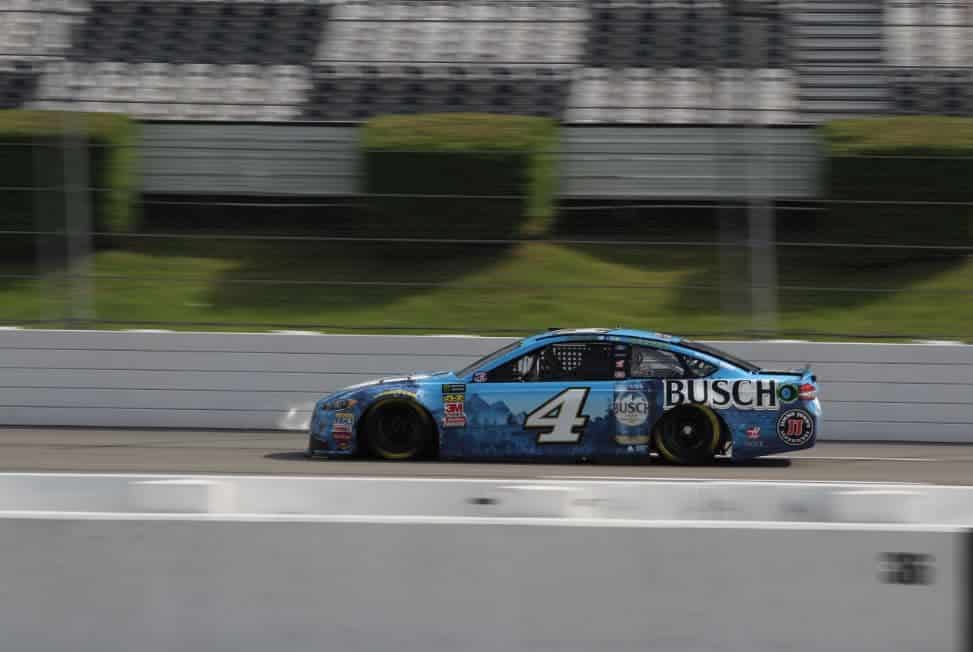 NASCAR heads to Michigan International Speedway this weekend for the FireKeepers Casino 400. Sunday’s race is the first of two at Michigan on the Monster Energy NASCAR Cup Series schedule.

FanDuel debuted its new daily fantasy NASCAR contest at Talladega a few weeks ago and it will continue on throughout the 2018 season. Go to fanduel.com/frontstretch to sign up FREE and you’ll get a FREE contest every night until you win $$$! You literally can’t lose your first time out.

Also, with only 0.1 points awarded for each lap led by a driver, the need for a dominator is less important when building a winning lineup. The 200-lap race will only have a total of 20 points up for grabs in this category. Take note when building your roster and focus on mid-pack drivers who can climb up toward the front on race day.

Here are a few drivers to keep an eye on for this weekend’s race.

Harvick has seven top-five finishes in the past 10 Michigan races. That includes four consecutive runner-up finishes in 2013 and 2014. Although his only win at Michigan came back in 2010, before the track was repaved, he has still run extremely well here over the past few seasons.

Harvick is looking for his sixth win of 2018 and the No. 4 Ford has been its best on intermediate tracks. Keep putting him on your roster until he starts cooling off.

Larson has five career wins at the MENCS level and three of them are at Michigan. In fact, he has won the last three MIS races in a row and is going for a historic four-race win streak this weekend. He would join Hall of Famer Bill Elliott as the only other driver in series history to win four consecutive races at Michigan.

In 2018, Larson has by far been the best-performing Chevrolet. His second-place finish last weekend at Pocono was his third runner-up result of the season; the No. 42 team is knocking on the door. A win this weekend would be the manufacturer’s first since February’s season-opening Daytona 500.

In only four starts at Michigan, Elliott has become one of the track’s most successful drivers currently competing. Even though he has yet to find Victory Lane, the youngster has an average finish of 3.5 in those events. He finished second in his first three starts and eighth last August.

Hendrick Motorsports has been a tick off on speed but looks to be on the upswing after a good showing at Pocono. That should put Elliott back in the running for another top-10 finish.

Jones continues the Michigan youth movement. In his first career Cup Series start at the track last spring, he finished 13th. He improved upon that when he returned last August with a third-place result.

Jones’ finishing positions the past two weeks are no indication of how his team has performed. At Charlotte, he had a top-10 car, but an unfortunate pit road incident stunted the day. As for last week at Pocono, Jones was wrecked by Joey Logano on a late-race restart after running in the top 15 most of the event. At some point, Lady Luck will give the No. 20 team a break and when it does… he’s a top-10 performer.

McMurray was one of the fastest cars at Charlotte during last month’s Coca-Cola 600 and finished sixth. He followed that up with a great third-place qualifying session at Pocono, starting the race on the second row. Unfortunately, McMurray fell off as the race progressed and ended the day in 15th.

Now, the veteran will look to bounce back at a track where he has been quietly consistent over the past two years. McMurray has four straight top-10 finishes at Michigan, including a top five in this race a season ago. Expect the No. 1 Chevrolet to ride the coattails of teammate Larson near the front.

Newman’s relatively cheap salary allows the ability to bring additional top tiers into a FanDuel lineup. That’s because he is currently riding a cold streak. In the last four races, his best finish is 25th. Although there was a little bad luck involved those numbers could push people off him for Michigan.

But don’t be fooled. Newman finished 15th in this race last year and fourth last August. The Richard Childress Racing driver has a history of making magic happen in lesser equipment and could be a good, sneaky add this week. 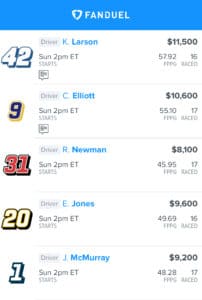